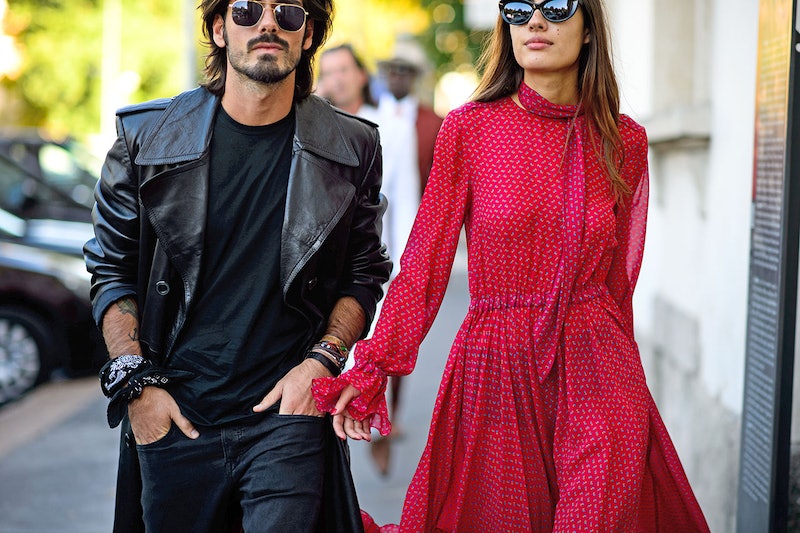 Remember, in Sex and the City, when the pre-nup with which Trey blindsided Charlotte nearly ended their whirlwind relationship? Or when Carrie and Aidan broke up, and the love letter she thought she was going to receive was instead replaced by an eviction notice from the ex-lover who now owned the apartment she had lived in for decades? Both moments made the fictional women portraying them look a little naive, but the truth is that the mixing of money and love is a tricky proposition, one that can cause many of us to prefer sticking our heads in the sand to addressing the issue; however, finances have been cited as the second leading cause of divorce, so avoidance is probably not a wise strategy for those looking to live happily ever after. Here are four things you should discuss with your partner before taking the plunge, as well as some advice for how best to broach each subject.

According to one survey, people are more embarrassed to reveal their debt balance than they are to reveal things like their age or weight; however, this conversation is an important one given that the amount of debt your partner carries can affect things like how you budget your money as a family, the interest rates you’re given on loans (if your partner’s debt has negatively affected their credit score), and more. (The reverse is also true; if you carry debt, it will affect your partner’s quality of life.) It’s critical that this topic be met head-on with the utmost honesty well before you walk down the aisle; being blindsided by a secret and shameful debt after, say, baby #1, is a sure-fire step towards divorce court.

We suggest broaching this particular topic fairly early on in a committed relationship in which it’s generally understood you’re both in it for the long haul--before engagement or moving in together, if possible. Assure your partner that you are not coming from a place of judgment, that you are open to creating a collaborative--or at the very least supportive--plan to handle debts, and that you expect the same from them; then, be brutally honest about every single ounce of debt you carry; the more scared you are to have this conversation, the more critical it likely is.

Takeaway: You should leave this conversation with a clear and honest picture of both your partner’s debt balance and credit score, along with a mutually agreed upon plan for tackling debts moving forward.

Does your partner live in the moment, spending whatever allows them to maximize their enjoyment of the present, or are they uber-thrifty, pinching every penny to best benefit their future? Opposites may attract, but people with opposite financial philosophies often end up fighting frequently and/or splitting up over their financial priorities. According to Forbes, the likelihood of divorce increases by 45% when a spouse feels their partner is spending money foolishly.

While it’s important to have this talk in the most honest, open, and non-judgmental manner possible, you can also observe your partner’s spending behavior for clues as to their money mindset and, in this case, actions may speak louder than words. For example, we definitely think we have a long-term philosophy on money; however, the Net-a-Porter charges we make monthly might tell a different story. It’s important, therefore, to be honest with yourself before having this conversation as well. What are your values when it comes to money? Do you prefer to spend on vacations, or on possessions? Is it important to your happiness and sense of well-being to have a certain amount in savings at all times, or do you benefit more from being able to spend whatever you have at any given moment? Once you know these answers for yourself, only then should you broach the topic with your partner.

Takeaway: You should leave this conversation with a clear picture of how your financial philosophy matches up with that of your partner, as well as a clear ranking of mutually agreed upon priorities when it comes to spending your cash in the future (including everything from Starbucks coffee vs. homemade coffee to private school vs. public school).

Are you exacting in how you ‘balance your checkbook,’ while your partner takes a more haphazard approach to knowing how much they have in the bank at any given moment? Do you like your bills to be paid in advance, while they wait until the last minute to pay theirs? These types of differences in financial habits may drive you crazy over time, so it’s important to expose them before making that walk down the aisle.

We suggest monitoring each other’s financial habits for a month to get a sense of who prefers what. It might feel intrusive and annoying, but it will be an oh-so-helpful exercise for avoiding future conflict. Once you’ve established where you both stand on these types of issues, you can build a plan for managing your shared finances with which both people are comfortable. For example, if you are ‘better’ at managing money (read: more Type A), it might make sense for you to be the one who handles things like paying bills, balancing the budget, etcetera, once you officially become a team.

Takeaway. You should leave this exercise and conversation with a clear plan for who will handle what when it comes to your new family’s finances.

We have a friend who recently lost her fiancé when she asked him for a pre-nup; however, we say, “good riddance!” (though we said that with a lot more sympathy when talking to this friend). It’s important to be transparent about the assets you’re bringing to the table, and to have full knowledge of all assets your partner owns. It’s then even more important to discuss your viewpoints on the if and how those assets should or should not be shared within your partnership. You may feel, like SATC’s Charlotte, that “marriage is supposed to be about love and happiness,” but it’s important not to be so blinded by romance that you set yourself up for future drama and trauma.

Perhaps strangely, this topic can be even trickier than talking about things like debt or credit scores. Though we live in an uber-materialistic culture, it’s still taboo to ask someone how much, exactly, they have. We suggest reserving this conversation for a little later in the game than some of the others, as it’s important to establish that each person is in the relationship for the ‘right’ reasons before delving into an accounting of assets. With that said, this talk should still take place before an engagement conversation happens, as it can be far more traumatic to break things off once they’ve officially moved towards marriage than at some point before they go so far as that diamond ring. It’s important to keep in mind when having this conversation that there is something inherently offensive about telling someone you love that you want to protect your possessions from them; use tact when broaching the subject, and monitor your own reaction to their stance on the subject to maximize rationality and minimize emotionality. Though it’s far from romantic, you may want to involve legal mediation to aid in this endeavor. Here is more advice on how to ask your partner for a prenup. Takeaway: You should leave this conversation with a clear understanding of the assets your partner owns, and how they plan to protect or share them. Once you’re engaged, this plan should be made legal.