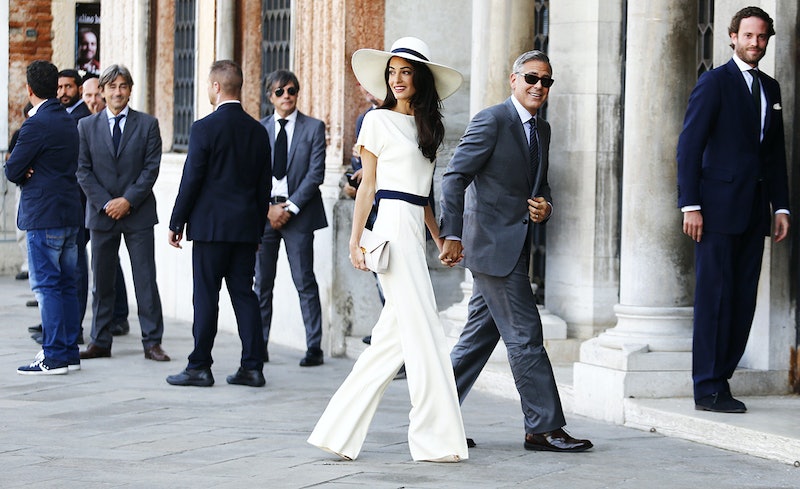 According to the app Happify, the most blissed-out couples have been married for under five years and have no children. If you’re among that demographic, congrats! If you’re not, or if you foresee yourself crossing over into a long-term partnership or having a family at one point, fret not, as there’s still good news—happiness in relationships, just like individual happiness, is something you can work to achieve. Here, eight research-backed methods for becoming one of those happy couples of whom everyone is jealous (and not just on Instagram, but in actual life).

According to the New York Times, "New experiences activate the brain’s reward system, flooding it with dopamine and norepinephrine. These are the same brain circuits that are ignited in early romantic love, a time of exhilaration and obsessive thoughts about a new partner." So while butterflies inevitably fade, studies show you can inject new energy into your relationship by regularly trying new things with your partner. Try date night activities that are outside of your comfort zone, rather than spending another night in watching Netflix or simply walking over to your favorite neighborhood restaurant. It's fine to continue with these beloved activities (after all, fall TV!), but if you want to keep the flame alive, it's advisable to mix things up every once in a while.

According to research conducted by Terri Orbuch, a psychologist and author of the book Finding Love Again: 6 Simple Steps to a New and Happy Relationship, one of the biggest learnings from her divorced clients was that they wished they had been more affectionate toward their spouse, or that their spouse had been more affectionate to them. Dr. Orbuch recommends performing one small act of kindness for your partner each day, be it a verbal affirmation (something focused on a positive attribute they possess or a positive feeling you have about them) or a physical action (like folding their clothes, giving them a hug). Taking specific note of the small things your significant other says and does to make you feel loved is important, too, as negative interactions are more naturally notable to our brains than are positive ones.

Dr. Orboch's research also revealed that the happiest couples made time to talk about things you might talk to your boyfriend about in the early stages of dating—dreams, values and goals. She recommends you commit to spending 10 minutes per day discussing with your significant other something that does not concern your job or other practical life demands. Ask your partner questions about their past ("What's your favorite memory from childhood?") and encourage them to share their bolder visions for the future ("What would you do tomorrow if money was no object?").

Communication is key in relationships, and because you are two separate people, with separate world views, perspectives and goals, chances are that communication sometimes manifests as an argument. If you're fighting small fights, often, this can be healthy, as it means neither partner is letting resentments build up. That said, the key to a "good" fight is to really listen to your partner's point of view from a non-defensive place, and to try to look at the situation not just from their perspective, but from a non-partial, third party perspective. Also, it's important to remember that you likely suffer from a closeness-communication bias, which means that you think you're communicating your perspective to the people with whom you're most intimate better than you actually are.

Couples who laugh together, stay together, according to one study. Apparently, remembering times in which you shared a giggle in the past helps increase happiness within a relationship, as well.

This one has a few caveats. In news that's sad for discarded single friends everywhere, it turns out that couples who hang out with other couples feel closer to one another as a result. More sad news, for divorced people, is that hanging out with friends who have split makes couples 75% more likely to divorce.

Generally speaking, though, it's assumed to be healthy for any relationship for couples to spend time apart, with friends and family who are outside of the relationship bubble. This way, you're not putting all of your expectations and needs onto one person—author Bella DePaulo articulates the dangers of doing exactly that here.

On another note, couples who prioritized others in the sense of parading their relationship for them online are not happier than couples who keep it a little more low-key. Read more about this fascinating phenomenon here.

Consuming a similar amount of alcohol as your partner increases the odds of success in a relationship; however, if you and your significant other do not have similar boozing habits, there could be trouble down the line.