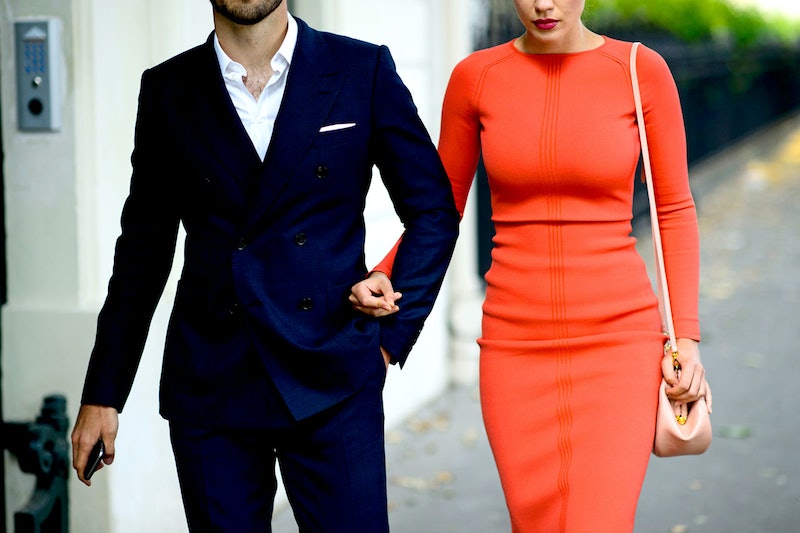 In this series we explore common—often overused and unsolicited—romantic clichés. Let us know your thoughts in the comments below.

If you are a woman, you're likely told from a young age to wait for “Mr. Right.” The thing about this mystery gentleman is that he does not wear a sign. There is quite literally no way—other than a hunch or a gut feeling—to know if your current man (or whatever gender you're attracted to!) is the “right” one. And for that matter, there's no way for someone to know that about you either. And so, people sometimes marry the “wrong” people, even though they were searching for the “right” ones, and things get messy.

I started thinking about this over the holidays, when I was with an old guy friend who was catching me up on his life—including recent, very serious marital drama. He looked me straight in the eyes and said matter-of-factly, "I married the wrong person." Whoa. He put it so simply. And that decision set his life on a path that is, at least for the time being, in total disarray. It was a pretty alarming revelation, one that led me to pondering more deeply this so-called “right person.”

It wasn’t’ so long ago, just a few generations really, that people stayed in the town they grew up in their entire lives, giving them a rather small pool of potential significant others. The pickings may have been slim, but the odds were good. People paired up, put a ring on it and–voilà—insta-family. Today, the options are seemingly endless: Many people move wherever they want, travel often and have a phone filled with apps encouraging them to swipe right. The pickings are anything but slim, but those odds—well, they aren’t great. With so many places and ways to find a potential mate, it’s getting harder and harder to know what this "Mr. Right" looks like—let alone where he may be hiding.

So how do we know this "right" person when he walks through the door (or shows up on the screen)? Without any identifiable traits, it’s a total crapshoot, a risky bet at best. Personally, I’ve always felt that I haven't met my so-called Mr. Right only to pass him by—I don't have "the one that got away" in my past. This belief has always made me feel at peace with my perennial singledom. I didn’t make a mistake, so there’s nothing to feel bad about. But if someone can mistake the wrong person for the right one, can’t the opposite also be true?

It’s a funny business, this assumption that there is a right or wrong person for each of us, especially because people often change as they grow—meaning someone can easily go from a good match to a bad one. And if we’re being honest, isn’t the entire concept a bit archaic? The notion suggests there is only one correct person for everyone, which in today’s world feels about as realistic as a Disney fairy tale. One could argue there are several "right" people for everyone, and different "right" people for different periods in one’s life. The concept of Mr. and Mrs. Right also suggests that once you come upon this mythical person, the relationship will be smooth sailing—and anyone who has ever been in a successful long-term relationship knows that to be absolutely untrue. Right person or not, relationships take serious work, sacrifice, commitment and patience.

Is there anything my guy friend could have done to marry the "right" person? My gut tells me the answer is no, but maybe that’s okay. Perhaps he didn’t actually marry the "wrong" person—maybe he married the person who taught him what he really wanted, someone he is now free to find. In the end, is there anything any of us can do to avoid the "wrong" people? It's hard to say, but as a true believer in listening to one’s gut when making big decisions, I’m willing to bet people often know they’re making a mistake while they make it. They just often don't want to accept it.

Maybe there is no wrong or right person for any of us. There is, instead, good and bad luck, good and bad choice, good and bad timing. Is it possible I missed someone along the way? Cast aside a person who could have been a good fit for me? I’m sticking with no, but the truth is someone who once walked out the door could come knocking at a time when I’m more ready to answer. Anything is possible—more often than not, a wrong can almost always be righted.