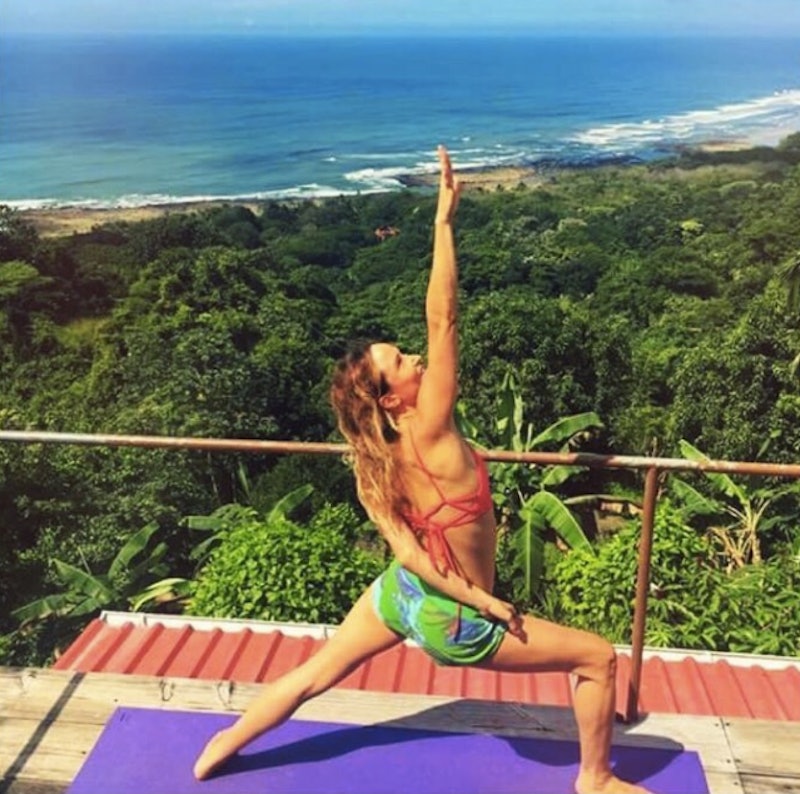 A month shy of my 38th birthday, I find myself in a bit of a funk. Maybe it's because I didn't make my yearly pilgrimage to an exotic locale over the holidays, or maybe it's because it's January, and January feels like one long Monday. Nonetheless, I feel blah. I just don't know exactly why. But I do know that whenever I get that feeling, I have to do something that scares me a little—something that forces me to the edge of my comfort zone.

So before I can talk myself out of it, I book a three-week solo adventure to Costa Rica—Santa Teresa to be exact. It's the dusty little surf town where my love affair with the ocean began. The forgotten strip of earth I found myself returning to again and again after college with my best friend as we backpacked through Central America. That trip is planted firmly in my memory as the happiest and most free I've ever felt.

Of course I expect things will have changed, but nothing prepares me for what I witness when Costa Rican Sean Penn (aka my taxi driver) drops me off at my Airbnb. The town has exploded with chic restaurants, organic cafes, fresh juice bars and deeply tanned expats speaking a mélange of languages.

As luck, or destino would have it, my temporary home consists of three geometric domes surrounding an all-white open-air bar that looks like it's been plucked straight out of the Greek islands. The owner, a Chilean woman named Marcela (with whom I surely shared a past life), welcomes me with her contagious laugh.

We become fast friends—despite my B-minus Spanish skills—and within a few days I have a position as a cocktail waitress at her "Bringing Sexy Back" Thursday night party (apparently JT isn't the only one).

Each morning, I wake just before dawn, eat a giant papaya and pad barefoot down to the beach balancing my surfboard carefully on my head. The ocean, warm and inviting, immediately returns me to the previous October when I lead a group of women back to their hearts on one of my creative adventure retreats in the north of the country, Tamarindo. During our final sunset surf session, as the sea swelled beneath me and the sky exploded with color above me, I realized how much my entire being had been craving a slower pace, a deeper connection with the natural world and myself. Watching the sun sink below the horizon, I whispered a little intention to myself, "I don't know how and I don’t know when—but I'm going to live here someday."

I've long lived by the understanding that everyone, everything and every experience I create is a reflection of me in some way (which isn't always the easiest way to roll) but this time, this trip, I'm pleased to effortlessly attract an eccentric mix of kind, hilarious, spiritual characters who generously extend me invitations to dinners, sunset jam sessions, waterfall jumps, camping trips and dance parties.

As one week rolls into two, I literally feel myself opening—expanding with curiosity, bursting with inspiration, overflowing with faith in myself and in the good people of this planet.

And just when I least expect it, as I stand alone at the end of the path for a good 10 minutes trying to determine if I'm brave enough to paddle out into the huge windy surf alone, I hear a deep French accent, "You're Marcela's friend, right?" I whip my head around. His face covered in zinc, I almost don't recognize the high-cheekboned guy with the piercing blue eyes my Chilean soul sister introduced me to when we passed him in the street a few days ago. "Oh yeah," I say, suddenly remembering. "I'm Emily."

"Manex," he reminds me. "How does it look?" "Uhhh…" Big and windy and scary! "A little blown out," I offer nervously. "I sink will be good, no?" with a slight motion that I should follow. Or at least that's how I take it. The waves are nearly head high, but after about 20 minutes, the wind drops off, the water turns to glass and he's right, it is good.

His English is about as good as my Spanish, but I manage to find out that he's been living in Santa Teresa for nine years, is interested in expanding his consciousness and does just about everything from making sushi to leading adventure tours to property development.

Before I catch my last wave he invites me to dinner. And just after seven o'clock, I hear the roar of his motorcycle as he pulls into the gravel out front. I peek through the palm fronds to see Manex—French on the top (white, gauzy linen collared shirt), Costa Rican on the bottom (shorts and bare feet).

"From that moment on, Manex and I spend nearly every moment together."

From that moment on, Manex and I spend nearly every moment together, and come time to leave, he invites me to extend my ticket and join him and his buddies on a surfing adventure all around Costa Rica. When he finally drops me at the airport two weeks later, he says,"Darlink, I know from when I work in zee restaurant, zee man know exactly what he want. He say, I want zee chocolate cake. Zee wo-man. Zee wo-man, she change her mind. She say I want zee chocolate cake. No, no … actually I want zee ice cream. Ahhh … I sink I want zee pineapple sing. So go home, sink about it, you want, you come back and we make a bebe."

I delight in suppressing my giggles and brush it off as French romance at its finest.

But apparently intentions are no joke. The minute they're declared in earnest, the universal puppeteers begin manipulating the energetic strings of reality to align you with that intention. Back in Venice Beach, sitting in my beautiful bungalow on my beautiful post-modern white couch surrounded by my once important things, all I can think of is the freedom I felt flying through dusty streets on my scooter, cruising over the crest of wave after glassy wave and the peace in my heart I felt in Costa Rica.

I sleep on it. And then I sleep on it again. I sleep on it for a good week. Then I pick up the phone, dial a certain Frenchman and do the one thing that hasn't let me down since—something that scares me a little.

—Written with love from my new home in Costa Rica with a little bebe growing inside me.