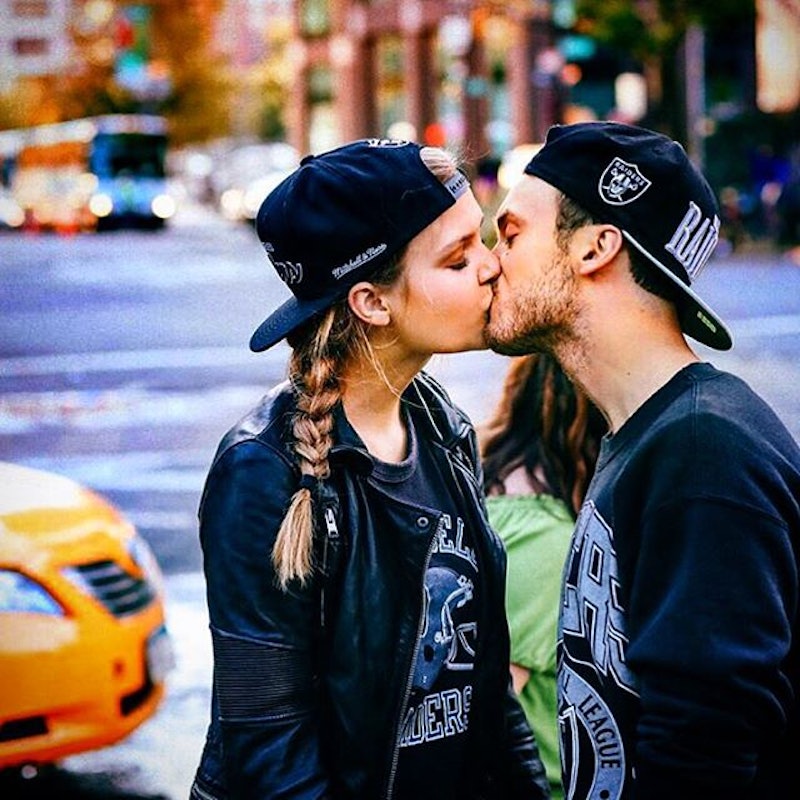 Most articles written these days about modern dating posit that app culture is awesome for men but depressingly disadvantageous for women. We disagree. Sure, most women—and we’re generalizing here—prefer meaningful connections to meaningless hookups, but this doesn’t mean we’re all husband-hunting on Tinder. For some it’s just a diversion, much like Instagram. For others, it’s simply a way of meeting new people. And still others are just looking to break a dating dry spell or add a little excitement into an otherwise boring night. To help you figure out where you should best invest your time, we’ve broken down the increasingly overwhelming app options by goal. Happy (partner) hunting!

You’re bored and want to meet new people, you’ve recently relocated and don’t know anyone in your new town or you’re just looking for some fun (whatever that entails for you). Whatever the case, you don’t want to be bothered with intense profile requirements or vetting processes. Here are the apps for you:

Happn : Happn feels more like a fun game than a dating app. With Happn, you’re only shown users who’ve crossed paths with you on a given day, which is meant, theoretically, to "replicate the serendipity of real life" but seems a smidge stalker-esque to us in practice. Still, the idea of connecting via app with the cutie who just made eyes at you on the train is romantic.

Tinder: Some people meet their soulmates on Tinder, but making marriages is not exactly where Tinder excels. It’s somewhat akin to a frat party: lots of single people ready to mingle with whoever comes on to them the hardest (and lives the closest).

3nder : You could use this threesome-finding app to source a lasting relationship, we suppose, but that’s probably not its best use.

Bumble : Bumble’s point of differentiation—that women make the first move—can be a fun role-reversal of sorts. However, it is basically Tinder with one additional step required before the guy can get to his (potentially disgusting and/or cheesy) pick-up line.

Interested in Real Connections, but Not Dying for a Relationship

You aren’t looking for casual sex—and you don’t want to be bothered by a bunch of trolling suitors who are—but you’re also not into approaching this dating thing like a job search. Here are the apps for you:

Coffee Meets Bagel: Coffee Meets Bagel is sort of a mid-point between Tinder and a more serious app. The profile process is not super in-depth, but they only send you one match per day, which makes the whole thing feel less like you’re shopping for humans amongst a random selection and more like you’re being set up by a friend.

Grouper: This app sets your group of friends up with another group of friends for a no-pressure, see-what-sticks situation. There’s something to the idea of having real-life options—so you can see what sparks without feeling like you’re forced to like a particular person just because you paired with them via algorithm or chance—that feels like it could result in a real connection.

Hinge : Hinge works similarly to Tinder, but uses your Facebook information to vet matches—who are all friends of friends, which eliminates the creep factor to some extent—based on more than just proximity. You also get to see work and education information upfront, which can help you to better contextualize someone before matching with them.

Raya: Most of the people on Raya are already sort of connected, which largely eliminates the likelihood of being matched with a total creep, being ghosted on or any number of other bad behaviors one might find happening on more random apps.

JSwipe : JSwipe has a casual vibe, but it’s definitely less hookup-oriented than some of the other swipe-based apps.

You want a relationship, and while you’re open to various avenues to getting there, you don’t want to waste time just hooking up. Here are the apps for you:

The League : If this app isn’t great for facilitating successful, long-lasting matches based on common experiences, backgrounds and interests, then it’s just great for people who are too snobby to hook up with the masses. We prefer to believe it’s the former.

OkCupid : The OkCupid app at least asks a few questions in advance of trying to set you up with matches, and one of them is specifically about your goals. And since they’ve patented their Compatibility Matching System—which is considered the best in the industry—we're going to go ahead and assume we should trust their judgement better than our own.

Match : While the "Mixer" portion of the Match app functions much like Tinder, the company hasn’t completely abandoned their more complicated, algorithm-based means of connecting people. Plus, there’s a certain stigma attached to having a Match account—that you’re "looking for love"—that doesn’t exist with Tinder-like apps. This can be a good thing in terms of eliminating people who are just trying to find a fling. It also boasts an older crowd, if that’s what you’re into.

eHarmony: Much like OkCupid, the profile process for eHarmony should be enough to deter trolls. In fact, the service was created with marriage in mind, or at least "deep and meaningful love," so the algorithm-based matches presented to you have a better chance of becoming "the one" than they would on more randomized sites.

Plenty of Fish : Sheer numbers are in your favor with POF: it boasts 3M users. The profile process is also lengthy in comparison to other apps and, like OKCupid, requires you to specify your dating goals.

How About We : Although this app is known for being on the more casual side—especially given the release of the new “Tonight” feature—we’re including it in the marriage-material section simply because we don’t know many suitors who would actually take the initiative to dream up a date scenario unless they were looking for something meaningful.