Rebecca van Bergen is changing the supply chain as we know it. 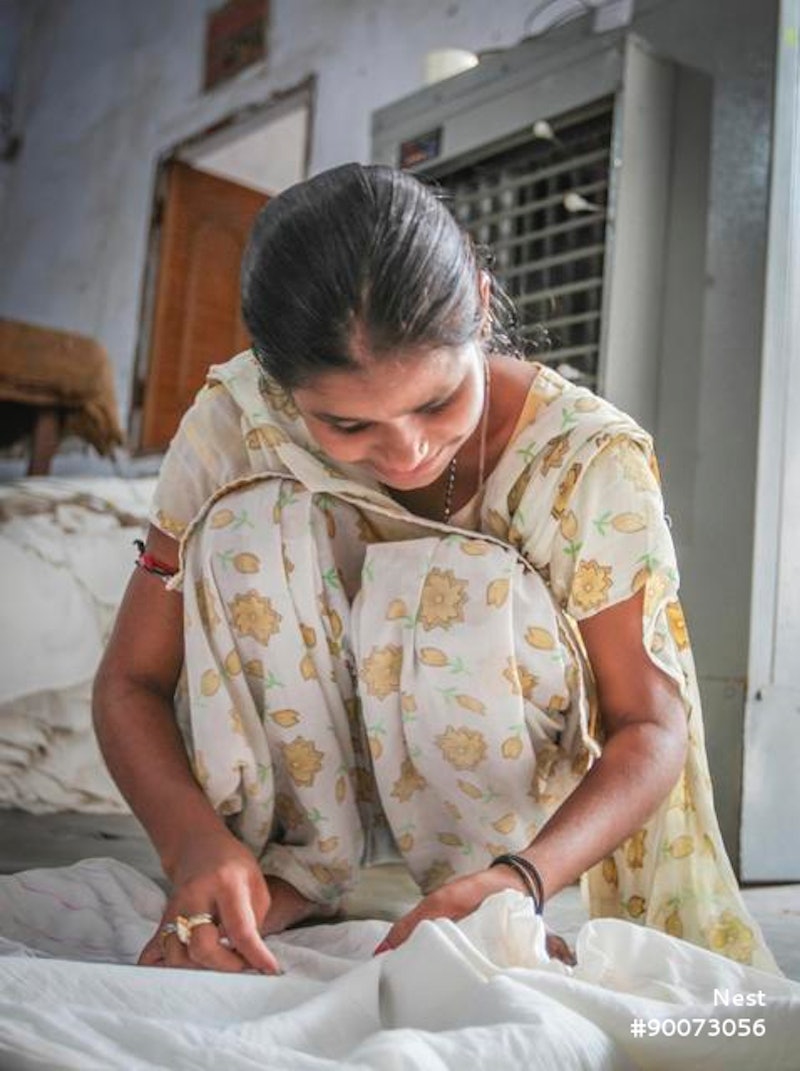 Rebecca van Bergen isn’t one for talking about herself. The founder of nonprofit Nest has been quietly pioneering the artisan rights movement for the past 15 years, yet she rarely utters the word “I” when talking about her success. Instead, her focus remains entirely on her team and the female artisans they champion worldwide.

“There are some 300 million women primarily doing home-based hand work around the world, yet this sector has been cast as niche and non-scalable,” van Bergen said during a recent phone conversation with TZR. “We see this as one of the most significant gender inequities in the world today, and it’s our mission to right that imbalance.”

Nest is a direct manifestation of that goal — the nonprofit has been van Bergen’s fair trade brainchild since 2006. Since then, it has served as the middleman between thousands of home-based artisans and big-name brands interested in ethically sourced, handcrafted goods, including West Elm, Target, Patagonia, Mara Hoffman, Madewell, H&M, and more.

“We want to reframe how the world sees the home working sector and make people understand the importance of these artisans,” adds van Bergen. “This isn’t an ‘invisible workforce’ or a class of ‘ghost workers’ — it’s moms who are contributing to the supply chain from home because they have multiple children and can’t afford childcare.”

Nest’s work really benefits all involved: It helps large brands become more sustainable, provide consumers with handcrafted, ethically sourced products, and give home-based crafters the compensation, recognition, and standards they deserve. Its efforts have slowly created a more circular, human-centric supply chain in the states and beyond.

Of course, van Bergen didn’t get here overnight. While a familial streak for entrepreneurship and philanthropy plus her degree in social work set the stage for her career, her early days traveling and building Nest really alerted her to the startling inequities within the supply chain industry.

“We went to homes where women were making false eyelashes, or putting the pom pom on top of a winter hat, or sewing a sole on a shoe — common things we buy every day,” she explains. “This really opened my eyes to the scale to which underground home working already existed in so many supply chains, yet nobody was talking about it. These women are participating in an economy, but are often not being paid fairly or even recognized for their labor — some companies still still have no home worker policies, and in some countries the laws around home-based labor are less stringent and some do not even require minimum wage requirements met!”

In response, Van Bergen and team quite literally wrote the book on production standards for home-based workers. Their doctrine, titled The Nest Seal, ensures equitable wages, industry-wide transparency, and global workforce inclusivity for both artisans and brands. They also developed a collection of programs designed to connect and train hand workers, develop artisan businesses, and play matchmaker between crafters and designers without unethical middlemen (dubbed the Nest Guild & Connect, Artisan Accelerator, and Nest Sourcing, respectively).

“Consumers are unaware of how much work leaves a factory and gets subcontracted out to a home worker, because you don't have to pay minimum wage,” she explains. “We hope to offer standards and labor protections for home workers, and in turn reduce this exploitation.”

Van Bergen also has a personal connection to the art of crafting, further underscoring her desire to advocate for these female artisans. “I grew up in St. Louis, Missouri, but my grandmother was raised on a tobacco farm in the South,” she shares. “She and my great grandmother were quilters and hand workers; I remember them making my mom’s clothes and warm quilts for the winter. They taught me how to sew at a young age and very much passed down that tradition.”

Unsurprisingly, preserving these familial and cultural traditions worldwide now sits at the heart of Nest’s mission. “We’ve worked in places that have been ravaged by poverty, war, and famine, and craft always remains. People still make things and carry those skills with them, even if they’re fleeing their home countries as refugees,” she shares. “It’s so important to us to help preserve these time-honored cultural traditions by elevating the value of handcraft.”

Of course, part of this preservation relies on technology, or rather the lack thereof. “Some see this focus on handmade goods as antiquated, but to me, it’s no surprise that the handcraft movement has boomed in parallel with technology and automation,” she explains. “The more people have become technologically savvy, the more our souls crave authenticity — companies realize this and want at least some of their collection to be human-made.”

Nest’s work with Madewell is a perfect example of that priority shift. The brand launched a homewares section in 2019, granting customers access to a selection of handcrafted candles, textiles, and ceramics through their Hometown Heroes Collective. “There’s this growing consumer demand for authentic, fair trade products, and so many influential companies are now working with small manufacturing,” she notes. “It’s a relatively new phenomenon, but it’s super exciting.”

When asked what’s next for Nest, van Bergen has a very clear idea of where she’d like to see the supply chain industry in the next three years. “I’d love to live in a world where a ‘no home worker’ policy is akin to having an anti-women policy, because in a way, that’s what it is,” she explains. “I hope in the near future, companies won’t be able to get away with that anymore. You have to embrace different models of work now.”

In a way, the Coronavirus pandemic has only illuminated these double standards across industries and social stratas. “All of a sudden, we all became homeworkers this year,” she deadpans. “So why is that OK for white collar workers, but not for the people producing their goods? Those are the kinds of inequities that we need to start confronting.”