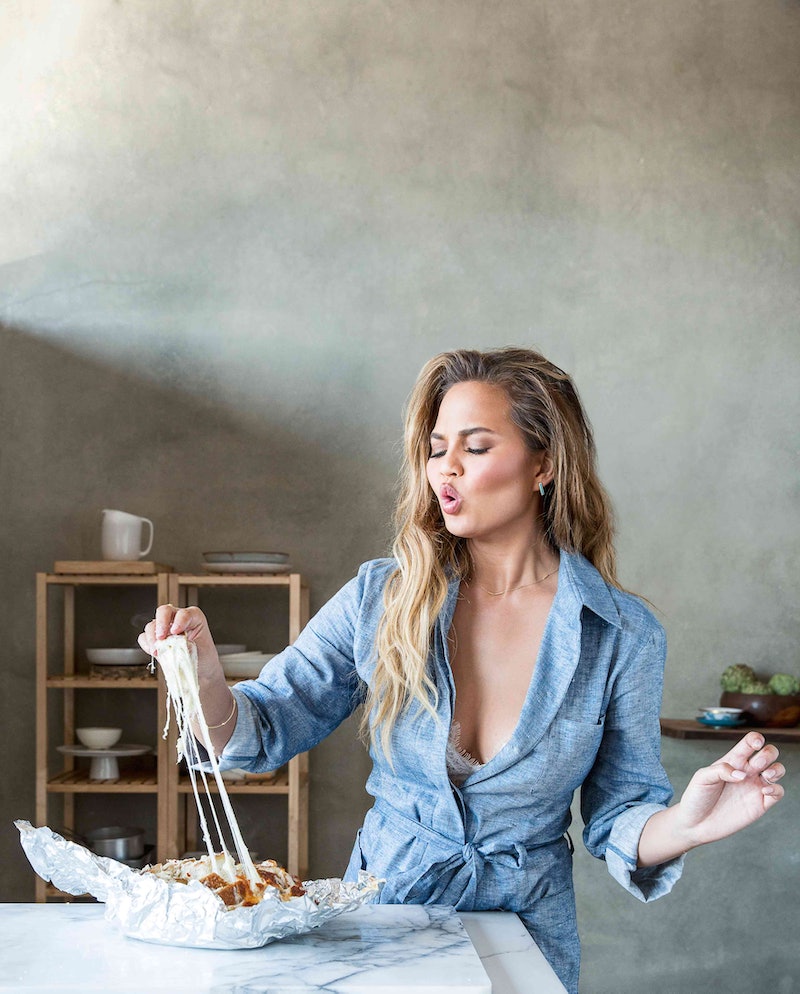 Let me start by saying that I love Chrissy Teigen. She’s hilarious, outspoken, and the kind of “real” woman I can relate to despite the fact that she’s a swimsuit model and her husband is John Legend. That said, there’s something inherently off-putting about a swimsuit model who is constantly talking about how much she likes to eat naughty foods. We get it—you’re effortlessly hot—but could you just do us a favor and rub it in our faces a little less often?

So, when I heard Chrissy was releasing a cookbook full of aforementioned fatty foods (that’s not exactly how it was marketed, but I’m taking a few liberties here), I couldn’t help but roll my eyes a little. “Oh great,” I thought. “A cookbook full of sexy pictures of Chrissy devouring things like hamburgers and mac and cheese,” which is, as it turns out, an exact description of the actual book.

All of that said, I actually love comfort foods like mac and cheese (and, all ribbing aside, I love that Chrissy loves them, too), and I have the cooking skills of a 5-year-old with an Easy Bake Oven, so I thought that trying out a few recipes from Cravings could be a great way to show otherwise dubious suitors that I totally have a domestic side. (Wink.) All things are good in moderation, right?

With that mantra in mind, I decided to pick two of the least healthy-looking recipes—Mac and Cheese, of course, and French Toast Casserole with Salted Frosted Flakes—as well as one Chrissy had touted as her favorite, called Mama Teigen’s Jok Moo.

As I was grocery shopping, something I only do when forced by a Seamless.com outage, my best friend Brooke Peterson happened to call. Now, Brooke is a chef you may know from Private Chefs of Beverly Hills and probably don’t know from a short-lived ABC show called Time Machine Chefs. When I told her what I was up to (and after she stopped laughing at the idea of me cooking anything), she suggested I come over and test out my cravings at her house. I gladly accepted, thinking this meant I could drink wine and hold her baby while she did all the work.

However, that was not to be. Brooke has a 5-year-old daughter who has recently decided her mother is a wolf and therefore cannot sleep for fear her mother will eat her in her sleep. When Brooke said, “I’m not a wolf, sweetie,” her daughter replied (rightly, I might add), “That is exactly what a wolf would say.” This went on for roughly three hours, during which I found myself alone in the kitchen.

Now, I learned to cook from my mom, which is to say that I don’t measure anything, I take as many shortcuts as possible, and I’m usually multitasking through the process. My mom’s excuse for this is that she’s a boss and therefore could only fit so much into her day but refused to let us eat anything she hadn’t herself cooked. My excuse for this is that I have zero domestic interest, am lazy and have fairly severe, untreated adult ADD.

You can imagine, then, how the rest of the night went. For starters, I had to scrap the French Toast Casserole altogether—the dish I was most looking forward to—because it requires you let the dough sit overnight and, since Brooke’s daughter also thought I was a wolf, I thought it might be best if I didn’t outstay my welcome.

The Jok Moo was still doable, however, and was actually a lot easier to make than I had anticipated. Though Brooke, who made a few appearances to ensure I wasn’t burning down her house, was dubious about the length of time I let the rice boil, it turns out that I had the right idea but the wrong amount of water. Jok Moo is basically a pork porridge soup (I used turkey because pork grosses me out), but mine turned out to be more of a super-thick soggy rice mixture that tasted incredibly bland. I’m still not sure what ingredients I left out—I’m assuming there were a few—because my mixture did not taste like anything. It wasn’t bad, it just also wasn’t good. It was the type of thing you might feed someone recovering from a stomach flu, actually, which I’m not sure is a ringing endorsement.

Next up was the mac and cheese. Now, I eat mac and cheese at least once a week, though I prefer the kind that will probably give you diseases and comes in powdered form. My second favorite is my mom’s mac and cheese, which uses so much milk, butter and cheese she’s probably kept several dairy farms in business just by making it a few times annually. I never thought I would see a mac and cheese recipe that called for more cheese than hers, but Chrissy’s does. There’s a part of the recipe that requires you to stir in the cheese bit by bit, and I feel like I was at that portion for a good hour. Then again, being that I don’t like to bother with actually measuring things, there’s some chance I added three times the amount of cheese actually called for in the recipe.

In the end, Chrissy’s Mac and Cheese was a little like the Jok Moo; somehow, despite all that cheese, it still tasted bland. I ate somewhere between six and 15 servings of it regardless, but it didn’t compete with even an Amy’s frozen dinner version of mac and cheese, in my opinion. Brooke, who was finally able to join me around 10:30 p.m. for a tasting, thinks I probably just “f***ed everything up” in the process of making our meal, so I would take this review with a grain of salt (pun definitely intended). There are tons of seriously delicious-sounding recipes in this book and, according to Brooke at least, they’re all fairly easy to execute. If you like Chrissy, you’ll love the book as it’s oozing with her unique brand of humor, and you can always skip past the pictures of her eating burgers in a bathing suit. After this experiment, I feel inspired to write my own cookbook with personal photos and notes included…I just wouldn’t recommend anyone actually try cooking from it.