Watch out for these red flags. 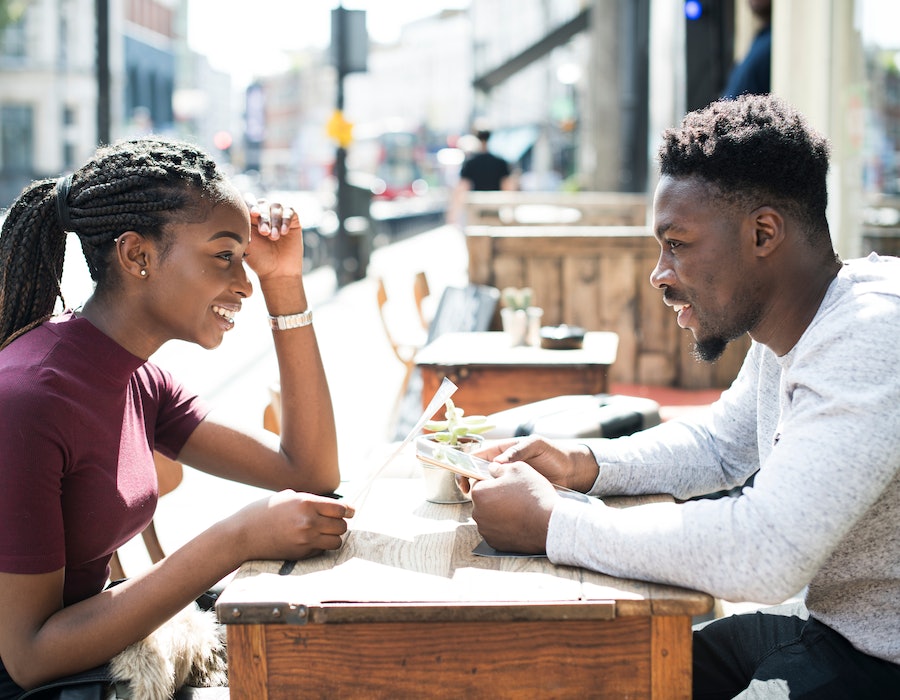 Everyone’s healing process after a breakup is different — but there’s no denying that it’s difficult for most people. That’s especially true when it comes to relationships that have lasted for years; navigating the heartbreak of losing someone you’ve known and loved for so long can be both scary and painful. And when it comes to dating after a long-term relationship? That presents another tricky process in its own right, especially when you’re deciphering whether you’re ready to jump back in the saddle.

Because breakups can run the gamut from mutual and relatively peaceful to devastating and unexpected, it's important to first reflect on where you land on the spectrum. "Dating should be about being present and moving forward," says Tammy Shaklee, founder of LGBTQ matchmaking service H4M. "[Dating after a breakup] depends on how long or serious the relationship was. Was it a seven-year relationship where, at some point, you were basically roommates with no spark and things just slowly fizzled? You will probably be ready [to date] sooner because you’ve been getting ready to meet someone for a while." If your previous situation was filled with "drama or with a sudden, abrupt end, there’s different answers to that," says Shaklee, who explains the latter instance might need more time to heal.

A good barometer could be in picturing and considering certain worse-case scenarios. "If you are on a new date with a new person, drinking a glass of wine and your ex walks in, will there be a scene? Raised voices? Tears? Can you carry on with your night calmly? If the answer is 'no' to these, you're probably not in a good place to date yet," says the relationship guru. The thing is, getting over a breakup and dating again doesn't solely involve your ex. Ahead, three solid signs that you're not quite ready to activate that Bumble account.

Dating After A Long-Term Relationship: You Haven’t Moved On From The Breakup

This was already touched upon before and might seem like an obvious red flag. But, you'd be surprised how many choose not to heed this warning. In fact, some follow the popular adage that you can’t get over someone until you find someone else. According to Shaklee, this is definitely not the way to approach dating after getting out of a long-term relationship.

Simply put: If you’re not over your last relationship and able to put it behind you, you will carry it with you into every situation going forward. You also run the risk of sabotaging those initial dates with a partner that could be an otherwise great match for you. “I always ask clients about their most recent relationship, and I’m gauging if they’ve taken the time to move on,” says the relationship guru. “I’ll find out if they’ve deleted their former partner from social media, have they removed their tags and names from Instagram. There’s small steps you can take to really tell yourself you’re over that last relationship — and, in turn, make room for that other person to come in.”

For Los Angeles-based registered nurse Melody Araya, there was one very specific rule she instated to ensure a steady and clean break from her boyfriend of four years. "I promised myself I wouldn't lose sleep over him," she says. "This sometimes meant turning to medicated solutions to let myself get some rest. But, that was my healing process until I felt like I was OK to get to sleep naturally without him on my mind."

Because Araya's relationship was consistently inconsistent and fraught with unhealthy behavior (including a final breakup by him via text), putting a final fork in the situation was not as difficult as one would think, says Araya. "We broke up in August, and I was mad at him until December," she explains. "We shared a dog and we met up so he could see him. In that conversation and interaction, I realized we had nothing in common and that he's really negative. That's around the time I went back on dating apps."

Dating After A Long-Term Relationship: Your Self-Worth Is Not In A Good Place

Breakups, both mutual and otherwise, can do quite a number on our self-worth and confidence, especially if you've been in a twosome for a long time. This is why, Shaklee emphasizes "me-time" and a little reflection phase. Otherwise, you risk dating again, using poor judgement or self-sabotaging things because you simply don't know who you are as a single person.

Such was somewhat the case for Los Angeles-based freelance writer Allie Flinn, who broke up with her boyfriend of eight years in 2018. Within months, she got back into the game. Looking back a year later, Flinn says this probably wasn't the best idea. "I started dating and didn’t know what I wanted or who I was," she says. "I definitely jumped right into something that wasn’t great for me. I wish I could say I focused on myself and took some time."

After some intense but necessary post-breakup and dating growing pains, lots of journaling, nesting in a new place all her own, and a healthy dose of self-care, some months later, the writer finally found herself in a more confident, self-reflective place. "Dating can be really hard and overwhelming," says Flinn. "I would worry so much about how my date was perceiving me and if they liked me, even if I wasn't that interested. After some time, I learned to think more on whether I liked the person I was on a date with and not worry so much about if they liked me. I realized I had this opportunity to choose the next person I was gonna be with."

Dating After A Long-Term Relationship: Your Motives Are Off

As previously stated, there is no right or wrong timeline to jump back into the dating pool. In fact, if you wanted to start swiping weeks after your breakup, have at it. But first, make sure you check your motives before getting back in the game. Are you seeking validation or a self-esteem boost? Are you seeking distraction from your heartbreak? Be honest with yourself and make sure you’re in a healthy mindset before going on dates.

If not, you might find yourself repeating the same old dating mistakes and making some bad choices in regards to your next partner, which is what Flinn had to learn for herself. With her self-esteem at a low, she found herself seeking distraction and validation in others, which caused her to pick poor potential partners. "I put up with things that I shouldn’t have put up with," she recalls. "Now a year later, I think I have found more inner validation as opposed to seeking it in someone else. I know what I need and what I deserve and I'm learning to create healthy boundaries for myself — I'm always working on it!"

To be clear, dating doesn't need to be a serious, intense experience. It can and should be fun, says Shaklee. However, truly allowing yourself to enjoy the ride and give another person a fair shot requires a healthy approach and motives. So, make sure you keep positivity high and expectations low. "Sometimes we overthink things," says the relationship expert. "Dating is just dating, it's hanging out and getting to know each other. First dates are not an interview for your next relationship — they're an audition for a second date!"

This article was originally published on 9.22.2019