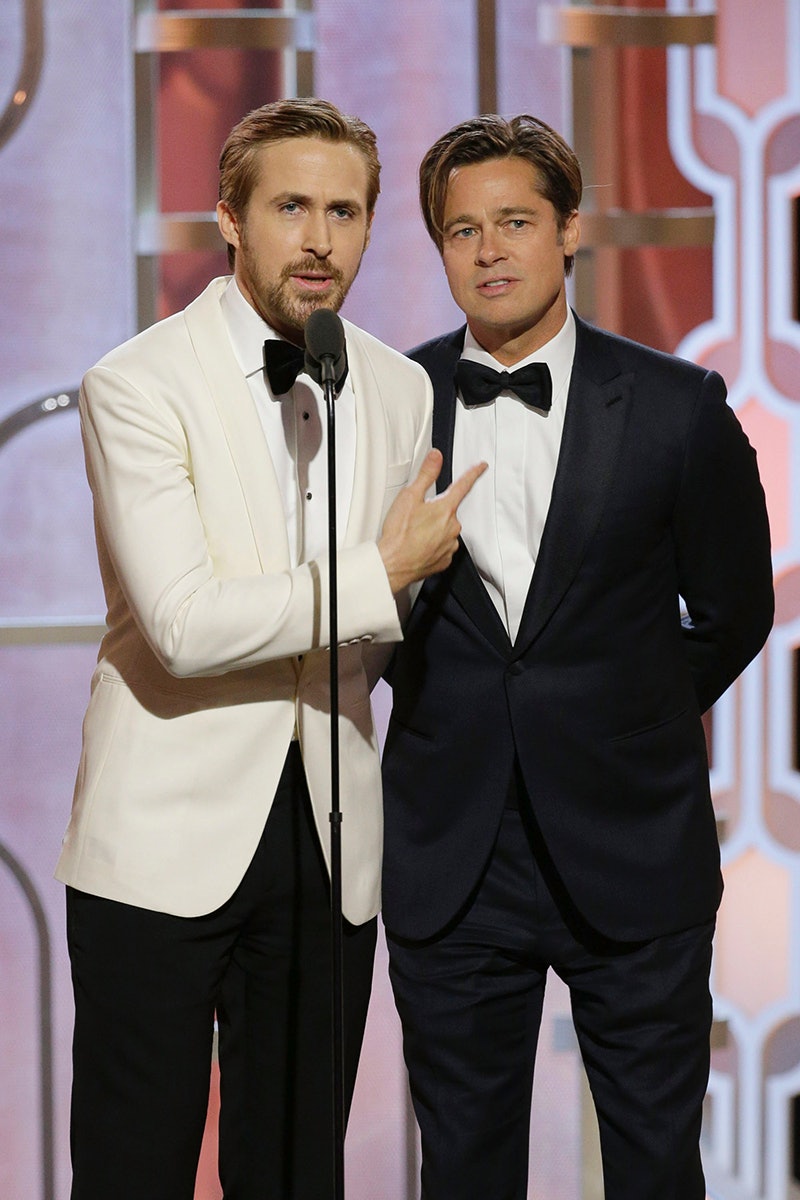 Is it just us, or did everyone seem to be flirting with everyone else at the Globes this year? The Champagne may have been flowing a bit loosely, but we’re not complaining. The free-spirited nature of the event led to some charming (and not-so-charming) moments, the best of which we’ve rounded up here in case you missed them.

Brad Pitt and Ryan Gosling, Together

We've had dreams like this. (Blush!) It doesn't even matter what they said onstage, which is good because we might have blacked out for a minute. Also, did Brad somehow Benjamin Button himself 20 years younger?

Jonah's whole bit, which ended with a weird passive aggressive dig at studio executives, was actually kind of a lowlight; however, train wrecks are always a tad compelling.

Move over, T. Swift and friends...

Jen: "Amy, you just can't give yourself a celeb nickname. It's got to come naturally."

This exchange was pretty awkward, which made for brilliant television. If you're wondering what Ricky said to Mel when the (busy) censors bleeped him out, it was, "What the f--- does sugart--- mean anyway?"—in reference to Mel's now notorious brush with authorities. Yikes.

Denzel Asking His Wife To Help Him Read His Speech

But she didn't have her glasses, either. Celebs … they're just like us!

Taraji won points with us by channeling Cookie onstage with quips like, "Please wrap? I waited 20 years for this, you gonna wait," and to Terrence Howard, "I am nothing without you. Cookie is nothing without Lucious!" Plus, she handed out actual cookies to fellow celebs like Leonardo DiCaprio and Lady Gaga, which brought even more smiles to the lighthearted assembly.

That this speech—which poked fun at how empty and relatively unimportant awards like Golden Globes are—was entirely ad-libbed makes it all that much more impressive and hilarious.

Despite the freaked-out face Leo made when Gaga brushed by him en route to receive her award, the American Horror Story: Hotel star managed to give a beautifully moving and authentically appreciative speech in which she revealed that acting is her true passion.

When Leo Blew A Kiss To Tobey

Leo's relentless campaigning on behalf of The Revenant was made worth it when we got to see him blow a kiss to his bestie Tobey Maguire, who introduced the film onstage. Leo also happened to win the award for Best Actor in a Motion Picture, Drama, to which the Internet rejoiced.

If you haven't yet seen Room, you may not understand how Brie managed to beat out heavy hitters like Cate Blanchett, but trust us, she deserved the win. Plus, her promise to send thank-you notes to everyone she forgot to mention only further endeared us to our newest girl crush.