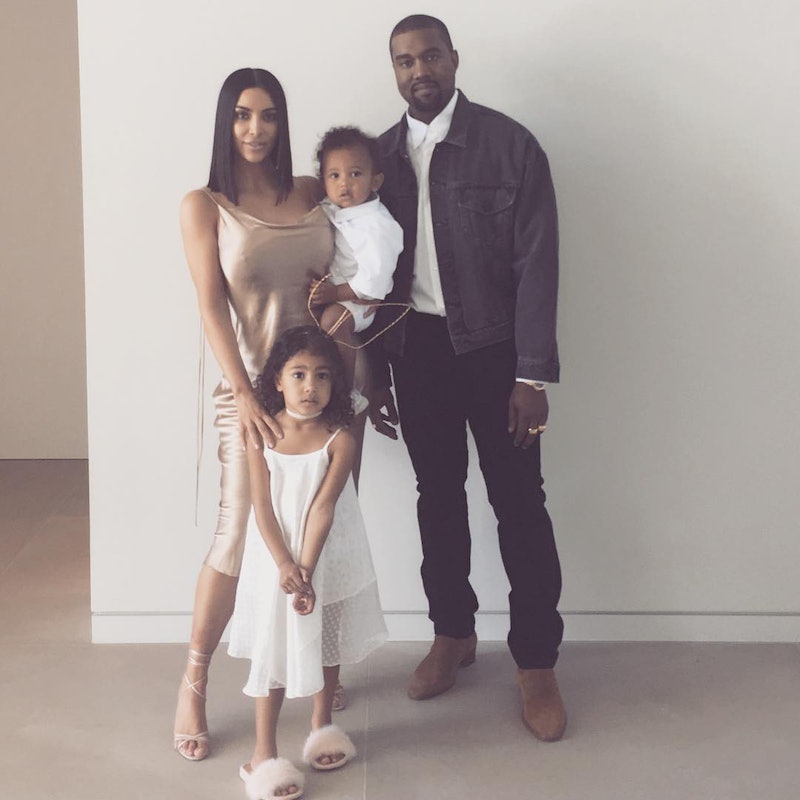 Updated November 15, 2017: After hosting a baby shower where everything from the floral arrangements to the table decor was pink, Kim Kardashian West has finally confirmed she's expecting another girl. However, it seems the major announcement was made by accident when the reality star sat down with Ellen DeGeneres to talk about the aftermath of her cherry-blossom-themed affair.

"So people brought toys and gifts, and [North] was opening them all up the next day," Kim shared on the Ellen show. "She said, 'Mom, since baby sister's not here, I think I need all of her toys in my room, and I'll play with them and just make sure they're all okay for baby sister.'"

Although she let baby number three's sex slip, Kim admitted she and husband Kanye West have yet to decide on a name. (Maybe Star, big sis North's moniker for her toy llama?) "At the baby shower, I was like ... 'I just want everyone to write a name on a little tile and see if there is something that sticks,'" she said. "We're freaking out—we have no name."

Looks like they'll have to settle on one within the next month when we're expecting the newest family addition to the Kardashian Wests!

Updated October 26, 2017: With all the talk of two other Kardashian-Jenner pregnancies, you might have forgotten that Kim Kardashian herself is also expecting a baby. Over the summer, we heard she and Kanye West were going through the last leg of home renovations before welcoming their third child via surrogate in January, but now it's looking like the couple will have to prepare much sooner than planned. According to Us Weekly, an insider placed the delivery date just before Christmas. That's less than two months for Kim and Kanye to move into their newly refurbished Hidden Hills, California, mansion, which will be home to the soon-to-be family of five. Congrats to the Kardashian Wests!

Updated July 26, 2017: We have a major update on Kim Kardashian and Kanye West's plans for baby number three: They're officially expecting. And as doctors have previously warned that another pregnancy would be a health risk for Kim, it's the couple's surrogate, a San Diego mother in her late 20s, who is reportedly three months along. The Wests will likely welcome the newest addition to their family in January.

Hired through an unnamed agency, the surrogate has appeared with her own family in a promo video about the process and is contracted to follow certain stipulations such as no drinking, smoking or using drugs as well as other dietary restrictions.

We're happy to hear that Kim's expanding her family and can't wait to see North and Saint step into their roles of older siblings to the new addition.

Original post June 21, 2017: It's no longer news to us that Kim Kardashian West wants a third baby. Through TV interviews and episodes of Keeping Up with the Kardashians, the reality star has been been vocal about her desire to expand her brood with Kanye West, but it's not as simple as it sounds.

A few months ago, doctors warned Kim of the risk of getting pregnant another time after she suffered from pre-eclampsia with North, faced the possibility of diabetes with Saint and experienced placenta accreta during both pregnancies. She's since been considering surrogacy, and while momager Kris Jenner has previously offered to act as one, it looks like Kim and Ye have reportedly been able to find a surrogate through an agency.

While this is good news for the couple, the process isn't exactly pocket change. (Or perhaps it is, considering she's a Kardashian.) On top of a $68,850 deposit, it's been reported that Kimye will pay a total of $45,000 in ten installments, and the surrogate will receive $5,000 for each additional child should there be more than one. Considering it's basically the Year of Twins, this is definitely a possibility.

It couldn't have been easy for the two to arrive at this decision, but we're glad things are looking up for Kim. After all, it's been a tough past year for her, and we can only hope that this experience will bring the new bundle of joy she and her family very clearly want.