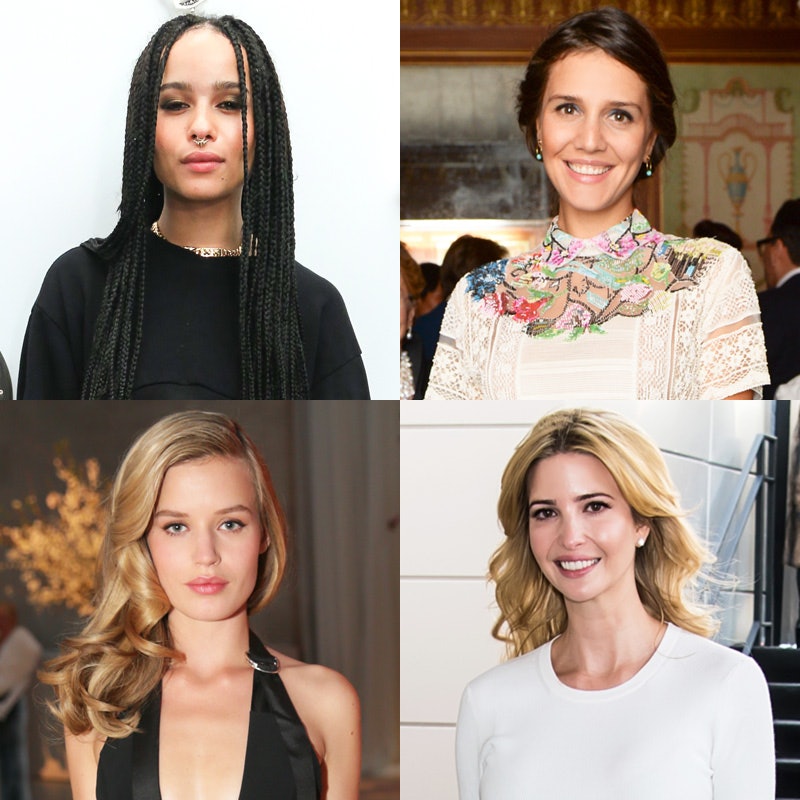 Children of famous parents could easily rest on their laurels and last names, scoffing at the idea of serious careers or long work days. Not these ladies! Whether they chose to follow their parentals into the family business or to pursue a different passion altogether, these women are carving their own impressive paths to success. Get inspired by these go-getters—who happen to also be incredibly chic and impossibly cool. Good genes, indeed.

Raised in Italy surrounded by the family business, Margherita Missoni could easily have fallen into fashion from an early age. Instead, she earned a philosophy degree at Columbia University in New York City and pursued her interest in the theater. After returning to Milan full time, she joined the Missoni design team and just launched the luxury label's first children’s line.

This daughter of rock royalty has a successful acting career, having appeared in the Divergent movie series and X-Men, as well as the television series Californication, to name just a few of her projects. She is also a muse to Alexander Wang and a burgeoning musician. Her latest musical venture, the band Lolawolf, released an album in 2013 and will perform at this year’s South by South West music festival in Austin, TX.

The unassuming blonde burst onto the fashion scene as one of her half-sister’s bridesmaids. Blessed with the same preternatural beauty as Kate, Lottie was quickly signed by London modeling agency Storm and has already scored countless fashion editorials and a Calvin Klein campaign (the same label that launched her sister into the spotlight). Yesterday, she made her runway debut at Sonia Rykiel’s Fall 2015 fashion show. We're not sure anything can compare to sharing genes with Kate the Great.

Julia was launched into the modeling world when she was chosen as the face of Tom Ford’s Black Orchid fragrance in 2006. After graduating from Parsons School of Design, she segued into art direction, consulting for prestigious labels such as Miu Miu. Following the birth of her daughter, she launched a successful lifestyle blog for hip mothers called Romy and the Bunnies.

Ready to feel like an underachiever? This 33-year-old graduated from The University of Pennsylvania before becoming the Executive Vice President of Development and Acquisitions at The Trump Organization, focusing on acquisitions and design. She also helms Ivanka Trump Fine Jewelry and The Ivanka Trump Lifestyle Collection of accessories, outerwear and eyewear.

The 27-year-old daughter of the most powerful woman in fashion started out as a contributing editor for Teen Vogue at the age of 17. After graduating from Columbia University she decided to pursue a career in film and television and currently works as a producer for Late Night With Seth Meyers.

Being the daughter of arguably the most famous rock star of our time and '70s supermodel Jerry Hall means Georgia May Jagger was dealt an extraordinarily good hand in the DNA department. At just 23 years old she has already dominated the international fashion scene, scoring campaigns for brands including Rimmel London and Mulberry. She also continues to grace major catwalk after major catwalk during Fashion Month. To top it off, she runs with the elite of London’s cool crowd, including fellow It girls Cara Delevingne and Suki Waterhouse.

The actress started performing at the Youth Academy for Dramatic Arts as a child before studying broadcast journalism at the University of Southern California. After working as a contributing editor for a number of publications (including Teen Vogue and British Elle Girl) Lily hosted Nickelodeon shows and costarred in the Oscar-nominated film The Blind Side alongside Sandra Bullock. Later, she landed the lead role of Snow White in the 2012 hit Mirror Mirror. Today she is considered one of Hollywood's most promising on-the-rise starlets.

The beloved designer was born in Cape Town to a Brazilian model mother and property-developer father (whose father was a billionaire tycoon). Along with her siblings (including model Alice Dellal), Charlotte grew up bouncing between London, Paris and Rio de Janiero before attending London College of Fashion. She launched her eponymous shoe line in 2008 and has since won many accolades, including Glamour Accessories Designer of the Year and Footwear News Designer of the Year in 2012.