Exhibit A: These iconic women. 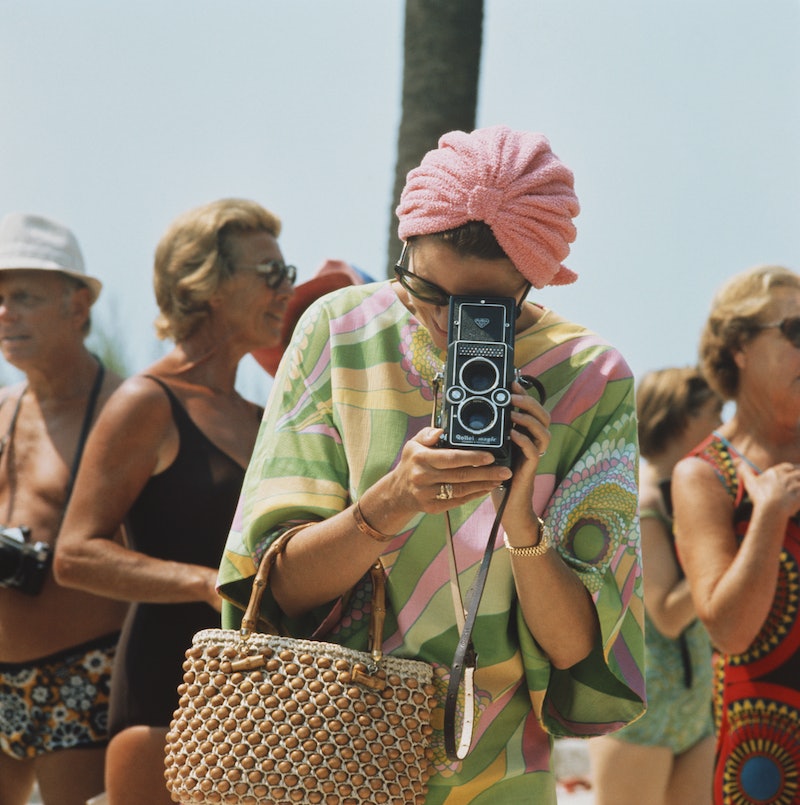 Here's a bit of an understatement: society has a tendency toward glorifying youth. Sure, being young does have its perks (fewer achy bones, more collagen), but growing older can't be beat, especially as it pertains to honing your fashion taste. The mature summer vacation style of women in their 50s, 60s, and beyond is the byproduct of women who have lived long enough to have perfected the art of slowing down. If you wander the sun-drenched streets of some of the world's best resort towns — Capri, Cannes, San Sebastián — it's often the nonnas whose impeccable style you're clocking.

And when it comes to famous women in fashion, despite the dozens of story roundups of archival shots of icons like Jane Birkin and Brigitte Bardot in their twenties, there are the lesser-known snaps of these types of style giants that are equally as inspiring. Though many of these names were photographed primarily in their youth, with a little bit of digging around you can still find some fantastic pictures of women like Josephine Baker and Jackie Kennedy in their golden years doing the most golden thing of all: vacationing. Ahead, discover seven unique, imitable looks to infuse your summer vacation style with and shop whatever might be missing in your suitcase.

Swedish-American actress Greta Garbo was a star during Hollywood's so-called 'Golden Age' and is photographed here on vacation in Hydra, Greece at the age of 61. Her crisp white-on-white look is punctuated by a straw hat and her signature bold sunglasses. This is the kind of outfit that's easy to replicate and always makes a strong statement.

Grace Kelly may have retired from acting at the ripe age of 26, but her personal style continued to bloom long after. Here, the Princess of Monaco is at the beach in Monte Carlo in her mid-forties and illustrating the fact that bold prints are king when it comes to summer vacation style. Accessorize with a hairpiece and woven bag to complete the look and don't forget the camera!

Josephine Baker will forever be synonymous with the Harlem Renaissance and Paris in the 1920s, but the iconic entertainer lived to be almost 70. Here, at age 58, she is shown on the beach in France with her children wearing a sleek black swimsuit accessorized with a beaded necklace and fishnets — iconic.

In the realm of style icons, Jackie O will forever top the lists. Her confident, pared-back taste in fashion is enduringly appealing and this Martha's Vineyard vacation look is no exception. Wearing her signature Quaker Marine Supply Co. cap and a handful of bright accessories, she's understated cool to the max. Bring on the lobster rolls.

If you're a devoted viewer of The Crown then you're well-acquainted with who socialite Wallis Simpson is. The Duchess of Windsor was seemingly perpetually surrounded by controversy, but her sense of style was equal parts elegant and expressive. Here, she's shown in her mid-fifties with The Duke in Portofino and their dog.

There's no one quite like Elizabeth Taylor when it comes to fashion. Her unbridled extravagance and confidence are things to be admired and, in the case of this summery look snapped in Israel in 1975 during her mid-forties, something to be replicated in your own wardrobe. Combine a bohemian blouse with flare or bootcut denim and add in wooden jewelry.

Not all vacation looks demand a swimsuit or elaborate kaftan, rather, a relaxed ensemble of breathable separates to wear while plucking lemons from the tree à la Eartha Kitt, age 55, sounds just as enticing. The American singer, dancer, activist, and actress well-known for her role as Catwoman will forever be a go-to when it comes to style inspiration.