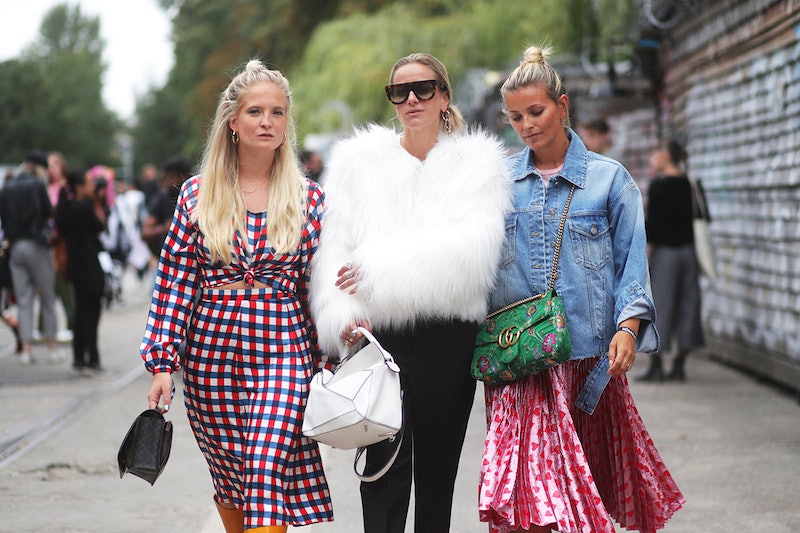 If you follow any of the Scandinavian It girls on Instagram, you’ve likely spotted them gallivanting around the world as a fashionable squad, often decked in the hottest designers from head to toe. Not only do these women speak multiple languages and have huge social media followings, they also know how to challenge fashion rules and make their everyday lives an incredible runway. Here, a few lessons to be learned from Scandinavia’s chicest crew.

Your Purse Says A Lot About Your Personality

If there’s one thing these girls know, it’s the power of a good purse. Whether a printed Gucci, a Cult Gaia classic or any other number of this season’s hottest carryalls, this chic crew makes sure there is no outfit left unaccessorized. Their purses often serve as the pièce de résistance, adding a fabulous final note to their perfectly appointed looks. These statement-making choices also show self-confidence and a true mastery of their own unique style.

Who among us doesn’t love a large pair of sunglasses to cover up tired eyes or other evidence of a long night? The Scandi girls kick this philosophy up a notch with nearly face-swallowing styles that are both chic and imposing. The best part of their signature style: With sunglasses this big, no need for makeup. Our morning routine just got way faster.

Sporty Accents Can Be Super Chic

It’s not easy to go from top designers to sportswear and make each look high end, but somehow these girls have mastered that task. A simple hoodie or sporty sweatshirt turns über-cool in this crew’s incredibly fashionable and capable hands. Paired with dressy pants and heels, teamed with denim and a designer bag, or boldly worn as a full ensemble, athleisure pieces take on an entirely new meaning when the Scandinavian fashion girls don them. It makes us want to go find a hoodie ASAP.

Color Is Your Friend

If there is one thing the Scandis are not afraid of, it's color—wearing it, pairing it and mixing it with wild abandon. They embrace primary colors, prints of all kinds and stripes upon stripes. No matter what the season, they make sure their look celebrates every shade of the rainbow, and they do it without looking like they’re in costume. It’s a fashion lesson to be studied and emulated.

Great Friends Are The Best Fashion Statement You Can Make

Fabulous clothes, It bags and top designers are all well and good, but there is no better accessory than a truly solid girl squad. These girls travel together and support each other, and sometimes it seems they even dress in tandem. Their constant camaraderie is the coolest—and chicest—thing about them.