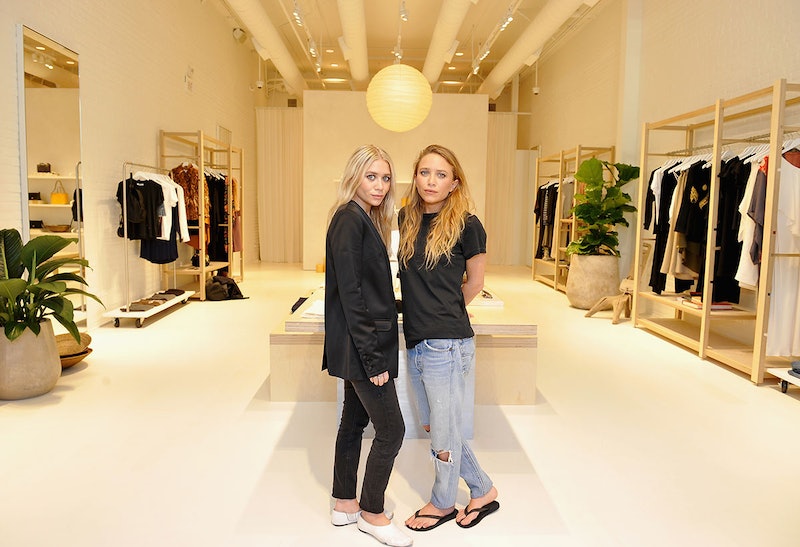 The mounting evidence is hard to ignore: Los Angeles is solidifying its post as a legitimate, burgeoning fashion hub. An increasing number of skeptics and die-hard New Yorkers seem to be changing their tune, warming up to the West Coast and the tempting California sun.

What began in large part with former Saint Laurent Creative Director Hedi Slimane moving his design studio to LA in 2012 has resulted in a ripple effect among huge luxury brands and contemporary labels alike. The latter is the topic at hand—the migration and cultivation of an elevated yet attainable fashion scene right here in the City of Angels. This shift reflects the industry's evolution as a whole—nimbly acclimating to a changing fashion calendar and model—and the overwhelming influence of the Internet. As a result, momentum continues to build in the city's favor.

Ashley and Mary-Kate Olsen in their new Elizabeth and James store at The Grove in LA. Photo: Courtesy

This movement can be attributed in part to the ever-evolving spectacle that is fashion week. What once dictated the timing and discourse of an entire season has now been flipped on its head.

"Fashion week is no longer the monolith it once was," says womenswear designer Rachel Comey, who just opened her first LA outpost in West Hollywood's celebrated Melrose Place corridor. "For the first time, designers have the freedom and ability to show their collections in ways and places that they never have. LA is so architecturally rich and inspirational, it's an obvious alternative."

Many designers, like Comey herself, are opting to eschew the traditional fashion-show experience in favor of intimate presentations and dinners that feel more intentional and aligned with their seasonal strategies.

What's more, esteemed production company Made expanded its New York fashion series to LA this past June, with Moschino, Hood by Air and Golf Wang (Tyler the Creator’s clothing line) among others presenting collections. While LA Fashion Week has previously struggled to measure up to its New York counterpart, the Made franchise's presence in the city represents a significant milestone of industry cred.

Calendar shake-ups aside, designers are identifying more with the aesthetic of the city, as the notion of laid-back luxury continues to be de rigueur.

"I think the sportswear influence is really important right now, and no one does it better than the LA scene—it's always been part of their way of life," says French designer Vanessa Seward, whose first LA store also just opened on Melrose Place.

While the locale certainly has a knack for the easygoing, the vibe has progressed to a more mature, elevated status—"less about activewear and more about relaxed tailoring and higher-end pieces styled in a casual way," according to designer Deborah Sams of Australian label Bassike, whose first and only US outpost recently landed in Venice.

This industry shift toward luxe-casual is reflected in the rise of athleisure, the influence of Demna Gvasalia's progressive yet pragmatic work for Vetements (“A garment is a product. It’s not made to be in a museum. It's meant to be in somebody's wardrobe," he has said) and even the term "loose luxury," which was coined by emerging label Baja East to describe its own high-quality, low-fuss ethos. As such, there’s never been a better time, or more appropriate place, for this concept to flourish.

Los Angeles serves designers well, too. The quality of life is a big draw, and on the creative front specifically, these visionaries are thriving.

"[The city] is a constant source of inspiration and is known for its effortless style and space," notes Ben Taverniti, who helms Unravel, the streetwear-inspired luxury label favored by all manner of Kardashians, Jenners and Hadids. "I think more designers are starting here because of the laid-back attitude, which allows you to think freely and be creative."

LA-based knitwear maven Raquel Allegra agrees: “[It's] an immense, culturally rich city bursting with creativity. There are so many fascinating subcultures to pull inspiration from. Its [modern] history is rooted in the entertainment industry, allowing for a sense of fantasy and storytelling.”

Even elusive fashion-industry darlings are smitten with the city—Ashley and Mary-Kate Olsen opted to open their first brick-and-mortar Elizabeth and James store at The Grove shopping center, with Ashley citing it as "an LA institution." The duo previously opened their first The Row store in the city back in 2014.

Finally, there is strength in numbers—as the LA fashion community grows, an increased sense of camaraderie only boosts its appeal. "I love the strong sense of community here among designers," says Shaina Mote, who runs her eponymous minimalist-chic label out of the city. "There are so many inspiring and strong women-run businesses coming from LA."

In many ways, Los Angeles continues to shed the stigma that there is no industry in its midst. And while New York will always be at the core of the fashion world, LA is making its own mark on the robust landscape. As our editor at large said so eloquently, "LA will never be New York, but it's looking more and more like it isn't trying to be." Instead, it's carving out a space all its own.