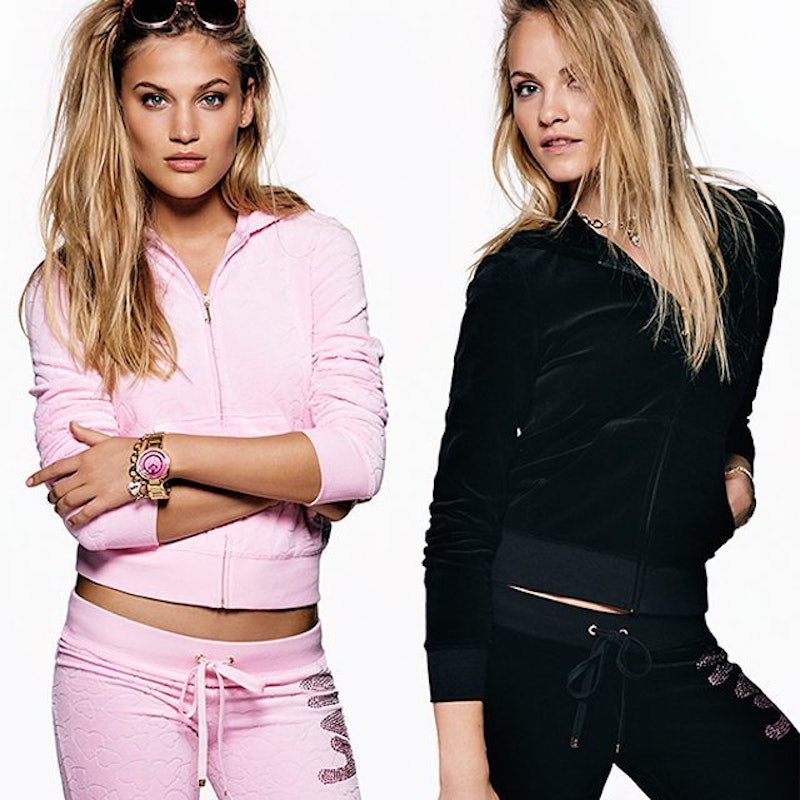 I should’ve been used to not owning the trendy piece of clothing “everyone else” was wearing, as my mom was vehemently opposed to such things and rarely caved to indulging me. I begged for a pair of Guess jeans in the fifth grade for months and months to no avail, which is probably why their recent resurgence has me compulsively purchasing nostalgic products I was never allowed to own back in the nineties. By the time Juicy jumpsuits rolled around, however, I was a newly minted college student who should have been able to wear whatever I wanted with or without my mom’s permission. The problem was that I was also working my way through school, and my Islands waitressing income did not quite afford me the $200 velour two-piece of my dreams. So, I resorted back to begging my mom in a sad display of juvenile regression paralleled only by the time I moved back in with my parents as a fully-fledged adult. She eventually relented, mostly because she thought it would buy my desire to call her more often, and I was awarded a Pepto Bismol-pink Juicy tracksuit for Christmas of, I think, 2004.

I wore that tracksuit a lot, even though I was maybe 20 or 30 pounds overweight due to an overindulgence in beer and late night Del Taco. It was not a good look but I loved it, and there are many, many pictures of me from that time looking like a blob of cotton candy that now make me intensely happy… that Instagram had not yet been invented. I retired it only after a good—if brutally honest—friend intervened, the same friend who had earlier forced me onto Acutane and stopped me from wearing shorts to clubs. She herself owned Juicy tracksuits in a variety of hues, but I guess for some reason I just couldn’t pull off the look. That, or she was just jealous of how radiant I looked in my hard-won bubblegum velour ensemble.

Today, I found out that Juicy tracksuits are making a comeback, which potentially proves my recent prediction that our attention span-deficient society has breezed past nineties nostalgia and moved on to resuscitation of the trends of the early aughts. Seeing this trend recycle makes me feel a bit dated, and it’s forcing me to realize that I’m a now a boring adult reduced to shaking her head at the teenagers repurposing the trends of her youth. (Sadface/grandma emoji.) That said, once I see the suit on Gigi, I have a feeling that my desire for the status symbol of my youth will rekindle. If and when it does, I think I’ll opt for the new hue “whisper pink”… for old time’s sake.