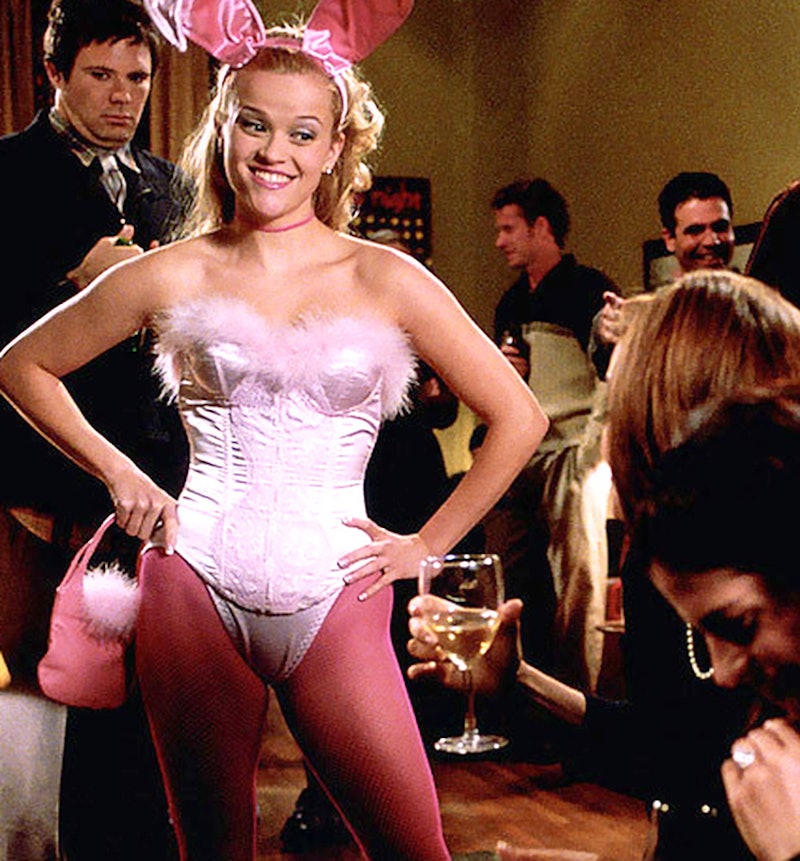 I'm not the Ebenezer Scrooge of Halloween, but as soon as costume ideas start hitting my social media feed, my resting bitch face morphs into extremely active bitch face. While I can appreciate those who design creative costumes (despite hating the process of finding one myself), it's the women who use the holiday as an excuse to wear lingerie in lieu of seasonally-appropriate amounts of clothing like, say, an overcoat, who drive me crazy. Here's why.

I Hate Dressing Up

I never got into dressing up whether it was for Halloween or my very, very short-lived time as a sorority girl attending theme parties. For one, it takes so much effort and planning. What are you going to go as? How will you acquire said costume? I don't sew. No one I know sews. That being said, I do not want to spend a ton of money on a costume that I will wear once. I have had to attend lots of Halloween functions for work (believe it or not) so my go-to is an all black ensemble with a cat ear headband and eyeliner emblazoned nose and whiskers. Lame, I know.

Despite the lameness of said costume, I am always one of the most overdressed girls at these parties because I'm actually wearing clothes. A horrifying amount of women are often wearing next to nothing, treating ensembles I would be hesitant to wear in the bedroom as acceptable attire for public consumption.

Aren't We Better Than This?

I'm gonna let Tina Fey's screenwriting in Mean Girls take the wheel and state my thesis because Liz Lemon's alter ego eloquently wrote it better than I ever could. "In the regular world, Halloween is when children dress up in costumes and beg for candy. In girl world, Halloween is the one night a year when a girl can dress like a total slut and no other girls can say anything about it."

I went to a popular costume website geared towards adults and here are a few of their styles: Sinfully Hot Nun, Shore Thing Sailor, General Perversion Jacket (a tribute to those who graciously serve our country), Native Hottie, S&M Maleficent Dress, Tribal Vixen and Sexy Cat Burglar. I could go on. (No really I could, they have 20 pages of costumes.) If we are going to run the gamut of professions with these ridiculous costumes could we at least get "Racy Rhodes Scholar" or "Steamy Newly Appointed Supreme Court Justice"?

Embrace Who You Are

I want to be very clear, I am not slut shaming. I am a very sex positive person and love when women embrace their sexuality. I also have no problem with women who enjoy dressing provocatively. If you feel comfortable in your own skin enough to show most of it off, I say go for it. What I do have a problem with is girls using Halloween as an excuse to break out a corset and panties, grab a top hat and call herself a Sexy Ringmaster as she Ubers from one side of town to the next. Let's be real, we all know this girl likely hasn't had a secret desire to pretend to be a ringmaster since she was a child. (In fact, she probably protested the use of elephants in the circus). More likely she just wanted some guise of a costume so no one would call her out for wearing her lingerie in public. If you want to wear next to nothing, do it all year! Be who you are. You don't need Halloween to wear what you want.