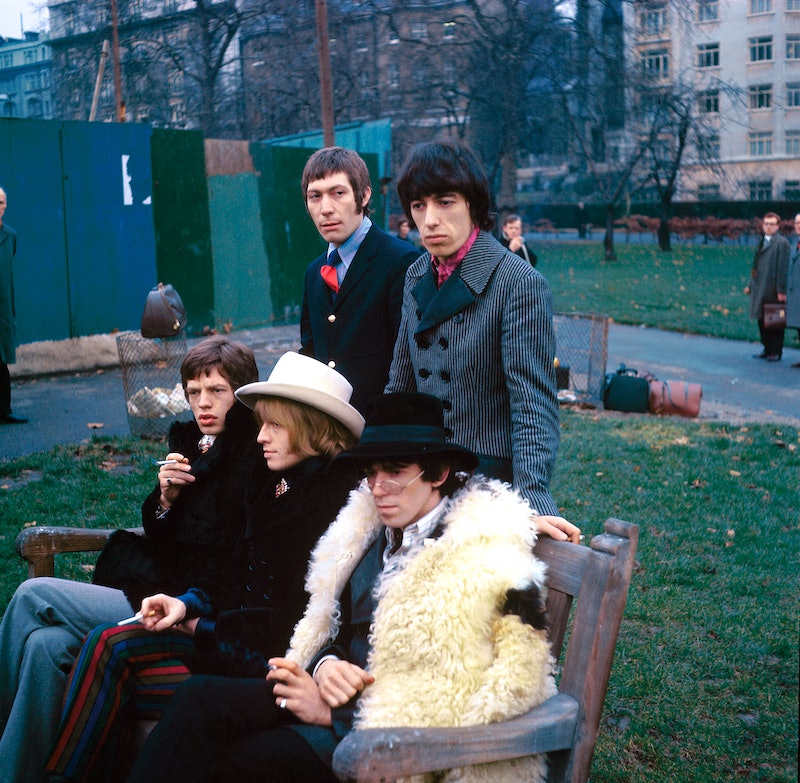 When The Rolling Stones announced their upcoming North American tour, two things came to mind: One, we must get tickets ASAP (on sale April 13th) and two, what will the fabulous foursome wear onstage? Forever inspired by the iconic rock stars’ signature style throughout the decades, we take a look back on their sartorial evolution and share what we hope to see them in while rocking out across the country later this year.

1964: The Group Releases Their Debut Album

1965: The Group Records Their First International Number 1 Single, "(I Can't Get No) Satisfaction"

Still in their two-piece suits, Brian, Charlie, Mick, Keith and Bill are seen with a more cohesive group look and slightly shaggier hair.

As the group continues to blow up, the boys begin to individually express a sense of personal style by incorporating color, texture and accessories into their looks.

1971: "Sticky Fingers" Is Released, The Group Embarks On Their Farewell Tour Of Great Britain

Notorious for their musical synergy, Keith and Mick (affectionately referred to as The Glimmer Twins) flaunted their dynamic partnership, often complementing one another onstage with theatrical getups. Partial to velvet, sequins and crop tops, nothing was too flamboyant for these two.

1982: The Band Celebrates Their 20th Anniversary

1997: The Band Travels The World On "Bridges to Babylon" Tour

Cool outerwear is the name of the game—Ronnie, Keith and Mick were partial to longline blazers and jackets (plus cool sunnies) for onstage garb, seen here in Chicago, IL.

Decades later and still jamming just as hard as the day they started—the guys keep their cool rocker style intact with leather jackets and vests, embellished blazers and skinny pants.

To switch up his signature Rasta-inspired head scarf, we'd love to see Keith sport a two-toned fedora teamed with a leopard-print blazer.

What We Hope Ronnie Will Wear In 2015

A true rocker through and through, Ronnie's onstage ethos is a perfect match for a badass Balenciaga leather jacket and moto-detail skinny jeans.

What We Hope Charlie Will Wear In 2015

As Charlie generally sticks to solid-colored tees while drumming, we'd love to see him switch up his look in favor of a cool, graphic-printed version of his go-to.