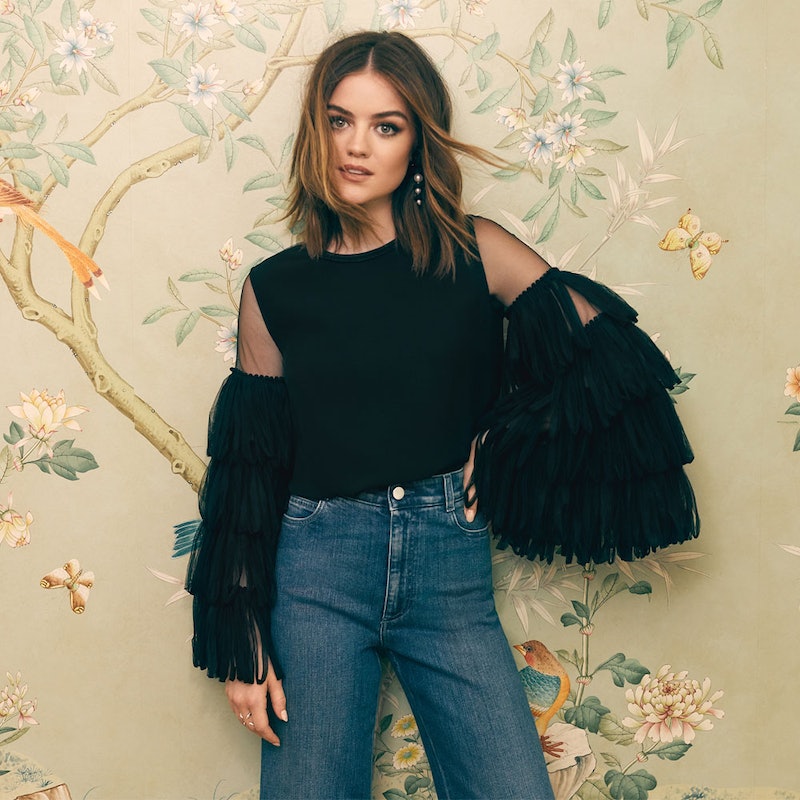 Endless crowds, breaking budgets and empty chatter with the person in line ahead of you—holiday shopping can easily become a not-so-wonderful task in the otherwise most wonderful time of the year. But there’s an advantage to navigating the busy streets, and that’s the chance to view some of the season’s loveliest pieces—perfect for gifting friends, family and, of course, yourself. From Tory Burch’s elegant edits to Net-A-Porter x Mr. Porter’s signature items, these shops are guaranteed to make the experience a little bit easier (especially on the eyes). Here, a compilation of the top holiday campaigns just in time for gifting season.

Inspired by designer Alessandro Michele's 2017 Cruise collections, Gucci's displays fuse Gothic impressions with London pop culture that bring the clothing and accessories in each window to center stage. They're also color-coded (for instance, pink for women's, light blue for men's and green for unisex), making it easier for you to match the item to the person on your gift list.

OK, we know this one's online, but for its second partnership, Net-a-Porter and Mr. Porter introduced "Gifts All Wrapped Up," a campaign complete with an animated short film that gives the viewer an idea of how the luxury e-tailers produce their his-and-hers holiday gifts. As always, these never disappoint; from cashmere sets to limited-edition beauty kits, these are fitting for that special someone.

A clever play on the designer's name, the "Tory Story" campaign video stars model Jessica Hart, who lip-syncs to the hit song "Don't Mind" while unwrapping presents in her New York City apartment. We see printed dresses and vibrant swimwear from Tory Burch's Holiday 2016 and Resort 2017 collections, which brings island living to mind—just right for the freer spirits in your life.

Get ready: Your favorite celebrities are coming together to teach you how to holiday (yes, it CAN be a verb). Lucy Hale, Kate Bosworth and other notables will host weekly features for Shopbop's new #HolidayHowTo campaign, with how-to's on getting dressed and staying fit using the brand's existing gift guide. It's just the inspiration you need to find the most suitable gifts for the trickiest names on your list.

In today's divisive political climate, Barneys New York wants to do us all a favor. The luxury retailer is spreading much-needed holiday cheer through its "Love Peace Joy Project," a partnership with celebrated artists like Nick Cave, Rob Pruitt, Ebony G. Patterson and collective Studio Job through window installations that reveal each artist's unique talent as well as Barneys' sense of wit and surprise. Also fitting for charity-minded loved ones, Barneys is raising awareness and making donations to Amy Schumer's STYLEFUND and Russell Westbrook's Why Not? Foundation.

In true Wes Anderson fashion, H&M enlisted the director for its holiday commercial, creating a four-minute masterpiece that recalls scenes from The Darjeeling Limited and The Grand Budapest Hotel. Starring Adrien Brody, "Come Together" tells the story of a conductor who throws a Christmas party for his passengers when a blizzard puts a dent in their holiday plans. The retail giant also features signature knitwear that are just the kind you need to get cozy for the rest of the season.

Kate Spade New York's "Miss Adventure" film series is about celebrating one-of-a-kind personalities—an excellent fit for the independent and creative women in your life. In its latest installment, the show features actress Zosia Mamet, Man Repeller founder Leandra Medine and legendary diva Miss Piggy herself, as the former and latter run into the major wardrobe malfunction of wearing the same outfit. (Fingers crossed this doesn't happen to you at any of your holiday parties.)

Christian Louboutin's "The Shoemaker and The Stars"

A whimsical fairytale, "The Shoemaker and The Stars" tells the story of a man set on creating shoes as enchanting as the night sky. The animated teaser video reveals styles from Christian Louboutin's latest collection as well as the holiday window displays at 36 of his boutiques worldwide. While waiting for the full story to go live three days before Christmas, shop Louboutin for those who make the top your gift list this year.