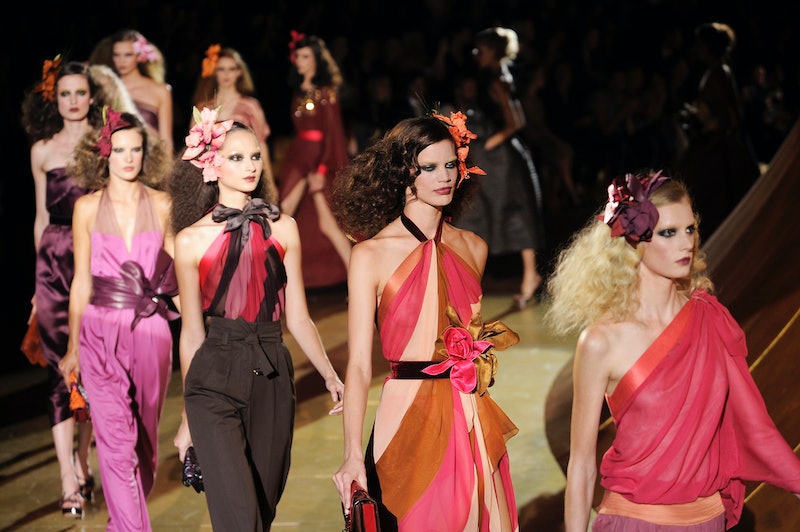 When it comes to Fashion Week, our super-chic EIC Rachel Zoe is a true veteran of the glitz, glamour, chaos and endless sartorial excitement. She has too many incredible NYFW memories to list here (or anywhere for that matter), but in celebration of this season’s shows just beginning in the Big Apple, we asked her to let us in on a few of the most memorable events and happenings that stand out in her mind. Will this season provide any of its own iconic moments? We can’t wait to find out.

"I couldn’t have been luckier to have launched my career in the late ’90s. Whenever I saw Kate, Naomi, Christy or Helena walk, I literally froze in my tracks." Photo: Getty Images

"If I had to pick my favorite Marc Jacobs collection of all-time, it would be every look from his Spring 2011 show. Marc never disappoints, but those big, brushed-out curls and ’70s-inspired silhouettes in vibrant pops of pink? I’m forever speechless."

"The Waverly Inn was the perfect venue for Calvin Klein’s post-show dinner back in 2008. It was an intimate affair with good friends, including Calvin Klein Women’s Creative Director Francisco Costa. I couldn’t have asked for a better way to close out NYFW." Photo: Getty Images

"Before Oscar held his shows at his showroom, he presented in a building on Park Avenue. There was something so special about his Spring 2011 show there—the dramatic gowns, the mood, the flawless models; it was all so magical." Photo: Getty Images

"I’ll never forget one time early in my career when I crashed a Marc Jacobs show! It was such a rush." Photo: Getty Images

"I launched my collection in Fall 2011, but it wasn't until Fall 2012 that I had my first runway presentation during New York Fashion Week. As long as I can remember I've dreamed of showing at the tents. When I think back to that moment—all the anticipation and countless hours of work—I get chills." Photo: Getty Images

"For Spring 2015, Polo Ralph Lauren ditched the runway for a 4-D, holographic presentation in the middle of Central Park. Golf carts transported us to the venue where waiters passed around delicious appetizers—it was unreal." Photo: Getty Images

"The Row’s first presentation at The Carlyle in the fall of 2010 was so beautiful and unexpected—models wafted by while everyone enjoyed morning tea. It was such a chic beginning for them. The show’s turnout and the overall maturity of the collection really reflected the talent of Ashley and Mary-Kate." Photo: FirstView

"I was so honored when Naomi Campbell asked me to style her Fashion for Relief Haiti runway show in 2010. The show closed with models wearing Alexander McQueen to pay homage to the late designer who had just passed away." Photo: Getty Images