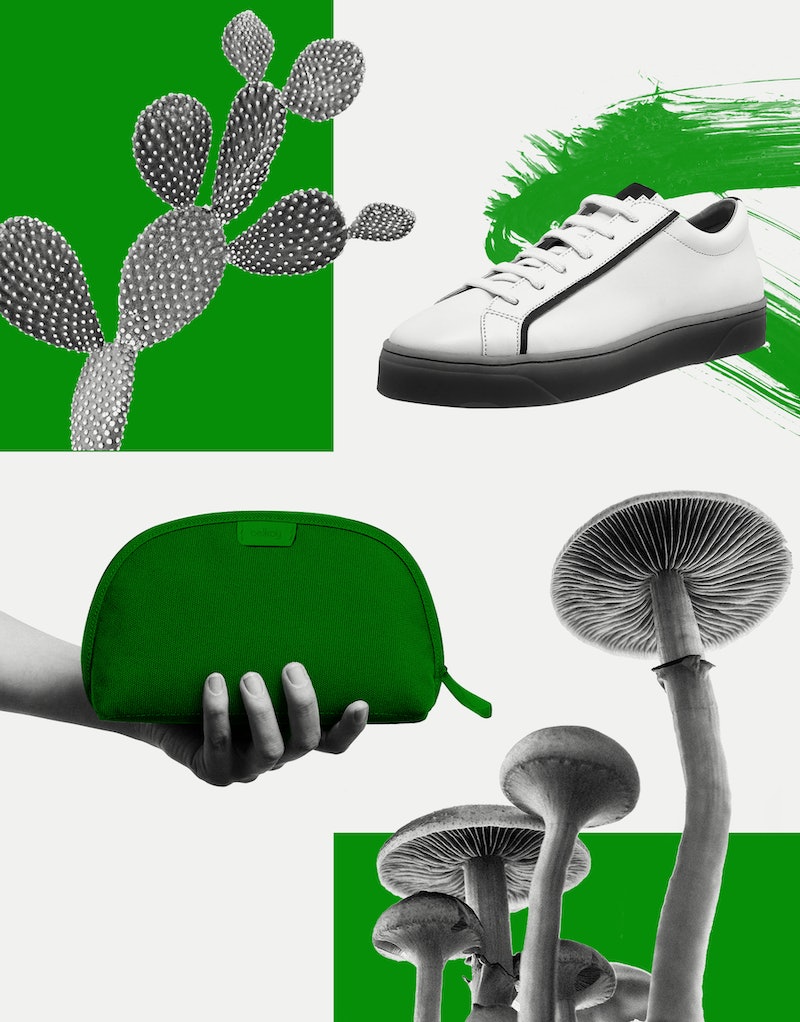 In Casey Dworkin’s ideal world, building a pair of shoes would be a bit like putting together a salad: you’d have your pick of plant-based leathers made of apple, cacti, grape, or mushroom; insoles might be composed of zucchini fiber or coconut husks; laces could be spun from flax and hemp. Dworkin’s plant-based fashion brand, Sylven, launched its first sneaker on Earth Day this year, and while the style is hardly edible, it features several natural alternatives to animal leather and virgin plastic, including a leather-like material derived from apple waste and insoles made from coconut husk fiber.

Sourcing components that were both entirely vegan and as sustainable as possible was a two-and-a-half-year process, she says, in part because “sustainability” has become a buzzword that companies throw around indiscriminately.

“When you break it down, there's still so much greenwashing, even on the material sourcing end,” she says. At one materials fair, she recalls, a supplier pitched her an “almond-based” outsole that, when she requested technical specs, turned out to contain less than 5 percent almonds.

The outsize promises made by companies throughout the supply chain illustrate just how much demand there is for fashion that is minimally harmful to the environment. But, textile innovation doesn’t happen overnight — and not all “sustainable” materials are created equal.

Even recycled polyester sheds microplastics into the world’s waterways, for instance, and the production of bamboo rayon requires a host of toxic chemicals. As for vegan leather, the vast majority is made from polyurethane (PU) or polyvinyl chloride (PVC) — both of which are plastic and petroleum-based.

For a less ecologically destructive future, fashion needs to find alternative materials that don’t come with such major tradeoffs. As interest in the space heats up, several have risen to the forefront, including lab-grown leather substitutes made from mycelium, the web-like root structure of mushrooms; textile-quality fibers produced from food-crop waste; and algae-based bioplastics that could eventually stand in for synthetics like vinyl.

“Creating products from food waste and growing materials in the lab — I'm convinced that this is going to be the future,” says Kristine Upesleja, founder and manager of the Innovative Materials Department and Collection at FIDM.

She’s keeping a close eye on Orange Fiber, an Italian company developing silk-like fabrics from citrus-juice byproducts. The company, which has collaborated with Salvatore Ferragamo and H&M, extracts citrus cellulose from the peels, pulp, and pith leftover from industrial juice-squeezing. It then spins the polymer into yarn that can be used to create textiles.

Upesleja is also bullish on Agraloop, an innovative new process developed by Los Angeles-based regenerative technology company Circular Systems. Agraloop uses agricultural waste inputs such as pineapple leaves, sugarcane bark, and oilseed flax stems — millions of tons of which are usually burned or left to rot, releasing pollutants into the atmosphere — to create a natural fiber that can be blended with organic cotton and other fibers and spun into yarn.

Both of these materials are already commercially available, albeit still in their early stages, and Upesleja cautions that there is still a long way to go before most futuristic lab-grown and waste-generated textiles are ready for mass production.

The lag time between scientific breakthroughs and products going to market is significant, especially in comparison with fashion’s current blink-and-you’ll-miss-it attention span.

Modern Meadow, one of the most prominent names in lab-grown leather, was founded in 2011 and unveiled its first fashion item — a T-shirt made from its signature “biofabricated” leather, grown in a lab from plant-based collagen — in 2017 at an exhibition at The Museum of Modern Art. While the innovation generated a flurry of press at the time, it was still a prototype, and the company is today working behind-the-scenes with as-yet-unnamed fashion industry partners on its first products that will be available for sale.

Similarly, it will likely be many years before we understand the potential promise of mushroom leather, though brands including Stella McCartney, Adidas, Hermès, and Lululemon have announced partnerships with Bolt Threads and MycoWorks, two companies that are developing mycelium-based technologies.

Earlier this month, Adidas revealed the first fruits of its efforts, a Stan Smith sneaker made from Mylo, a material grown in a lab from mycelium cells and treated to look, feel, and function like leather. While the sneaker is currently a concept style only, Adidas is expected to release a limited-edition drop at the end of 2021, with the intention of scaling up production with Bolt Threads in the months and years to come.

Hermès, meanwhile, collaborated with MycoWorks on a handbag made with Sylvania, a biofabricated “leather” also made from mycelium. The Victoria bag debuted in March following three years of product development and is slated to be available for purchase by the end of the year.

While Upesleja is pleased to see major brands making investments in sustainable materials, she also notes that one-off designs aren’t nearly enough to overhaul the fashion system. “It takes a lot of money — tons of money — and persistence to really pull this through if you are really committed to creating a 100%-transparent, eco-friendly or circular fashion line,” she says.

Still, brands can start small: Bellroy, an Australian accessories company, recently introduced a line of pouches featuring brand tabs made from Mirum, a leather alternative that — unlike any other plant-based “leather” on the market — contains absolutely no petrochemicals. (Others, including mushroom and apple leather, still contain some percentage of synthetics for binding or coating.)

Developed by Natural Fiber Welding, a company focused on plant-powered performance textiles, Mirum uses only natural inputs such as cork, rice, and coconut coir. The material launched earlier this year for use in patches and trims, and the vote of confidence it has already received from the fashion industry — including a $2 million investment from Allbirds and a product in Ralph Lauren’s Team USA Olympic collection — suggests it will soon see broader applications.

Bellroy founder and CEO Andy Fallshaw says his team was enthusiastic about Mirum’s potential from the start, and they are already testing new ways to incorporate it more broadly into wallets and other small leather goods.

For now, he says, “We decided to put it just in as a brand tab, because that's a low demand environment. It carries our brand, but you don't bend it, flex it, rub it, abrade it much.” This, he says, “lets us start to establish a supply chain for this material” while the team tweaks its designs to accommodate Mirum’s current properties and while Natural Fiber Welding works on future iterations of the material that will hold up to more wear-and-tear.

With existing leather alternatives like PU, she says “you could simply just come in and substitute it into an existing product, but ultimately what you were compromising on was your sustainability and your environmental impact… whereas now we're at a point where there are new and exciting technologies that truly do have incredible impact, but you have to start to rethink how that works into your product.”

If and when Bellroy does introduce a Mirum wallet (or tote bag or phone case), it will have to perform as well or better than its less sustainable counterparts.

“The number one impact we can have in the world is to make products that are used and loved for as long as possible,” says Fallshaw.