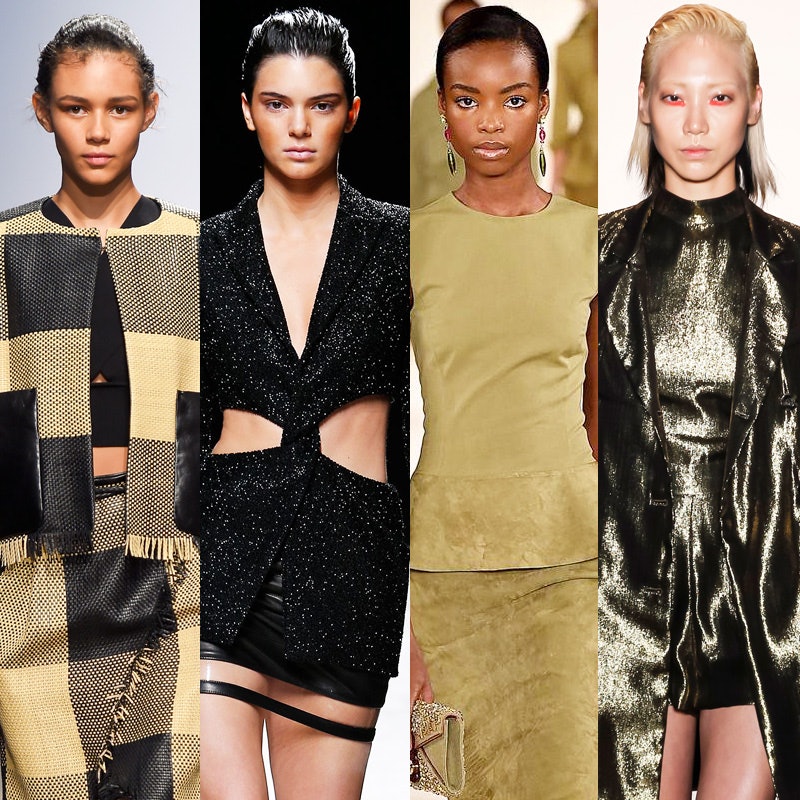 It’s the clothes, of course, that take center stage at Fashion Week, but the gorgeous gene pool-winners sporting them on the catwalks are also the stars of the show. We can’t deny our infatuation with models: Not only are they lovely to look at, their off-duty style is always impeccable. And let’s get real, without these beauties, the show would not go on. From an Estonian stunner to a blue-eyed bombshell who has conquered almost as many catwalks as years she is old, these 10 runway babes walked many a designer show over the past month, capturing our attention and affection. We can’t wait to see what their fashion futures hold.

The Stars Of The Catwalk

This 18-year-old showstopper was spotted on the catwalks of Sportmax, Marc Jacobs and Versace, to name only a few. Fun fact: her real name is Leona but goes by the nickname "Binx," as in "Jar Jar Binx" from Star Wars. Photo: Sportmax Spring 2015

This Dutch bombshell looks to the fashion houses of Valentino, Dolce & Gabbana and Prada for inspiration for her personal style. At the mere age of 17, she's already strutted the runways of Burberry, Fendi and Michael Kors. Photo: Burberry Spring 2015

Originally from Korea, 26-year-old Soo Joo moved to California at the age of 10 and was scouted in San Francisco after graduating college. It's no surprise she's landed gigs with respected fashion houses including Cushnie et Ochs, Peter Som and DKNY. Photo: Peter Som Spring 2015

This blue-eyed beaut from The Netherlands has walked almost as many runways as years she is young (she's 19!)—Oscar de la Renta, Gucci and Tom Ford among them. Photo: Gucci Spring 2015

How gorj is Malaika? A 20-year-old veteran of shows including Michael Kors, Diane von Furstenberg and Marc Jacobs, this Kenyan-born Brit is one to keep an eye on. Photo: Michael Kors Spring 2015

Yes she is a member of reality televison's most famous family, but this Cali-born babe might be the next queen of the runway. At 19, Kendall (Kim's sis) has already made appearances on the catwalks of Emilio Pucci, Balmain and Donna Karan. Photo: Balmain Spring 2015, FirstView

A self-professed fan of all-you-can-eat buffets and '90s rock, this 21-year-old Estonian stunner has already made her mark at the shows of big-time designers such as Dolce & Gabbana, Carolina Herrera and Versace. Photo: Carolina Herrera Spring 2015

Consider 21-year-old Maria Borges the modern-day Naomi Campbell. Maria is often quoted saying she looks up to the legendary supermodel and hopes to be as successful as she is one day. Based on her runway track record (Ralph Lauren, DVF and Carolina Herrera), we think that's likely. Photo: Ralph Lauren Spring 2015

This Argentinian model is currently the face of Prada's Fall 2014 campaign and is reigning the runways this week in Paris at the Anthony Vaccarello, Lanvin and—of course—Prada shows. We heart her. Photo: Anthony Vacarello Spring 2015

Get The Look: Model Off-Duty