The designer and creative director talks about a new era of streetwear. 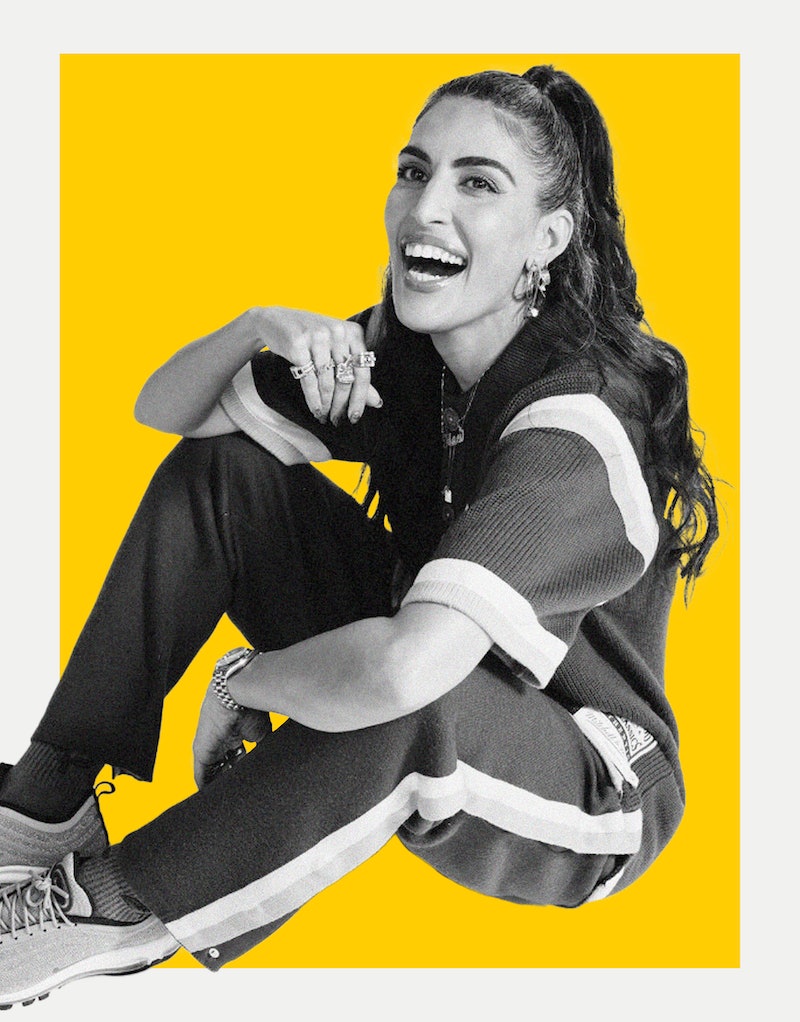 The pandemic made sweatpants a wardrobe staple the world around. But they’re old news for designer and creative director Melody Ehsani. L.A.-based Ehsani carved a space for herself in the often male-dominated streetwear space, launching her own line of comfy separates, accessories, and jewelry. Her namesake label stands out as one of the few women-led brands that have been able to successfully tap into the market, with a storefront in L.A. that counts Supreme and sneaker store Flight Club as neighbors. With the addition of her podcast Business of Hype and new role as the creative director of women’s business at Foot Locker, Ehsani is helping to usher in a new and more inclusive era of streetwear culture.

Ehsani’s own take on fashion mirrors the pieces she creates — playful, casual, and multipurpose. In fact, Ehsani explains over the phone that she’s always approached design by simply creating what she wants to wear. “I always use myself as the gauge of where people are at because I feel like I'm so tapped into the collective consciousness, she says. Below, Ehsani shares more about building her brand, challenging stereotypes within the streetwear space, and what’s been on her shopping list in the midst of the pandemic.

TZR: Casual, comfortable streetwear was already ingrained in your style. Was that easy to keep up with during the pandemic or are you sick of sweats now?

ME: I don't think I'll ever get sick of sweats, but I mean even though I've always worn pretty comfortable clothing. I never really thought about what I was wearing, I was more excited to figure out how to put things together and wear them. I think that's what I've lost this last year ... I just don't think about how things go together, which is why I feel like sweat suits are just such a go-to because it's so much easier to just wear an entire monochromatic outfit that's just cozy.

At some point in the pandemic, I got all wild and I bought a pair of shoes, sort of high heels, online that I loved and they just kind of made me happy. But I haven't worn them and I don't foresee myself wearing them for a long time. They're Bottega Veneta and my favorite color is green, and I rarely find heels in a great shade of green that I love, and they made these... They look like laser-cut, square toe, they're just beautiful shoes.

TZR: Outside of your own creations, what have been some of your favorite sweats over the last year?

ME: My friend Beth started a brand called Bephies Beauty Supply, then I love Noah NY, their brand is incredible, and I also love Awake, and it's also a big part of New York and Infinite Archives.

TZR: From a design perspective, how have you thought about your own collections differently over the last year?

ME: I've always designed what I want to wear. I always use myself as the gauge of where people are at because I feel like I'm so tapped into the collective consciousness. I have definitely designed things that are a lot easier, whereas before I would take more risk, but would maybe have more concise messaging. I feel like it's become a lot easier and more effortless so that you don't really have to think about what you're wearing so much. You can just show up and be you without having to stress about your outfit that day.

TZR: You also brought on an investment partner for the first time in 2020. As a woman and a woman of color especially, it’s a notoriously challenging thing to do. What was that experience like for you?

ME: I actually started thinking about raising money for my business in 2018. And so I went through a whole process of learning what it looks like: What kind of people do I talk to? What kind of materials do I need? What's my elevator pitch, so to speak? It was really, really challenging finding any types of investors, so I sort of was on that path for a couple years and then I just quit it.

Last year, there was a friend that was introduced to this gentleman that owned this fund, and he also owned his own production. He has factories that do a lot of production for a number of brands, and he actually suggested getting an investor to me. It was the first time that something like that had ever happened because before that it was so hard to seek anybody out that valued the line at the time.

Just taking the money wasn't important to me. I really wanted to take on a partner that also understood my vision, and my brand, and a lot of investors sort of come in and try to change you, and I really just wanted somebody to empower me more so, with their resources.

Production was probably the hardest part of my business, just finding the right company factory. Even before the pandemic, small brands were working really hard to get priority and make [a production] deadline. What this partner has really done is to streamline the manufacturing process, which is really why I was able to have enough energy to take on another role. Before I was just focusing on running every aspect of my own company, but I didn't really have time for anything else.

TZR: What has the process been like of taking on your new role as creative director of women’s business at Foot Locker?

ME: I've been doing creative direction for my own brand since I started it. So the actual job is not that much different than what I already do, which is what's great, it's just about the amount of support that I have while doing it. In my own company, since I started it 13 years ago, I've worn every single hat and continue to wear a number of different hats.

I love being creative and I don't completely love and want to deal with the business side of things, I don't really want to deal with the management side of things. So when I took on the investor, they were able to help support my business in that way, where I didn't have to do those things and it just felt like a huge weight had been lifted off so that I had more time to just design and be creative and then approach the infrastructure of it that I need.

TZR: In streetwear, after a history of being designed by and for men, there has been a slow movement to have pieces that are actually constructed for women and can be worn by men or are truly unisex. How at Footlocker have you been able to explore that space?

ME: The topic of equality across the board has become trendy right now. Companies are just trying to be on the right side of things, but that doesn't mean that any type of actual change is happening or has happened yet, which is what I think we have to really keep in mind. Just because it allowed one different person into the club, that doesn't mean that there is equality now.

The first year at ComplexCon had the most staggering statistic to me because 98% of the brands are all men's brands and 50% of the attendance and the purchases were done by women and that's just one event. For a long time, just in my small career, women's products often feel like an afterthought to those companies, because they've invested in the men's, it's sort of like they'll throw you a bone and do a small collaboration here, or run it in a woman's size there, or add a couple of new colors but [it’s] not really thoughtful, there's no storytelling.

What's great about Footlocker is that it's a creation of this role. I feel like they're actually making a commitment to their women's business. It's not a one-off, it's not a collaboration, it's not a project, it's sort of them committing to a role and putting a team behind it of people that are dedicated just to this side of their business, which I think is really important.

TZR: In your Beauty Of Becoming video with Levi's, you discuss challenging the stereotypical ways that brands separate women’s and men’s products. How have you challenged those stereotypes?

ME: My first job was at the Baby Gap in the mall and the little boy's stuff was so cool and it was designed for a purpose which was always super active and girls stuff was always like ‘don't go in the yard,’ ‘make sure you don't get this dirty.’ So delicate and fragile. It always irked me so much and it hasn't really changed. I mean, not to say that... Even as a woman, sometimes I want to be more soft and sometimes I do want to wear something frilly, but I want to have the option. I mean, we're such holograms. There's no one interpretation and I think that because it's been interpreted by a male's views for so long, we've really been boxed. And I think that's why so many people are really questioning the primary right now.

TZR: What have your own shopping habits been over the last few months?

ME: I've been buying a lot of vintage stuff, I've been on Etsy and Poshmark. I think because I have more time, most of my shopping has been done online. I just have been digging through different things that I've been interested in. I just bought a pair of these Nike ISPA's that I couldn't find on StockX. That's pretty much it for my fashion purchases, I think more than anything I've just been buying books and candles.

I just read Homegoing and it's by Yaa Gyasi, it was an incredible novel, I highly, highly recommend it. And my favorite candle, I have one by Le Labo called Santal. I actually OD'd on it and I couldn't get it, I needed a break from it and I just re-bought it and I had just enough time to miss it and now I love it again.