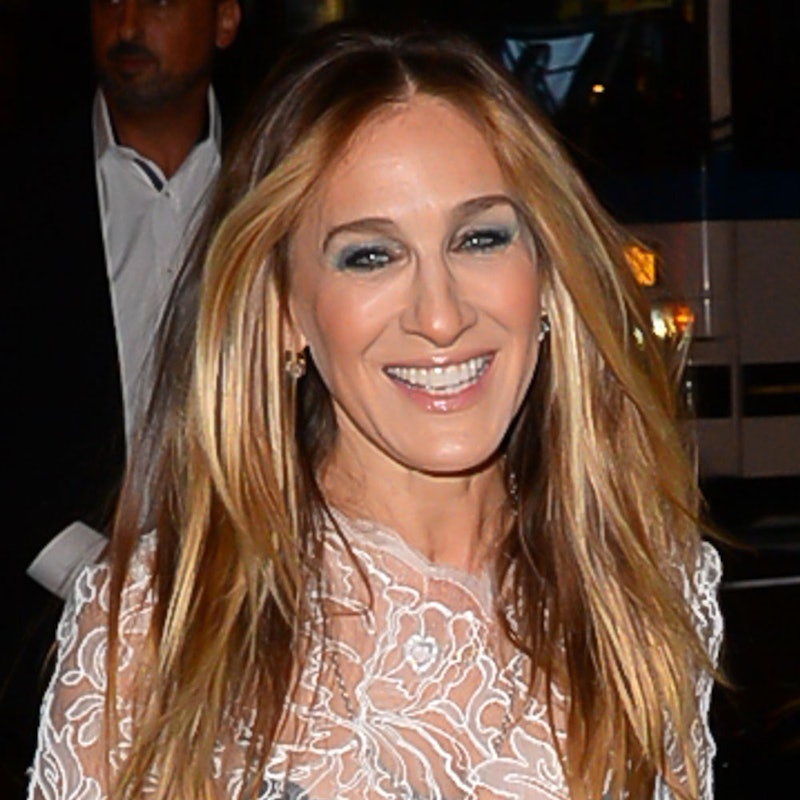 For better or worse, she’ll forever be equated with Carrie Bradshaw—but in real life, Sarah Jessica Parker‘s fashion risks are equally divine (see: every look she’s ever worn to the Met Gala). What’s even better, the designer and actor has an uncanny ability to meld classic style with cutting edge, all with an ageless grace we can only hope to achieve. For her latest, SJP demonstrated how women over 40 can appear at once sophisticated and sexy in an outfit Carrie would have totally worn—a custom black and white lace dress by Oscar de la Renta. The full mid-length skirt is akin to many a Carrie ensemble—and that peek of bra? Va va voom! Glimmering metallic pumps (again, entirely Carrie) from SJP’s own shoe collection are the perfect finish to all those soon-to-come holiday party outfits or as a glitzy punctuation to denim. Here, see the stunning look and shop three similar styles from Sarah Jessica’s shoe line. Then, continue on for more of her best looks to date.

At the Intimissimi store grand opening in NYC, 2017

In Monse With A Gabriela Hearst Bag

At the 74th annual Golden Globe Awards in Los Angeles, 2017

At the L'Eden by Perrier-Jouët opening night in Miami, 2016

In A Midi Dress And SJP Heels

At the AOL Build Series in New York City to discuss Divorce, 2016

In Monse And SJP Heels

At the 2016 Met Gala afterparty in New York City

In A Philip Treacy Headpiece And SJP x H&M Dress

In SJP For Tome

At a Tome cocktail event in New York City, 2015

In A Black Top And Pencil Skirt

At the Architectural Digest cocktail party in honor of Valentino Garavani, 2012

In An Orange Printed Dress