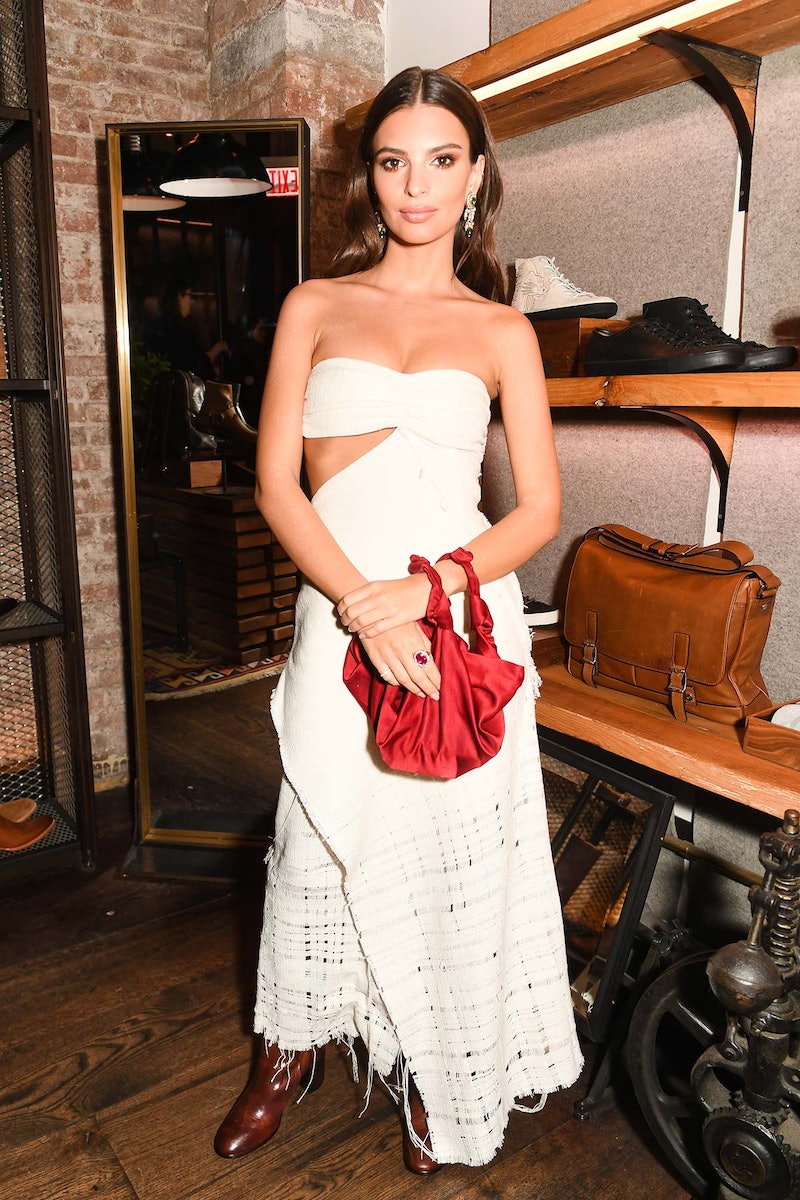 We can all agree Emily Ratajkowski’s got sexy down to a science, but, over the years, the model and actress has proven she’s also quite the sartorial chameleon. Although never one to shy away from showing some skin (thigh-high slits and plunging necklines are her looks of choice for the red carpet), she will often surprise us with unexpected ensembles ranging from menswear-inspired suits to ultra-feminine maxis. Most recently, the brunette bombshell donned a cutout asymmetrical maxi dress for a Frye event in New York City. While such frocks would oft be finished off with a sexy barely-there heel, Emily did the unexpected and paired it with tall leather boots—bringing the look down to earth for an I’m-not-trying-too-hard vibe. See the complete ensemble ahead (and score a similar matching set) along with more of her unforgettable outfits.

In Pringle Of Scotland Dress, Frye Boots And The Row Bag

In A Fringe Dress

At the Atelier Swarovski By Jason Wu dinner in Paris, 2017

In A Brock Collection Dress And Altuzarra Shoes

At the Vogue Foundation Dinner in Paris

At the 2017 Cannes Film Festival

At the 2017 Cannes Film Festival

In Levi's With Poppy Delevingne

At the Levi's brunch at Sparrows Lodge in Palm Springs, CA during Coachella, April 2017

In By Far Shoes

At the cocktail reception for the LVMH Prize 2017 in Paris

At Valentino's Fall 2017 show in Paris

At the 2017 Vanity Fair Oscar Party in Los Angeles

At the 2017 Golden Globe Awards

In Levi's Denim With A Pop & Suki Camera Bag

At the 2016 Emmy Awards in Los Angeles

At the 2016 CFDA Fashion Awards in New York City

At the 2016 Met Gala After-Party in New York City

At the 2016 Vanity Fair Oscar Party in Los Angeles

In Mother Denim With A Gucci Shoulder Bag

At the Annual Diamond Ball in Santa Monica, December 2015

In A Primark Skirt And Giuseppe Zanotti Heels

At the TargetStyle In Vogue Event in New York City, September 2015

In A Brunello Cucinelli Skirt And Sophia Webster Sandals

At the Extra studio in New York City, August 2015

At the We Are Your Friends premiere in Miami, August 2015

At the We Are Your Friends premiere in Paris, August 2015

At the We Are Your Friends premiere in London, August 2015

In A Zimmermann Dress And Brian Atwood Boots

At the photo call for We Are Your Friends in London, August 2015

At the 2015 Tony Awards in New York City

On the way to the Vogue Pre-Met Gala Pajama Party in New York City, May 2015

In A Barbara Bui Top And Cédric Charlier Pants

At the Samsung Studio Grand Opening in Los Angeles, April 2015

At The Zoe Report x DVF Brunch in Palm Springs during the Coachella Music Festival, April 2015

At the 2015 MTV Movie Awards in Los Angeles