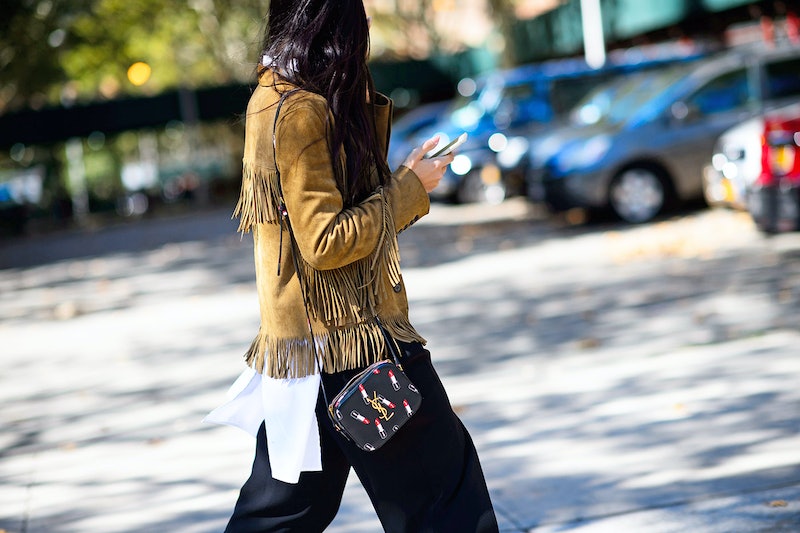 A lot can happen in the course of a year—especially when it comes to the fashion industry. Trends change; hemlines go up and down and back up again; It bags come and go; designers enter and exit labels, and so on and so on. Sometimes, a single silhouette becomes pervasive (I’m looking at you, culotte), an accessory makes a major impact (hey, Chloe Drew bag), or one luxury item takes center stage (can you say fur-lined Gucci loafer?). Whatever the changes, the one thing you can count on in the fickle industry that is fashion is that there will be evolution, that what mattered last year may be this year's old news and what was once coveted is now on clearance.

If there is one thing 2015 will be remembered for it just may be the game of musical chairs that designers seemed to so intent on playing this year. A little more than a year after Marisa Webb was named creative director of Banana Republic, she was out. Alexander Wang and Balenciaga parted ways this past summer after less than three years together. Reed Krakoff suspended operations of his eponymous line, while Donna Karan exited her position at the helm of her groundbreaking fashion line in June, and the main Donna Karan collection was halted for the time being. Another fashion icon, Ralph Lauren, stepped down as chief executive of his legendary brand after almost 50 years in the role, making way for Stefan Larsson—most recently the global president of Old Navy—to attempt to fill his perfectly worn-in vintage cowboy boots. Madewell head of design, Somsack Sikhounmuong, was charged with heading up J.Crew’s women’s sector in an attempt to reverse the company’s slumping sales. Then in October, it what seemed to be a fashion avalanche, Raf Simons exited Dior after three years (ironically, Dior and I, a documentary on the creation of his first haute couture line was also released this year). Seemingly minutes later, it was announced that Alber Elbaz was being pushed out of Lanvin after 14 years. Considering the fact Elbaz helped reinvigorate the French house over his much-acclaimed tenure there, it seemed official that nothing in fashion was certain anymore.

If this past year will be remembered for designers going in and out of houses, it will also be recalled for hemlines going up—ironically not in skirts, but in pants. Wide-legged, ankle-baring culottes became the pant de rigueur, while denim also rose to the occasion, making the cropped jean a must-have silhouette and at the same time creating a need for really fabulous boots (see brocade and velvet footwear on the rise). Additionally, all things ’70s inspired continued to dominate (suede everything, bell-bottoms, ponchos), especially if those throwback items happened to have fringe on them. (Basically, if it moved in the wind, it was coveted in 2015.) And while vintage cool reigned supreme, Normcore—2014’s most pervasive trend—evolved into an obsession with menswear and general androgyny (think vest, blazers, trousers and brogues), making classic silhouettes and well-made staples more important to have in one’s closet perhaps than ever before.

And when it came to who was wearing all of the aforementioned must-haves, we as a fashion-obsessed society could not tear our eyes away from the supermodels who wore them best. It seemed 2015 belonged to the young, fresh and abnormally attractive faces that can be simply referred to by their first names: Cara, Gigi, Kendall, Karlie, Jourdan and the like. Whatever they were wearing, wherever they were going (more often than not in a crew together, sometimes accompanied by Taylor Swift), we were fascinated. It was the girl posse to end all girl posses, and if we couldn’t be a part of it, we at the very least wanted to watch all of their incredibly chic, perfectly put-together movements play out on social media.

It’s hard to be objective about a year yet to end, but when all is said and done and worn, 2015 seems to have been a good year in the endless story that is fashion. It offered a few surprises (truth be told, we are still reeling from Raf’s and Elber’s departures) and plenty of things we can continue to learn from as we enter into the next 365 days (Is there a culotte for everyone? We are still unsure). The best part about coming to the end of the year is the unknown possibilities that lie ahead in the next one. If we’ve learned nothing else about fashion it’s that truly anything can happen. And we at The Zoe Report promise to continue to cover it as soon as it does.