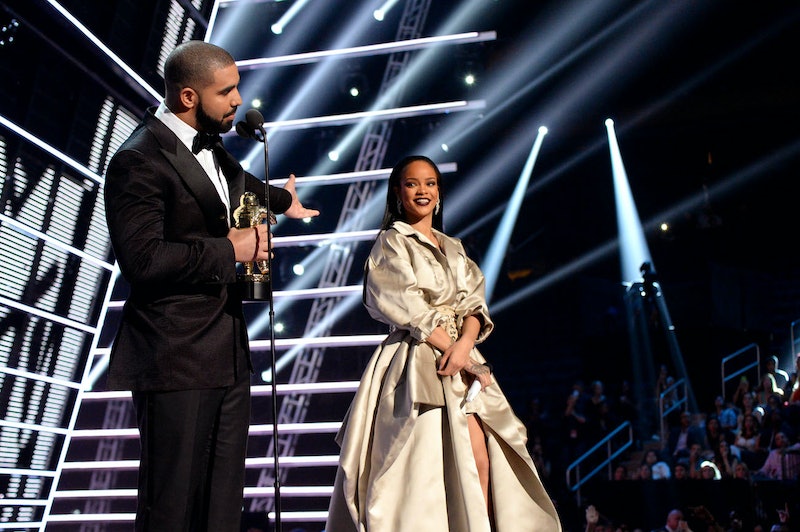 True to form, this year’s Video Music Awards took us through a whirlwind of emotions, including but not limited to happiness, envy, confusion, nostalgia, shock and amazement. Whether you missed out on the live stream or just want to relive it, we’ve got you covered. From the pre-show to the closing credits, we rounded up the most notable happenings from the glamorous night; consider it your cheat sheet so you don’t get left behind during tomorrow’s lunch hour debriefing.

Beyonce Made A Political Statement

Our favorite diva called a very special group of ladies into formation - the mothers of police violence victims Trayvon Martin, Mike Brown, Eric Garner and Oscar Grant. We bow down to this powerful gesture.

America's favorite gold-winning girls Simone Biles, Laurie Hernandez, Aly Raisman, and Madison Kocian graced the carpet in chic short dresses (sans Gabby Douglas). Biles, who was homeschooled, considered the event the prom she never had. We'd opt for presenting an award to Beyonce over a school dance any day.

The Scottish DJ won Best Male Video for his mega hit "This Is What You Came For," which was not-so-secretly co-written by his ex-girlfriend Taylor Swift. However, during his video acceptance speech, he failed to thank the singer. Awkward.

On the heels of winning Best Breakthrough Long Form Video, Beyonce treated us all to an incredible 17-minute-long "Lemonade" medley that we will not soon forget. This was obviously infinitely more exciting than Kanye's four minutes of free speech.

Drake Declared His Love For Rihanna

While presenting Rihanna with the Video Vanguard Award, Drake gushed "She's someone I've been in love with since I was 22 years old." The world collectively started to swoon, until Rihanna seemingly dejected him when he went in for the kiss. The jury is still out on what it all means.

The Comedy Central alums acted as MCs, dishing out silly banter to supplement the show's performances and speeches. Sometimes we laughed, sometimes we didn't, but overall we're glad they came.

Taylor Swift Was A No-Show

We waited with bated breath for the camera to pan to Taylor Swift to gauge her reaction during Kanye's speech - but the pop singer never materialized. Instead, she was busy fulfilling jury duty obligations and taking fan photos at a courthouse in Nashville. Your move, West.