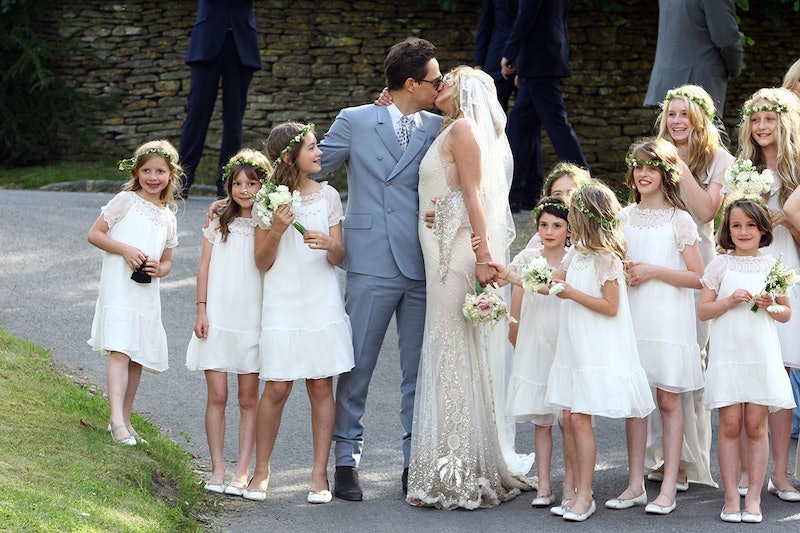 Few things can cause you to question your path in life quite like a wedding feature in Vogue. Who are these impossibly beautiful creatures, how did they manage to afford such impossibly extravagant events and what is the number for their wedding planner because we need to start trying to befriend her ASAP? As the year winds down and New Year’s resolutions loom large in the not-too-distant future, we thought we’d compile some of Vogue‘s most memorable wedding spreads as a bit of visual inspiration towards what your life can look like if you work very hard … to be adopted by the 1% and suddenly become an heiress. Best of luck!

If you've ever wanted to feel not-so-great about your own wedding day (past or future), we suggest you bookmark this wedding slideshow ASAP. Porter Grey co-founder and chef Kristen O'Neill married investment banker Brett Shapiro in Positano, Italy on the Amalfi Coast this October. The flotillas pictured above were used to ferry guests to a welcome dinner at the Treville Beach Club, where guests enjoyed their meal at a long table which ran parallel to the sea. Other notably over-the-top amazing details include the following: guests received copies of Cabana Magazine's special collaboration with Gucci, the cover of which matched the Gucci dress the bride wore to welcome her guests; dinner plates, linens and napkins for the reception were hand-painted; and the puff-pastry cake, a surprise from the bride's sister, was a giant, heart-shaped, raspberry-topped vision. See the full slideshow here.

If you're hoping to one day have a Vogue-worthy wedding, it doesn't hurt to enjoy a stint modeling for Victoria's Secret at some point prior—former angel Ana Beatriz Barros married businessman Karim El-Chiaty in Mykonos this past July in custom Valentino, and the pictures littered our Instagram feeds—and later, Vogue (like so many reminders of all the ways in which we've gone wrong in life). After the ceremony, Ana changed into a one-of-a-kind Roberto Cavalli beaded gown designed by Peter Dundas who was, of course, in attendance. Earth, Wind & Fire played the reception, which is probably just like the random band you hired, or will hire, for your own nuptials. Remember, jealousy is unproductive but sit-ups, on the other hand, are not (just ask the angels). See more of the inspiring photos here.

In December of 2015, art director Sofia Sanchez Barrenchea wed events producer Alexandre de Betak on a deserted beach in Patagonia. Various dress codes for the three-day affair included white tie (for the midday beach ceremony), Gauncho and "Tango chic," though the wedding's mascot—Darth Vader—was exempted from all three. For her part, the bride wore Valentino, the embroidery for which took 1,800 hours. To feed Sofia, Alexandre and their 300 guests, Argentine chef Francis Mallmann and his staff of 240 prepared feasts in the middle of far-flung fields and forests. Does this mean we can't cater Chick-Fil-A on our wedding day? Sigh. View all of the wedding's incredible photos here.

Anyone named Baroness Cleopatra von Adelsheim von Ernest has to throw themselves a wedding for the ages, right? Somehow, we can't picture this bride having married her groom, Prince Franz Albrect zu Oettingen-Spielberg, at an all-inclusive resort in the Bahamas or somewhere equally as pedestrian. (Also, we're now considering faking our own deaths just to be reborn as Baroness Cleopatra, which is basically the best name ever.) Instead, they married in Oettingen, Bavaria, with 800 guests in attendance as their witnesses. The bride wore custom Luisa Beccaria topped with the Oettingen House diadem, a diamond tiara. See more of the big day's envy-inducing photography here.

Jewelry designer Sabine Ghanem and financier Joseph Getty wed in the same Roman basilica in which the groom's parents had said their vows 33 years earlier. While sweet, this is not, the most interesting of the affair's anecdotes. The night before the wedding, guests were encouraged to dress in costume from the 18th century for a Liaisons Dangereuse-themed party. For the ceremony, Sabine traded in her corsets for a dramatic duchess-silk gown embroidered with giant gold suns and accompanied by a magnificent cape adorned in the same motif. View the full slideshow here.

When a couple casually gets married in the Museum of Natural History in Manhattan, you know they mean business. Vogue Communications and Marketing Manager Elizabeth Fisch and her groom, Michael Dishi, choose the venue because it was a favorite playground for Elizabeth in her youth. The high school sweethearts married in a traditional Jewish ceremony followed by a decidedly less traditional reception held beneath the iconic blue whale in the Hall of Ocean Life. As one would imagine, guests went crazy on Instagram—search #OffischallyDishi to see their photos or click here for more from Vogue.

This marriage may not have lasted, but the photographs it left behind are forever iconic. Supermodel Kate Moss decided to take the plunge at long last after watching an episode of Big Fat Gypsy Weddings, of all things. She and Kills guitarist Jamie Hince were wed in 2011 in an epic ceremony captured on film by Moss's longtime collaborator Mario Testino. Kate wore an equally epic dress designed by her friend John Galliano, who used Zelda Fitzgerald as his muse. As one might suspect, the guest list was one for the ages and included Gwen Stefani, Paul McCartney, Vivienne Westwood, Marc Jacobs and more. Revisit the wedding's most unforgettable images here.

Jacquetta Wheeler married James Allsop at her family home, which also just so happens to be a castle, in custom Alice Temperley and a veil which took ten embroiderers a month to make. At the dinner which followed, tables were named for Moroccan towns reminiscent of the bride's second family home in Tangier. The evening topped off with fireworks timed to music which included Lykke Li's "I Follow Rivers." See more of the breathtaking photos here.

Lila McKean Warburton and Daniele Benatoff's story began with a 10-day love affair over the New Year's Eve holiday in St. Barth's (as all good love stories do). For their nuptials, the couple returned to the island, populating the entirety of Flamands Beach with family and friends for a four-day celebration. Lila wore Oscar de la Renta. See the photos here.

Michelle and Zach had originally planned to marry in the British Virgin Islands, but an ever-growing guest list forced them to seek out bigger venues in Europe. They eventually settled on the Ashford Castle in Ireland, and said their vows in the ruins of a nearby monastery. They wanted the decor to be low key—"When you get married in a castle, you don’t need to add much,” Michelle told Vogue—so they opted for natural items, like wildflowers, to set the stage. The bride's six outfit changes, however, were less understated and included pieces from Oscar de la Renta, Cushnie et Ochs, Zimmermann, Chanel and custom Maiyet (for the big day). After the reception, Zach "shot an arrow into a target that set off a display of fireworks over the lake," according to Vogue. See the amazing photographic evidence here.

This couple has the cutest love story we've ever heard—they met on a plane to India and were friends for years before they finally, on a backpacking trip to Vietnam, realized they were actually in love. Sigh. Ashwin moved to India, where the two soulmates were married in Jaisalmer, the heart of the Thar Desert. The several-days-long festivities began with a 500-person dinner in Delhi and culminated in a reception fueled by the tunes of DJ Bosco. After, Karishma and Ashwin headed to Myanmar for a month-long honeymoon. See all of the gorgeous photos here.