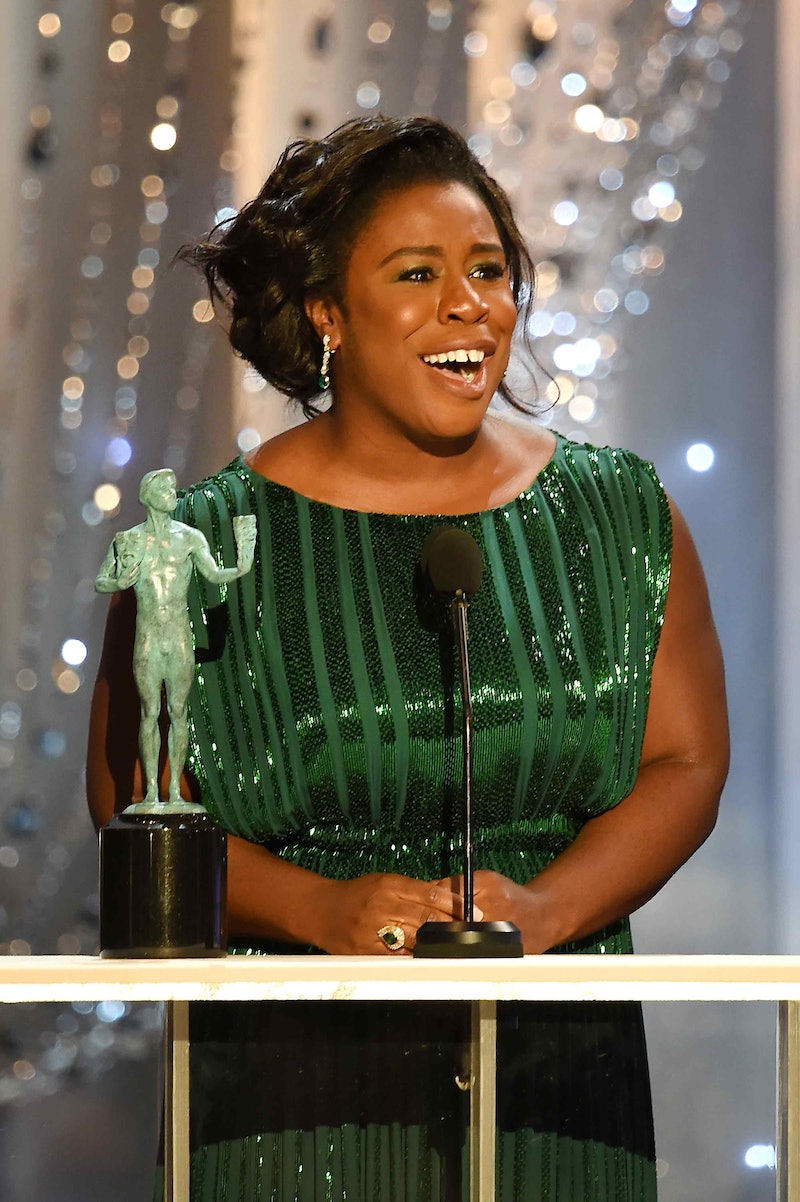 The SAG Awards just put the Oscars to shame with a winners’ circle that made the latter’s omission of any non-white nominees all the more glaring given how many clearly deserving actors could or should have made the cut. Idris Elba made history as the first male to win two SAG awards in one night, Uzo Aduba took home a trophy for the second year in a row, and cast members of the Oscars-snubbed Straight Outta Compton were actually (gasp!) invited. All told, the night was a winning one, with those who took to the podium showing genuine gratitude to the peers and friends who voted them into SAG history. Here, in case you missed them, are the most memorable moments of the night.

We loved the shout-out in the Orange Is The New Black actress' speech to struggling actors everywhere, encouraging them to keep working and ‘stay in line’ even when everyone is telling them to give up their dreams.

Jeffrey’s given quite a few speeches in the last two years, but he switched this one up with a sweet and thoughtful acknowledgment of the fact that his character in Transparent has financial means to which not every person in the transgender community has access.

Orange Is The New Black's Win

In accepting Orange Is the New Black’s award for Best Comedy Series, Laura nodded to the #OscarsSoWhite controversy by pointing out the diversity of her show’s cast.

No one could have been better cast to honor Carol Burnett than Tina and Amy, and their tribute to the iconic comedian was both touching and funny. In support of their theory that comedy is more difficult to execute than drama in terms of acting, Poehler said, “Let's all calm down about Leo DiCaprio and how hard it was to shoot 'The Revenant.' So you slept in a horse and ate bison liver. Big whoop. Carol would have slept in that horse, worn it, done a song and dance, and made a much funnier face after eating something disgusting.” She then closed out the speech by adding, “Thing is, Carol's better than all of us. We're going to give her a prize for it."

When 82-year-old Carol Burnett closed out her acceptance speech for the Lifetime Achievement Award with a line from The Carol Burnett Show's theme song, "I'm so glad we had this time together," there wasn't a dry eye in the room.

In another nod to the #OscarsSoWhite controversy, Idris Elba quipped "welcome to diverse TV" before introducing the film Beasts of No Nation.

It wasn't so much the content of Leo's speech that got to us, but more so just how genuinely appreciative he seemed to be of the win. “I’m truly humbled by this because it comes from all of you, my fellow actors," he said. "Thank you from the bottom of my heart.”