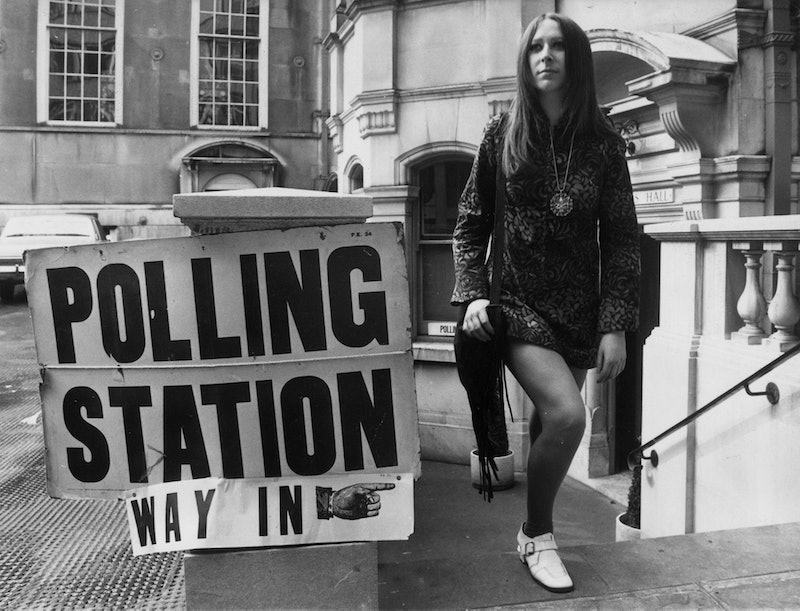 We have to admit feeling a bit nervous about the Republican National Convention, just because of everything going on in the world these days. So far, however, things seem to be under control, and we’re hoping they’ll stay passionate but peaceful. Here, some of the most notable moments from the RNC, updated as they happen.

Photographer Spencer Tunick organized the assembly of 100 naked women as part of a large-scale project called "Everything She Says Means Everything." The peaceful protest was meant to draw attention to some of the negative rhetoric and policies that supporters of the project believe Trump and others in his party have adopted in regards to women. Protesters appeared outside of the convention site the day before it began, holding mirrors which Tunick said in a statement were meant to "communicate that we are a reflection of ourselves, each other and of the world that surrounds us. The woman becomes the future and the future becomes the woman."

In the wake of police shootings in Dallas and Baton Rouge, local police unions in Cleveland asked the RNC to consider suspending the Ohio law that allows for open carry of firearms. Ultimately, however, no changes were made to the law in advance of RNC events.

The Late Show host Stephen Colbert, who is covering the RNC with former Daily Show host Jon Stewart, took to the stage Sunday dressed as Hunger Games character Caesar Flickerman. "It is my honor to launch and begin the 2016 Republican National Hungry for Power Games," he said. "I know I'm not supposed to be up here," he continued while being escorted off the stage. "But if we're honest, neither is Donald Trump."

Donald Trump's relatively press-shy wife, who has done very little public speaking on behalf of her husband so far this cycle, took to the podium on Monday night to support her husband. "Donald intends to represent all the people, not just some of the people. That includes Christians and Jews and Muslims. It includes Hispanics and African-Americans and Asians and the poor and the middle class. Throughout his career, Donald has successfully worked with people of many faiths and with many nations." She also joked that it "would not be a Trump contest without excitement and drama."

In the aftermath of her speech, Melania faced accusations that she (and her speechwriters) had plagiarized portions from a speech Michelle Obama gave in 2008. See the quotes in question below.

Melania Trump: "My parents impressed on me the values that you work hard for what you want in life; that your word is your bond and you do what you say and keep your promise; that you treat people with respect."

Michelle Obama: "And Barack and I were raised with so many of the same values: that you work hard for what you want in life; that your word is your bond and you do what you say you're going to do; that you treat people with dignity and respect, even if you don't know them, and even if you don't agree with them."

Melania Trump: "[My parents] taught me to show the values and morals in my daily life. That is the lesson that I continue to pass along to our son. And we need to pass those lessons on to the many generations to follow, because we want our children in this nation to know that the only limit to your achievements is the strength of your dreams and your willingness to work for them."

Michelle Obama: "And Barack Obama and I set out to build lives guided by these values, and pass them on to the next generations. Because we want our children, and all children in this nation, to know that the only limit to the height of your achievement is the reach of your dreams and your willingness to work for them."

Stephen Colbert resurrected his alter ego, a conservative blowhard, for a skit that brought Jon Stewart back from retirement. In it, Colbert finds Stewart living in solitude, blissfully unaware that Donald Trump has become the Republican nominee for president. The two former colleagues then banter back and forth regarding Trump's various misdeeds, with Stewart expressing relentless disbelief that the notorious businessman is poised to potentially become president. Watch the full skit here.

On Monday, a group of states—led by Texas senators—attempted to force a roll call vote on the rules of the convention. Had they succeeded (they didn't), any change in rules still wouldn't have managed to call Trump's nomination into question, but the effort served as a signal to the party, and to the rest of the world, that not all Republicans are backing Trump.

During an MSNBC panel held at the convention Monday, Congressman Steve King made remarks that have since sparked controversy. "This whole white-people business does get a little tired," he said. "I'd ask you to go back through history and figure out, Where have these contributions been made by these other categories of people that you're talking about? Where did any other subgroup of people contribute more to civilization?" Host Chris Hayes asked for clarification, saying, "Than white people?" King responded by adding, "Than—than Western civilization itself, that's rooted in western Europe, eastern Europe and the United States of America, and every place where the footprint of Christianity settled the world. That’s all of Western civilization."

Donald Trump's son, Donald Trump Jr., cast the votes on behalf of the New York delegation, which took the presidential nominee to 1,237 delegates, or enough to officially win the nomination. Surrounded by Trump's other eldest children—Eric, Ivanka and Tiffany—Donald Trump Jr. then congratulated his dad before going on to say, "We love you." Donald Trump, who is presently in New York, tweeted his excitement over the momentous occasion.

Ted Cruz finally managed to do what he and other Republican candidates failed to do throughout the primaries—he stole the show from Trump. Speaking to the convention in rousing rhetoric, Cruz made no mention of an endorsement of the Republican nominee, instead vaguely urging viewers to "vote their conscience." Delegates present became so frustrated by his refusal to officially give Trump the thumbs up that they began to chant, "We want Trump!" in the middle of Cruz's speech. The next day, Cruz defended his controversial decision by asserting that he is not in the habit of supporting people who have made personal attacks on his family.

Trump's running mate, Mike Pence, took to the stage after Cruz, and his optimistic speech lifted the collective spirit of the party, which had been notably dampened by Cruz's obvious disdain for Trump. Pence touched on the pain of the Middle Class, the fact that Trump is a political outsider (as a positive), and even made a joke, saying, "To those of you who don't know me, which is most of you..." Convention attendees rose to their feet in a standing ovation when the speech was done, and Donald Trump was so proud he kissed Pence... kind of.

Trump's daughter Ivanka introduced the presidential candidate—while wearing a $138 sheath dress from her own collection—with a strong speech that included remarks aimed at the female demographic. "As President, my father will change the labor laws that were put into place at a time when women were not a significant portion of the workforce. And he will focus on making quality childcare affordable and accessible for all," she said. Then, Trump took to the podium to give a speech that largely positioned him as the "tough on crime" candidate. "Together, we will lead our party back to the White House, and we will lead our country back to safety, prosperity, and peace. We will be a country of generosity and warmth. But we will also be a country of law and order." You can read his speech in its entirety (with fact-checking) here.