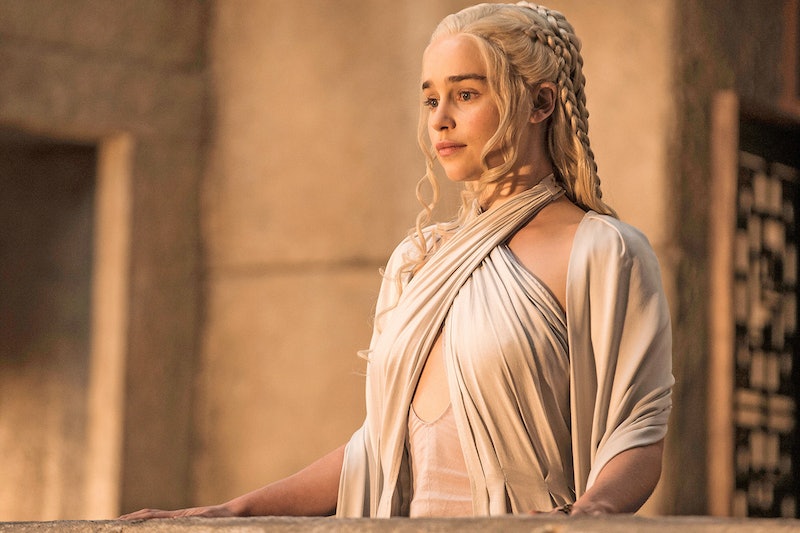 If you’re anything like us, you can’t remember what you did last week, let alone what happened on Game of Thrones a year ago. Or maybe you don’t watch Game of Thrones and don’t have time to binge-watch all five existing seasons before Sunday, but want to participate in viewing parties and/or water cooler talk this year (since it’s all anyone is going to care about for the next few months unless, of course, O.J. escapes prison and engages in another Bronco-enabled escape attempt). To aid you in either endeavor, we’ve created a cheatsheet to the show, highlighting the characters you need to know, and where we last left them. Since we can’t possibly include every character or debrief you on the meaning of every Game of Thrones-specific term the show has birthed, this list is by no means comprehensive; however it should allow you to pass for a fan in a pinch or keep you from being terribly lost this Sunday, when season six premieres. Warning: if you haven’t seen Season five, spoiler alerts abound.

Who She Is: Khaleesi is the youngest daughter of the "Mad King," and she is the last remaining member of House Targaryen (the family that used to rule something called The Iron Throne). Somewhere along the way, she picked up a couple of dragons, which is why she is referred to as "Mother of Dragons." She's pretty much the coolest character in the show and the most sartorially significant, especially when it comes to her always-amazing braid situation; learn more about her here and check out some of her most badass moments here.

Where We Left Her: At the end of season five, Khaleesi escaped a dangerous assault on the back of one of her dragons. The dragon then refused to carry her back to her pyramid palace, so she had to walk. En route, she was again attacked, and her fate in the aftermath remains uncertain.

Who She Is: Lord Eddard Stark's daughter. At this point, her whole family has been killed, save for one sister. Learn more (a lot more) here, and see some of her strongest moments here.

Where We Left Her: Arya spent season five training with a band of assassins called The Faceless Men. She was punished by the organization for committing an unplanned murder while avenging her family, however, and is now blind as a result.

Who She Is: Arya's older sister. Some consider Sansa to be the strongest character on the show. Learn more here.

Where We Left Her: Running from her rapist, murderer husband, the evil Ramsay Bolton (who The New York Times called "the most hated man on TV"). She only married Ramsay in the first place in order to eventually exact revenge on the Bolton family.

Who He Is: A fan favorite, Jon Snow is Lord Eddard Stark's illegitimate son. For a more in-depth debriefing, go here.

Where We Left Him: He's dead. Allegedly. Many fans believe he'll be resurrected in the sixth season as there are a few different ways in which characters can come back to life in the Game of Thrones world. TBD.

Who She Is: Cersei is the politically ambitious mother of a king, and one of the show's most scandalous villains. Here are seventeen times she was absolutely ruthless.

Where We Left Her: At the end of season five, Cersei was stripped naked, her head was shaved, and she was forced to do a walk of shame after being convicted of incest. Her fate in season six also remains uncertain.

Who He Is: Cersei's brother. Tyrion is usually the smartest person in the room. Check out twenty of his snarkiest comments here.

Where We Left Him: Tyrion killed his father after discovering that his dad was having an affair with his girlfriend. He was then set to be executed but was able to escape, after which he went to the aid of Khaleesi. When she fled in the midst of an attack, Tyrion, who survived the attack, agreed to stay on and help keep the peace until Khaleesi's return.