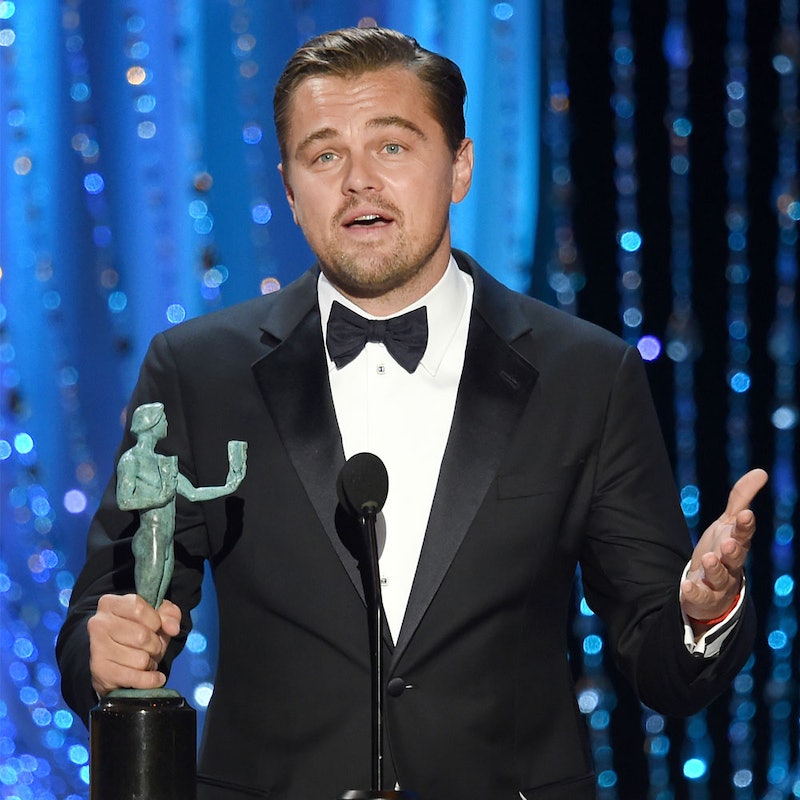 Oh, 2016, you were one of a kind. From high-profile deaths to political turmoil, this year has had its ups and downs, certainly going down as one of the wildest in the new millennium. Now that we’re approaching 2017, it’s only fitting that we revisit the people, events and trends that made headlines throughout the year. Here, a list of the most memorable pop culture moments in the last 365 days.

After 27 years on the big screen and six nominations (oh, and ingesting bison liver), Leonardo DiCaprio finally won the Oscar for his performance as Hugh Glass in The Revenant. It's been a long time coming.

After a child fell into his enclosure, the 17-year-old gorilla was shot by a Cincinnati Zoo worker, and the Internet blew up with viral memes that paid tribute to Harambe's life. It's been six months, but the Twitter and Instagram memes live on.

When Donald Trump called her "crooked" after receiving President Barack Obama's endorsement, Hillary Clinton had only three words for him: "Delete your account." Her comeback has since been retweeted more than 556,ooo times. Anyone else hear the schoolyard taunts of "Ooooohhh"?

It's a summer fling that sparked a worldwide love affair. People gathered at national landmarks like Times Square and Venice Beach, waving around their smartphones in search for the virtual creatures of Pokémon Go despite the heat wave that swept the country. Talk about dedication.

Breaker of the Internet and Protector of the Receipts, Kim Kardashian (a.k.a. Queen of Social Media) posted on Snapchat the "Famous" conversation between Kanye West and Taylor Swift, proving that the pop star in fact knew about her mention in Ye's controversial lyric. Fittingly, Twitter threw a #KimExposedTaylorParty. (Taylor wasn't invited.)

From Prince and David Bowie to Muhammad Ali, this was the year of celebrity deaths. We mourned the losses of rapper Phife Dawg, writer Harper Lee and actor Gene Wilder, among other notable artists. 2016, we've had enough.

After the MTV Video Music Awards, all anyone could talk about was Teyana Taylor's insane body. The singer appeared in Kanye West's "Fade" just eight months after giving birth to her baby girl, revealing unbelievably toned abs and workout-inspired dance moves that had us questioning everything we know about getting in shape.

The reality star suffered everyone's worst nightmare when she was tied up and held at gunpoint in Paris early last month, causing a palpable social media absence and minimal public appearances. We have yet to find out if Kim has any plans to return to the spotlight.

The mannequin challenge, a viral trend in which people remain frozen to the tune of Rae Sremmurd's hit "Black Beatles," has captivated everyone from Hillary Clinton and FLOTUS Michelle Obama to Adele and Destiny's Child.

In the third presidential debate, Donald Trump interrupted Hillary Clinton, muttering into his microphone that she was "such a nasty woman." The phrase has since been used as a badge of pride for women everywhere, inspiring a collection of #NastyWoman merchandise and the domain name NastyWomenGetShitDone.com, which redirected to Hillz's website.

If anything positive came out of 2016, it was the much-anticipated reunion of Gilmore Girls on Netflix, just in time for a holiday binge. We've already dug up our "Jess v. Dean v. Logan" sweatshirts.