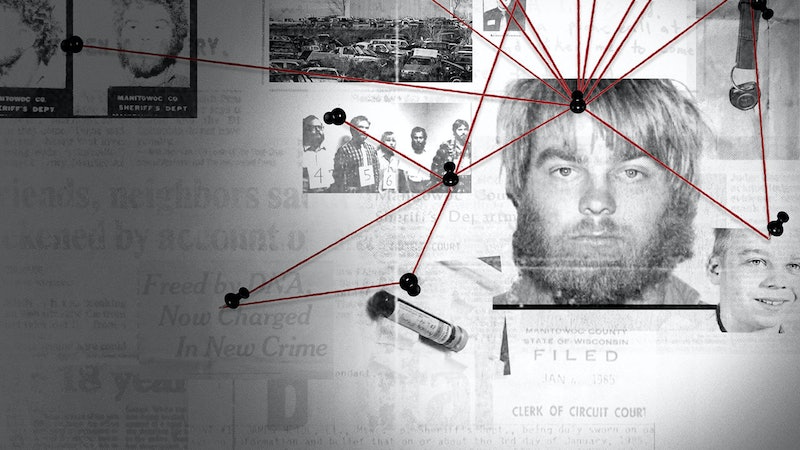 We don’t know about you, but our obsession with true crime stories has become so insatiable that we’ll spend hours (days, even) binge-watching Snapped when all other macabre avenues have been exhausted. The recent launch of Serial’s new season has helped to calm our cravings, but not since The Jinx have we been as fascinated as we are by Netflix’s Making a Murderer.

Filmmakers Laura Ricciardi and Moira Demos spent a decade investigating the strange case of Steven Avery, a maybe-murderer, for the 10-part documentary series. Avery was convicted of rape in 1985 but exonerated by DNA evidence eighteen years later. Not long after his release from prison, however, a young woman went missing after meeting with Avery, and her body, along with other damning evidence, was eventually recovered on his property. If that weren’t enough to convict him, Avery’s nephew, Brendan Dassey, confessed to helping his uncle rape and kill the victim.

What seems like an open-and-shut case might be anything but. The series poses many questions, not the least of which is whether or not Avery and his nephew, both men of limited means with IQs on the low end of average, were exploited and possibly even framed by a broken system that Avery happened to be suing at the time. It’s such a compelling case that Internet theories abound and new twists continue to surface (just yesterday, Avery dropped a major bombshell on the press), all of which we suggest you explore only after you’ve completed your binge. We apologize in advance for the sleep you’re likely to lose in doing so.

Oh, and since you’re likely to feel there’s a giant hole in your life once you’ve finished all 10 episodes, here’s a shortlist of podcasts and documentaries to fill the void:

Criminal : This monthly podcast is a lot like Serial; episodes revolve around complicated crimes with murky outcomes, much like the Avery case.

Sword and Scale : This is not lighthearted fun, so listener beware. Sword and Scale explores unsolved murders, missing persons cases and high-profile trials and can be quite graphic and grisly at times.

The Jinx: If you haven’t yet watched this chilling, truth-is-stranger-than-fiction documentary about alleged serial killer Robert Durst, you’ll find it a more than adequate fix for your Making a Murderer addiction.

Dear Zachary: This one is a real heartbreaker, with a twist at the end to rival that of The Jinx. Refrain from reading anything about this documentary before you watch it for the full and intensely emotional effect.

West of Memphis: The subject here is eerily similar to that of Making a Murderer. This doc revolves around the case of 3 heavy-metal-loving Arkansas teens who were convicted of murdering 3 young boys at the height of the Satanic Panic. It also involves the potentially coerced confession of someone with a low IQ. Paradise Lost: The Child Murders at Robin Hood Hill covers the same territory and is also worth a watch.

The Imposter: This story of a missing Texas boy who resurfaces in Spain years later is almost too crazy to be true.

A Murder in the Park: This film covers the case of Anthony Parker. Due to the work of an investigative journalism class, he was released from death row just hours before he was set to be executed. However, that’s not the happy ending to this story but rather the beginning of its tragic trajectory.

There’s Something Wrong with Aunt Diane: What would cause a seemingly normal suburban mom to veer head-on into traffic, killing herself, her children and three of her nieces? That’s the question at the center of this heartbreaking documentary.

Crazy Love: Be patient and this one pays off. It’s a love story with a twist that will make you (hopefully!) immensely grateful for your partner.