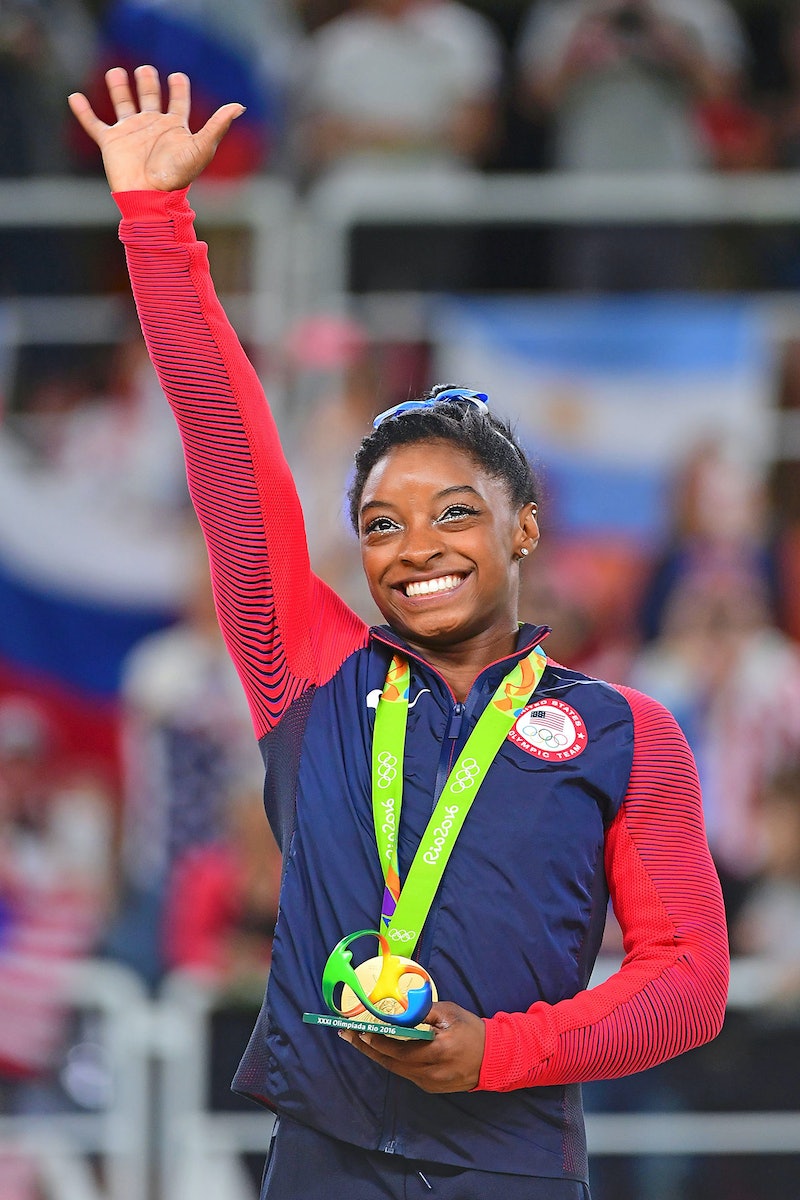 If you don’t get chills at some point during the Olympics, you may want to talk to a professional. Everything about the competition is geared toward giving us all the feels, and this year’s Rio games are no exception. In our opinion, every single human to throw their hat in the ring for a medal is a hero, and each and every one is inspiring to watch, cheer on and celebrate in victory; however, there are some especially inspiring women competing at Rio 2016, the year in which the US brought more female athletes than ever before. There are so many Olympic and Paralympic heroines to choose from, but here are some of our favorites.

We still cry whenever we so much as think about Yusra's story. Last summer, the teenager fled the Syrian War and found herself on a dinghy with 19 other people in the Mediterranean Sea. When the boat broke down, she swam for three hours to lead the boat to safety. She is a member of the first-ever Refugee Olympic Team, and though she placed seventh in her heat and therefore won't move on to the semi-finals, she says she plans to continue swimming and supporting refugees. We hope to see much, much more of the young IRL superhero! She's not alone, either. To really get a good cry in, watch this video on her fellow refugee competitors.

She is 41 years old, or to put this into context, the age of the parents of many of her competitors—Oksana won her first Olympic medal before Simone Biles was even born. This is the Chusovitina's seventh Olympics, and she even switched teams and competed on behalf of Germany at one point because she wanted to thank the country for treating her son, who was sick with leukemia. Everything about her makes us equal parts ashamed of the amount of time we spend watching Netflix, proud to be a woman and inspired to stop making excuses for ourselves, especially when it comes to age.

We wish age didn't have to be such a notable factor when it comes to the games, but it is, and these women deserve credit upon credit because of it. Kerri, at 37 years old, is nearly two decades older than some of her competitors. The returning US Olympian also has three children and notably competed in the 2012 Olympics (and won) while pregnant. She received some flack recently from feminists for saying in an interview that she was "born to make babies and play volleyball" and that having kids made her a better athlete. Hopefully she's shaking off the haters, as all we see when we look at her is an insane amount of inspiration around what motherhood can look like (spoiler alert: It has a six-pack).

Never have we needed this woman more than we do right now. At 30, she is one of the oldest fencers to compete and is also the first American woman to wear a hijab at the games. In advance of the competition, Ibtihaj said, "I feel like this is a great moment for Team USA to be even more diverse than we have in the past and I'm just looking forward to representing myself, my community and my country." Because of her, perhaps one day the participation of an observant Muslim on behalf of the US won't even be a thing of note. For now, however, it most certainly is.

This is 40-year-old marathoner Olivera's fifth Olympics. The Chilean also has—wait for it—five children. She wants to go into politics when she retires from competing, and recently made headlines for coming forward as a survivor of sexual abuse.

Sarah's story is pretty crazy. In 2012, Saudi Arabia began to feel the heat as the last country in the world to refuse to send female athletes to the games. So, it tapped Attar to compete, even though she hadn't technically qualified, because she held dual citizenship with Saudi Arabia and America. Her westernized image was revamped, and she competed for her father's home country. Though she came in last, she received a standing ovation. She will run the marathon in this year's games, once more on behalf of Saudi Arabia.

Rafaela is, at present, the pride of Brazil, having won the country's first gold medal. The judoka (someone who practices judo) hails from one of Brazil's poorest and most dangerous slums and credits the sport for turning her life around. Victory must feel especially sweet, as in the aftermath of being disqualified in 2012 for an illegal hold, she fell victim to racial abuse on social media and elsewhere. She was so disgusted and appalled that she almost left the sport, but much to the chagrin of her detractors, she decided to push through to victory.

Nineteen-year-old Italian wheelchair fencer Beatrice lost both of her legs and her arms from the forearm due to a meningitis infection in 2008. After rehabilitating for three months—which is as long as it takes us to make it through one Pop Physique class without quitting an exercise—"Bebe" went back to the sport she loved. She is the top-ranked fencer in her Paralympic category.

The US Women's Soccer Team

As of yet, they are undefeated at this year's games, however their fight for equal pay continues stateside. In March, team superstars Carli Lloyd, Becky Sauerbrunn, Alex Morgan, Megan Rapinoe and Hope Solo filed a complaint with the Equal Employment Opportunity Commission stating that the US Soccer Federation pays them nearly four times less than their male counterparts. (The math on this is crazy—read here for more details.) The women's team has ranked number one for 12 of the last 13 years, perhaps in part because they basically don't get paid at all if they lose. The Federation has fired back, stating that pay is fair and that if any disparity exists it's due to the fact that the men bring in more revenue. Join their fight with #EqualPayEqualPlay.

Terezinha was born with a degenerative disease that causes gradual vision impairment, but blindness hasn't slowed her down. The 37-year-old Paralympian first had to overcome poverty in order to compete—running shoes were too expensive for the Brazilian native—and then the slow loss of her eyesight. In 2012, however, she won two gold medals at the Paralympic games and is in the Guinness Book of World Records as the fastest blind woman in the world. Again, our own excuses for not achieving are starting to feel pretty weak....

The US Gymnastics Team

Because our bodies could never do what theirs do, because they won the gold (!!!) and because Simone Biles is now flirting with Zac Efron on Twitter.

All Of The Women's Rugby Sevens Players

2016 marks the first time women's rugby sevens players were allowed to compete in the Olympics. Repping another marginalized group—there are around 45 out LGBTQ competitors this year—Brazilian player Isadora Cerullo received a marriage proposal from her girlfriend while still on the field post-match.

This woman is our new personal Beyoncé. The nine-time world champion has won two gold medals and a silver for the US in the games so far, and she just seems like a boss while doing it. "People always ask, ‘Don’t you feel the pressure?'" she told Vogue back in March. "And I really don't feel it. I've just always set goals. When I was a kid, I would write them down, and I would work toward them, and that's still pretty much what I do. In 2013, I sat down with my coach, and my goals are set through 2016, though since then a few things have been added." After commentators claimed that Katie "swims like a man," Twitter jumped to her defense.

Iranian Zahra Nemati always knew she wanted to compete in the Olympics, and her chosen sport as a child was Tae Kwon Do. At age 18, however, she was hit by a car and her spine shattered. Thirteen years later, she now competes in archery. In 2012, she won a gold at the Paralympics—the first Iranian woman to do so—but this year, Zahra is competing in both the Paralympics and the Olympics. "I get embarrassed because Zahra is always training even when her able-bodied teammates are tired," an Olympic teammate said. "She really encourages us."