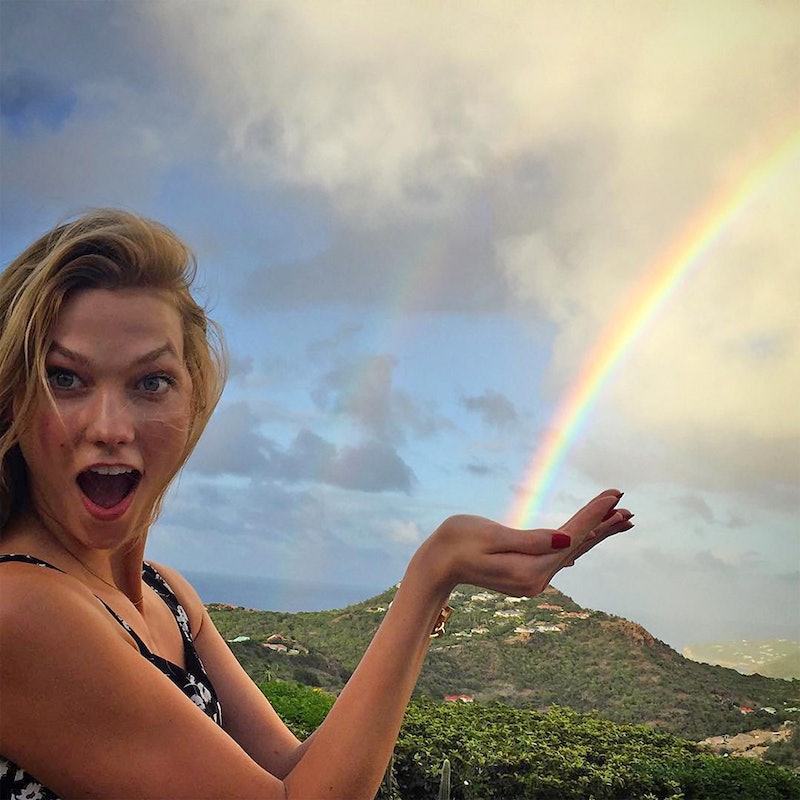 The concept of luck is so comforting: It takes the idea that most events occurring in our lives are random and gives them some order, albeit largely still outside of our control. If bad things happen, you’re unlucky, but you shouldn’t despair as your luck can turn around at any moment, especially with the help of a good luck charm. With St. Patrick’s Day upon us—a day of shamrocks, pinching and the luck o’ the Irish—we thought we’d explore some of the more random ways the superstitious among us can bring luck into our lives. Here are seven surprising things purported to bring you good fortune.

For myriad reasons, seven seems to be our favorite number, and it's considered lucky and magical in both Eastern and Western cultures. Think about it: There are seven wonders of the world, seven days in the week, seven continents (popularly if not technically), seven colors in the rainbow, and seven deadly sins. Plus, slot machines tend to favor sevens for big payouts, Snow White had seven dwarves, and on and on the list goes.

Scientists now know that our brains are best able to store information in groupings of seven, so if you want to memorize a list of any sort, divide it into groupings of seven. This may be part of the reason we subconsciously favor the number so unanimously, but it doesn't come close to explaining why nature does (which is part of the number's magic).

Ladybugs, which are really just stylishly outfitted beetles, are the rare good luck symbol in that they're pretty universally seen as a sign of good fortune across different cultures and geographical areas. This is likely due to the fact that ladybugs protect crops from harmful pests, which would have made their appearance fortuitous in agricultural societies. Today, many people view ladybugs as a sign of various types of good luck and believe the sight of a ladybug can bring about financial windfalls, love, good weather and a host of other positive events. It's supposed to be particularly lucky if a ladybug lands on you, and the number of spots the visiting bug has on its back is sometimes said to represent the number of children you'll have. (Some ladybugs have up to 24 spots, however, so we're not sure this should always be considered a good thing.)

According to palmistry and old wives' tales, an itchy right hand is a sign that money is coming your way. On the other hand (pun intended!), an itchy left palm is a sign that money is about to leave you. The best way to remember this important distinction is through the refrain "right receiving, left is leaving." Meanwhile, if both of your palms itch, it generally signifies an impending windfall—guess we'll stop applying our hand creams so liberally.

A Spider On Your Wedding Dress

We'd prefer to take our chances on bad luck with respect to this one, but according to English lore, finding a spider on your wedding dress is a sign of good things to come.

The Folds In Your Skirt

According to the Oxford Dictionary of Superstitions, it was at one time believed that if a woman's skirt folded up so as to form a pocket-like shape, she would end up with a new dress. We're willing to believe this one, as getting an accidental fold in your garment seems like a much easier means of acquiring a new item than actually working to pay for it.

Crickets are a lot like ladybugs in that they're considered lucky in many different cultures. The Chinese in particular believe crickets to be a sign of luck and have historically kept them in their homes so as to be able to better hear their "song." (As an aside, the Chinese fascination with crickets—there was even a "Cricket Minister" in the 1200s—led to the popular Chinese sport of cricket fighting, which we didn't know was a thing but by which we are now sort of fascinated.) In parts of Brazil, the chirping of a cricket can signal an impending windfall. It's generally considered bad luck to kill a cricket; in researching this story, we found a great response to this belief: "It’s certainly bad luck for the cricket." Touché.

The consensus is a bit mixed on this one. Some see spilling wine as a way of rectifying the bad luck you attract by spilling salt. This likely dates back to times in which salt was more valuable than wine or, as we like to refer to this time period, "the dark ages." Others say that spilling wine on a new outfit or squeaky clean tablecloth, specifically, is where the good luck comes in, though some Italians believe you must dab the wine behind your ears after it spills if you don't want bad luck.

Our stance on this one? Spilled wine is never a good thing unless, of course, you've just accidentally dumped it all over your favorite outfit or white couch—in which case we believe it's perfectly acceptable to be as superstitious as needed in order to feel better about the results of your debauchery.