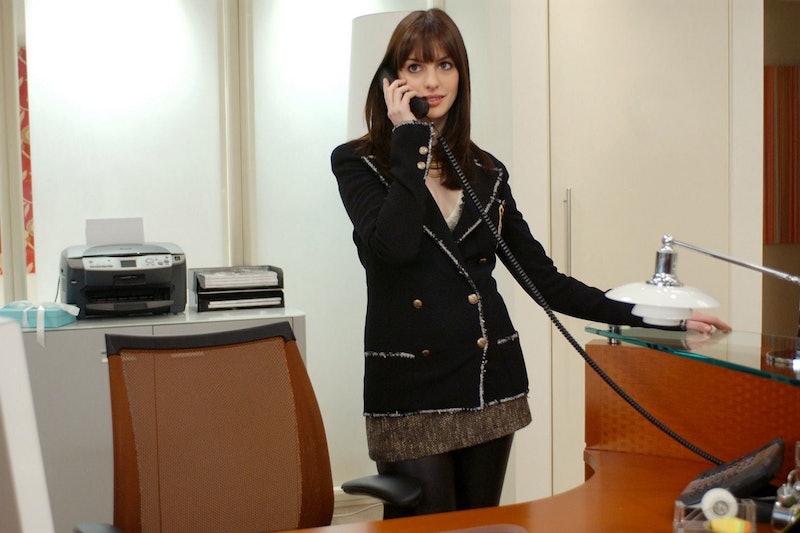 If you can believe it, The Devil Wears Prada turns 10-years-old today, which is odd given the fact that we are still the same age we were when it was first released (wink, wink). Despite the film’s fashion bent, which afforded it some of the most epic one-liners of all time, The Devil Wears Prada actually serves as a great crash course in the real world for those about to start out in any industry. Here, five reasons every girl in her twenties should see it, stat.

Lesson #1: You Are Probably Irrationally Arrogant

As a result of our rah-rah American upbringings, most of us graduate into the real world believing we are the smartest, most special humans to ever enter the work force. As such, we sometimes think that we deserve to start at the top or, at the very least, that we can skip the most unpleasant bottom rungs of the career ladder. This is simply not the case. We need the humbling experience that comes from "fetching coffee" for our bosses, and the scene in which Miranda schools Andy on the origins of her "Casual Corner sweater" has happened in some iteration to all of us in the early days of our careers. These types of takedowns are a requisite step towards learning to respect the businesses we're entering and the hard work it took those at the top to earn their positions.

Lesson #2: Work-Life Balance Is a Precedent To Set Early

Modern careers are pretty all-consuming. Setting boundaries, not just with our bosses but with ourselves, is therefore a crucial early step in career development. If we don't have this conversation with ourselves at the start of our careers, and ask ourselves exactly what we prize most out of life, chances are we will find ourselves consistently struggling to find a work-life balance that, in most cases, doesn't exist. Andy learned this the hard way when Adrien Grenier's character walked out on her as a result of her workaholism.

Lesson #3: The Older Guy You Meet At Work Is Not Better Than Your First Love

We all make this mistake at some point. Though the charming older executive may have more money, better clothes and a more, ahem, evolved "bedroom strategy" than our young loves, he definitely does not turn out to be "the one."

Sure, they matter more in the fashion industry than they do in, say, accounting. That said, we stand by the advice that you should dress for the job you want, and if you think about it, appearances are really all anyone has to go on in the early stages of the hiring process. When every applicant has a college degree and an impressive resume of accomplishments, the way you present yourself can be a critical point of differentiation. In Andy's case, looking as though she didn't care about her appearance actually worked in her favor, but that was more so a story device than a reflection of what would actually happen in real life. Here, Rachel Zoe's advice on the best pieces to wear on your next interview.

Lesson #5: Florals For Spring Are Not Groundbreaking

If you want to get ahead at work, you need to take chances. Presenting your boss with the safe ideas he or she has already heard a million times is not going to do anything for your career. It's better to be laughed out of the board room for a crazy idea than it is to be forgotten for your boring and expected contribution. These days especially, established executives look to younger employees to bring fresh ideas to the table. Showing up instead with "florals for spring" will ensure you spend the bulk of your career languishing in middle management.