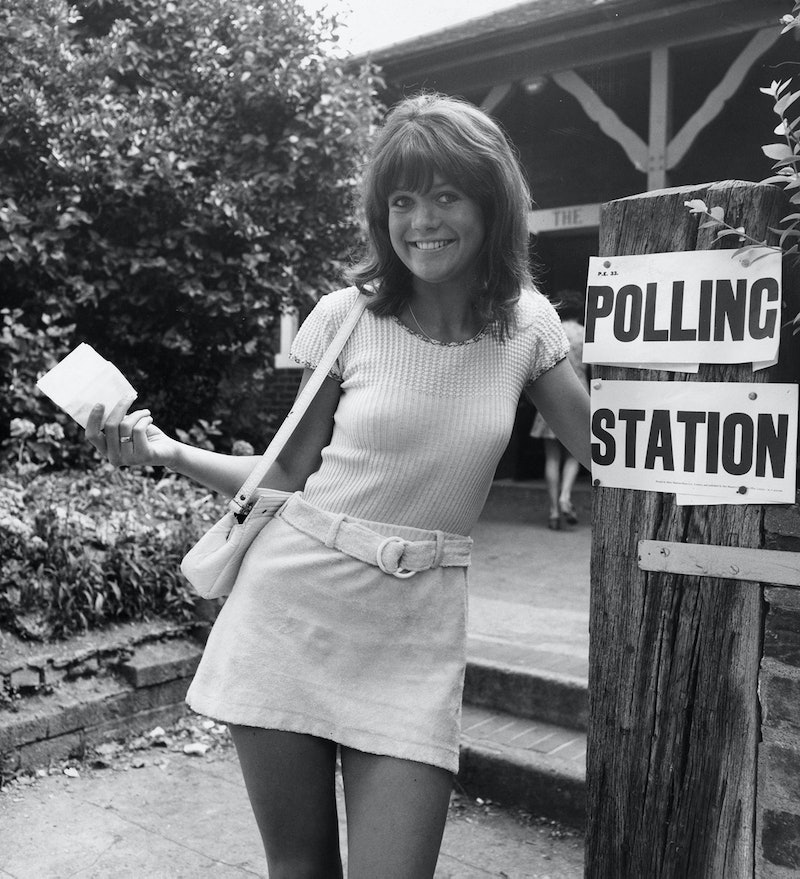 This year’s election season has been anything but boring. After everything that happened this week at the RNC, we couldn’t help but think that the Democratic National Convention would be quiet in comparison; however, so far, this has not at all been the case. Here, all the most notable moments from the 2016 DNC, updated as they happen.

The best fiction writers in the world couldn't imagine better drama than the happenings of this election cycle. In case you missed it, hackers—suspected to be Russian—leaked emails from the DNC which exposed the party's favoritism of Clinton as a candidate over Bernie Sanders. In the wake of the scandal, DNC chairwoman Debbie Wasserman Shultz announced her resignation and declined to gavel in the start of the convention as would be customary.

In an emotional speech, First Lady Michelle Obama spoke about her daughters, and how the results of this election would affect their lives forever. She touched on the fact that now, because of Hillary Clinton, her daughters, and girls all over the country, would take for granted that a woman could be President. Notably, she also called out the idea that the nation needs to be made "great again," as per Trump's campaign slogan, asserting that it is already the greatest nation in the world. After watching this speech, we wouldn't be surprised if Michelle Obama were the next former First Lady to run for President at some future date.

Adding another level of meaning to her DNC appearance Monday was the First Lady's blue silk crepe Christian Siriano dress. Siriano rose to fame on reality show "Project Runway" and is known for being inclusive of all shapes and sizes in his designs. Most recently, he stepped forward to create a dress for Ghostbusters star Leslie Jones after she took to Twitter to bemoan the fact that no one wanted to design for her six-foot frame. He's also collaborated with Plus Size store Lane Bryant. Mrs. Obama is known for supporting emerging designers, but this is only the second time she's worn Siriano—the first was earlier this month at the funeral for the officers killed in Dallas. It wouldn't be unlike her to subtly make a statement in this way, so we're guessing her choice of designer for this event—a man known for acceptance and celebration of all types—was no fluke.

Senator Elizabeth Warren—who Bernie Sanders said Sunday he'd prefer over Tim Kaine as candidate for VP—pulled no punches when it came to the Republican candidate and was met with raucous cheers from the convention floor in the process. She also dedicated a good portion of her speech to highlighting the ways in which Republicans have blocked legislation that would help working Americans, the manner in which Clinton's policies will help women, and how the Democratic party will work to unite America's diverse population.

Bernie Sanders made certain to mention Hillary Clinton's name fifteen times in his lengthy speech Monday night, but it may take more than that still to get his "revolutionaries" on board with the Democratic nominee. At one point, his campaign had to send messages to supporters on the DNC floor, pleading for them to cease booing other speakers. "Our job is to do two things -- to defeat Donald Trump and to elect Hillary Clinton," Sanders said. "It is easy to boo, but it is harder to look your kids in the face if we are living under a Trump presidency."

On July 26, Hillary Clinton officially became the first female major party presidential candidate in the history of the United States. Clinton's name was put into nomination Tuesday by another trailblazer, Maryland Senator Barbara Mikulski, who was the first woman elected to Senate who didn't follow her husband or father into the position. Also notable was the presence of 102-year-old delegate Jerry Emmett, who pledged votes for Clinton on behalf of the state of Arizona, and who was born before women had even secured the right to vote.

Former President Clinton to the stage to share the history of his relationship with Hillary, as well as focus on her achievements as a young lawyer, mother, advocate, and public servant. If Hillary wins, Bill Clinton will be the first man to hold the position of spouse to the president, a milestone which is even more notable given he once held the office himself. Hillary has said she will enlist the former president's help with the economy. "My husband, who I'm going to put in charge of revitalizing the economy," Clinton said in May. "You know he knows how to do it, especially in places like coal country and inner cities and other parts of our country that have really been left out."

As Virginia Senator Tim Kaine officially accepted the Democratic Party's nomination for Vice President, he spoke about the history of his work in the pubic sector. He also spoke about his son, who is serving in the military abroad, and how he trusts Hillary Clinton with his son's life. Finally, he talked about the Republican candidate, criticizing Trump's "Believe Me" strategy.

President Obama made a strong case for his former rival, calling Clinton more qualified to hold the office of president than anyone who has come before her (including himself and Bill Clinton), in large part due to her time as Secretary of State. He also defended the current state of America, saying, "A lot’s happened over the years. And while this nation has been tested by war and recession and all manner of challenge—I stand before you again tonight, after almost two terms as your President, to tell you I am even more optimistic about the future of America." Another quote is more likely to be buzzed about for days to come, however. At one point towards the end of his speech, Obama said, "The American dream is something no wall will ever contain." When he was finished speaking, Hillary appeared on stage, and the two embraced.

After an emotional speech by bereaved father Khizr Kahn—which, according to Wired, caused an uptick in Google searches for the phrase "register to vote"—and a touching introduction from her daughter Chelsea, Hillary Clinton took to the stage to formally accept her party's nomination. In the course of her speech, she thanked Bernie Sanders for rallying voters around social justice, and promised to take up his many causes. She also emphasized unity. As she spoke, her husband was shown to have tears in his eyes. You can read her entire speech here. Days after the convention wrapped, a rep for Ralph Lauren confirmed that Clinton's smart ivory pantsuit was courtesy of the designer.

Katy Perry performed versions of "Rise" and "Roar" for the crowd as doting boyfriend Orlando Bloom filmed, and even though we should've been focusing on politics, our hearts skipped a beat every time the camera panned over to catch him in the act. She later revealed to fans on Twitter that Bloom had helped her with her speech. "Both of my parents are pastors and staunch Republicans. I did not finish high school and, unfortunately, I don’t have a formal education, but I do have an open mind, and I have a voice," she said. "So I am asking you to have an open mind and to use your voice, because on Nov. 8, it will be just as powerful as any NRA lobbyist. You will have as much say as any billionaire."