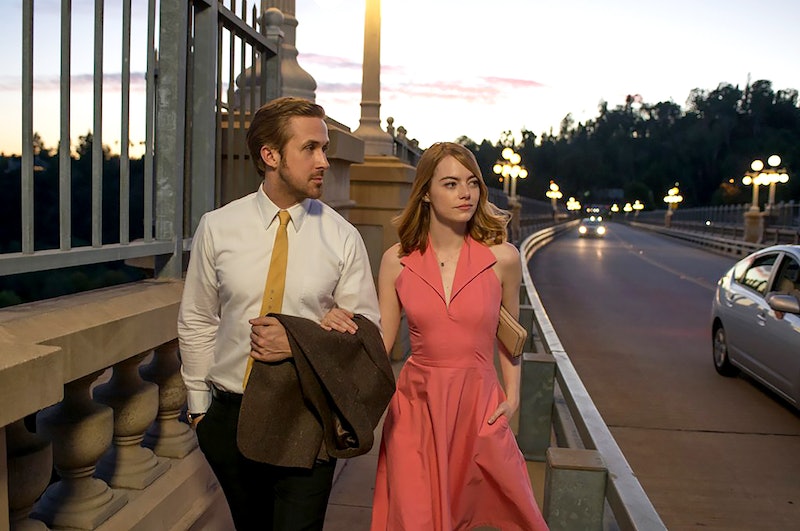 December is always a good month for movie theaters, and this year promises to be no exception. What is noteworthy, however, is the number of new feature films releasing this December which center around—or at least prominently feature—females. We could not be more excited for this batch of must-see movies which include incredible performances by women we love like Natalie Portman, Emma Stone, Kate McKinnon, Jennifer Aniston, Jennifer Lawrence, Elle Fanning, Greta Gerwig, Annette Bening and more. Here, five of the films we’ll be peeling ourselves of our couches for this month.

We saw an early screening of Jackie, and it was one of the most intense theatrical experiences we've had in quite some time. Prepare yourself for a relentlessly emotional film which is anything but what you are probably expecting it to be.

The only onscreen duo whose chemistry could possibly rival that of Ryan Gosling and Rachel McAdams is the pairing of Ryan Gosling and Emma Stone, and we're excited to see them reunite for this film. La La Land is bound to be an awards season darling (it garnered 12 Critics' Choice nominations this morning), and we are dying to see it.

You know a film is going to be good when the actress you're least excited to see in it is our beloved Jennifer Aniston. It's not that we're not into her, it's just that we're just so into Kate McKinnon (SNL) and Jillian Bell (Workaholics). These big tentpole comedies tend to be hit or miss, but there is almost no chance this one isn't hilarious (co-written by a woman, too!).

We have to admit that we didn't want to want to see this movie, as everything from the casting to the story line seems like a cheap ploy to get us to buy tickets. Then, we saw the trailer and decided we have to see this as soon as possible. Many are asking whether or not Chris Pratt and Jennifer Lawrence can carry a movie this big over Christmas, and we're betting on the answer being yes. Passengers promises to be the perfect combination of sexy, thrilling and heartbreaking. (It doesn't hurt that Chris Pratt is easy on the eyes, either.)

We saw an advanced screening of this film a couple of weeks ago, and we think it's well worth the price of admission. 20th Century Woman may center around the coming-of-age of a teenaged boy, but, as the film's title suggests, it's the women who steal the show here. Annette Bening will absolutely break your heart in this role and one scene—in which Greta Gerwig firmly cements her place in our hearts as as favorite indie actress du jour—still has us in stitches.