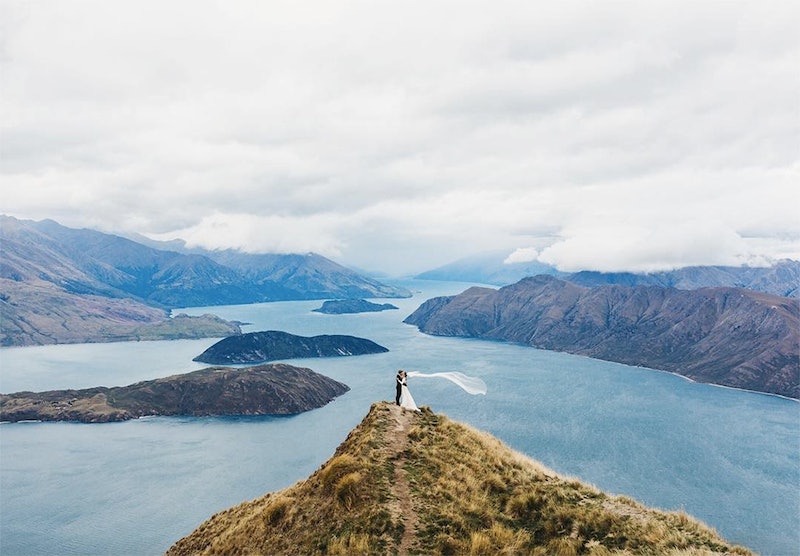 Don’t get us wrong—we love Vogue and we love weddings, but sometimes the marital festivities featured in the mag feel like reports from another planet. Given that this editor’s father spent her wedding fund (which she doubts ever actually existed) on a pool several years back, reading about the luxury nuptials of people with roman numerals in their names is simultaneously masochistic and cathartic. Looked at one way, the columns induce an envy in us even Instagram can’t replicate. However, they’re also often so over-the-top ridiculous, they’re laughable. Here, we examine some of the best and most swoon-worthy weddings featured in Vogue, and allow ourselves a few chuckles in the process.

The location: A biodynamic vineyard located, literally, end of the earth. We're pretty sure their guests traveling from NY actually lost a day of their lives.

The photography: On the bluff of a mountain overlooking Lake Wanaka, naturally. It only took 4 helicopters to ferry the bridal party back and forth during the reception.

"Inside An Elegant Wedding At A 12th-Century Castle In France"

The meet-cute: "We met at the gym in New York City when Donovan accidentally mistook me for my twin sister, whom he knew," explains Olivia.

Don't worry, this charming anecdote doesn't lead to where you think it does—this is Vogue, after all.

The ring: "He even had my sister try on rings to confirm my ring size."

This poor sibling is probably going to star in the next installment of Making a Murderer.

The flowers: "She carried a bouquet of white calla lilies—a nod to the calla lily arrangement Donovan sent her the morning after their first date."

Men do this?! WTF, every guy we've ever gone out with!

The venue: "The newlyweds then hopped in a black Bentley and made their way to the small town of Cernay-la-Ville and the Abbaye des Vaux de Cernay, or 'The Abbey,' a venue Olivia and Donovan discovered after flying to Paris one weekend and checking out six or seven locations."

"Anchors Away: A Sailor Races To Bermuda To Marry His Bride"

The engagement: "We were concluding our walk on the causeway when Dave asked if I wanted to sit and enjoy the view of the Chesapeake in a small area under the yacht club’s flagpole."

Kudos for any time you can fit the word "yacht" into your engagement story.

The fashion: "The men wore navy-blue Vineyard Vines ties with the burgee of the Gibson Island Yacht Squadron on them with white shirts, khakis, and docksiders—a quintessentially nautical look."

Do you know what a burgee is? We didn't, but then again, we don't get as much recreational boating in as we should.

The reception: "The new Mr. and Mrs. Baker then traveled by sailboat to the reception venue, a nearly 350-year-old restaurant called the Waterlot Inn."

"Paradise Found: A Wedding at a Lavish Home in San Miguel de Allende"

The ruse: "I knew that I wanted to propose by the lighthouse on Brant Point, but I also knew that it would be a challenge to get Georgie out of bed and over there early enough in the morning before the crowds of dog-walkers and fisherman, so fabricating a plan of scalloping worked well. The next morning, we made the short walk over toward Brant Point to go ‘scalloping.’ Georgie, who self-admittedly is not much of a morning person, was too tired to really understand what was going on. Scallops, in October, shortly after sunrise? Sure!"

Winner, most creative use of seafood in a matrimonial context.

The props: "The dress also had to be comfortable enough to wear while walking through cobblestone streets with a donkey!”

The party: "Sunday is a popular day in El Jardín, and as the parade made its way to the main square, a large group of people started to gather around the wedding party. As the crowd continued to grow, a dance party broke out in the middle of the square."

"Grandeur and Style Prevailed at Amber Guinness’s Wedding in Florence"

The decor: "From the invitations, which she designed and drew by hand, to the 10-feet-high trees, cut from the estate at Arniano and used to decorate the church, she was the mastermind behind it all."

Nothing denotes restraint quite like deforesting on behalf of your special day.

The reviews: "Another guest said the whole event ‘managed to combine grandeur with style and informality in perfect measure.'"

This is definitely fake news. Do your friends talk like this?

"Under the Tuscan Sun: An Intimate Wedding at Castello di Casole"

The groom: "Once we were back in the room, drinking and listening to music, Michael gave me a book he had created filled with photos and captions from all our years together. The first page of the book had a picture from when he asked me to prom—he had drawn with paint on his parents’ car, ‘Will you go to prom with me?’ The pages following included high school and college memories, trips we had taken together and time spent between New York, Washington, D.C. and Chicago. The last page of the book had the exact same picture from prom, but the words on the car now said ‘Will you marry me?’"

We're crying too hard to say anything snarky about this one, except that our high school boyfriends are still following Phish around, so... same.