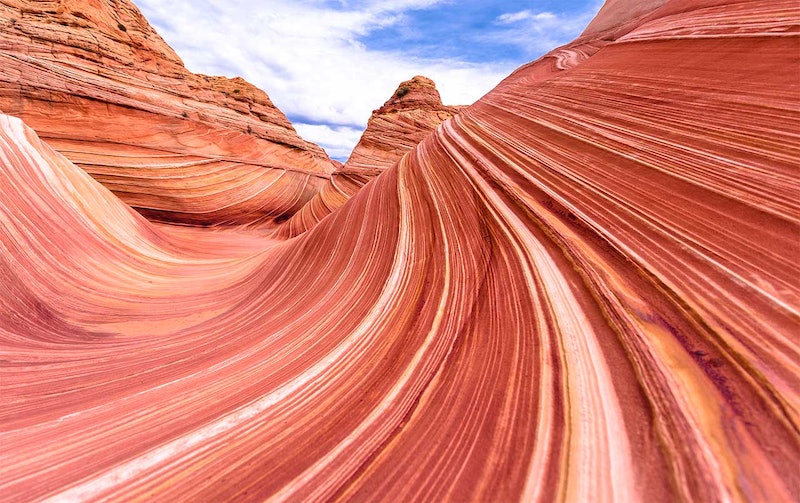 If you don’t have Instagram-worthy plans this weekend, fear not. You don’t have to travel far to find a good photo opp as there are hidden (and not-so-hidden) gems scattered across the U.S. Here, 18 of the coolest places to take pics that may well be within a short driving distance of your hometown, so you can induce Insta envy without having to brave holiday TSA lines.

This incredible sandstone rock formation needs no caption to accompany it, but it won't hurt to tell the story of how you acquired your Instagram photo at The Wave, as it's not easy. The area is delicate, so only ten next-day permits are released each day, and only ten additional permits are released per day online for trips books four months in advance. Additionally, finding The Wave requires quite the hike—you'll only receive a map if you've acquired a permit, there are no formal signs, and the shortest path is 6 miles roundtrip and entails a climb of 350 feet in altitude.

Early spring is the best time for blooms, and the Skagit Valley Tulip festival takes place in April; however, you can still frolic through fields of tulips and daffodils throughout the summer using this bloom map as your guide. If you do manage to make it during peak season, don't miss the opportunity to photograph yourself running through the designated "kite field" for maximum Insta-acclaim.

This "visionary environment" near the Salton Sea was created (using lead-free paint) by local resident Leonard Knight, who died in 2014. The future of the site remains uncertain as it requires constant upkeep due to the harsh environment in which it's located, so we suggest you visit ASAP.

This park is about 68 miles west of Key West and preserves Fort Jefferson and the seven Dry Tortugas islands. We suggest booking a seaplane tour to get the million dollar aerial shot, but other photo opps in the area include an abundance of coral reefs and some shipwrecks (just be sure to bring an underwater camera).

This Sierra Nevada gold town dates back to the late 1870s, and it became a historic landmark in 1962. Back in its heyday, Bodie boasted saloons, a red light district, and possibly even opium dens. It's located near Lake Tahoe. Other notable ghost towns in the US include Rhyolite in Nevada, Calico in California, Virginia City in Montana and Terlingua in Texas.

This museum, located on 10 acres of open land near Joshua Tree, CA, consists of over 100 Instagram-worthy works of art by the late artist Noah Purifoy.

The Haʻikū Stairs—a hiking trail totaling 3,922 steps—are also known as the "Stairway to Heaven." It's located in Oʻahu, Hawaii along Oahu's Ko'olau mountain range. Technically, it's illegal to hike The Haiku Stairs, and increasingly dangerous, so partake of this one at your own risk.

There's a reason The Neon Museum is frequently booked by professional and wedding photographers, who have to pay a fee to shoot in front of its "Boneyard." Personal photography is permitted free of charge, however; day and night shots are equally picturesque.

This beauty is the largest hot spring in the U.S., and the third largest in the world. It's located inside of Yellowstone Park, and for an in-depth look at the science behind its unique coloring, read this.

The Mendenhall Glacier is a 12-mile glacier south of Juneau, and the caves can only be reached following a Kayak jaunt and an ice climb, so your Instagram followers should be particularly impressed.

This natural wonder is a part of the Navajo Nation. When visiting, it might be wise to bring along someone well versed in the art of photography, as it can be difficult to get a good picture due to the wide exposure range made from the light that reflects off the canyon walls.

There's no end to our collective nostalgia, and any picture taken at this museum of vintage gas pumps, signage, and the like is sure to be a crowd-pleaser.

This park was created to protect its namesake, the giant saguaro cactus. Joshua Tree National Park offers a similar experience in California.

This likes-baiting Instagram opp is also known Hawksbill Crag, and lots of proposals are staged here. As an added bonus, the hike to get the photo is also a wimp-friendly 3 miles R/T.

The hoodoos—or rock spires—are what give Bryce Canyon its picturesque quality. The park has 8 marked day hikes and 2 night hikes, the latter of which will allow you to enjoy the 7500 stars you'll be able to see with your naked eye given that the park's sky is one of the darkest in North America.

The terrain is picturesque in and of itself, but you'll get extra points (or, likes) for any photo involving one of the native bison herds, which you can view from the Sage Creek Rim Road.

No Instagram bucket list is complete without a photo in front of the General Sherman Tree, one of the largest trees on the planet. It's located in Giant Forest, where five of the world's ten largest trees have their roots.

The "Saved By The Bell" Pop-Up, Chicago

'90s nostalgia will reach its peak with the opening of this replica of Saved By The Bell's famed hangout The Max. Called Saved-By-The-Max, the restaurant opens June 1 for a 3-month run in Chicago's hipster haven Wicker Park. As this is a limited-time-only opportunity, we're guessing Saved-By-The-Max will be one of the most Instagrammed venues of the summer.