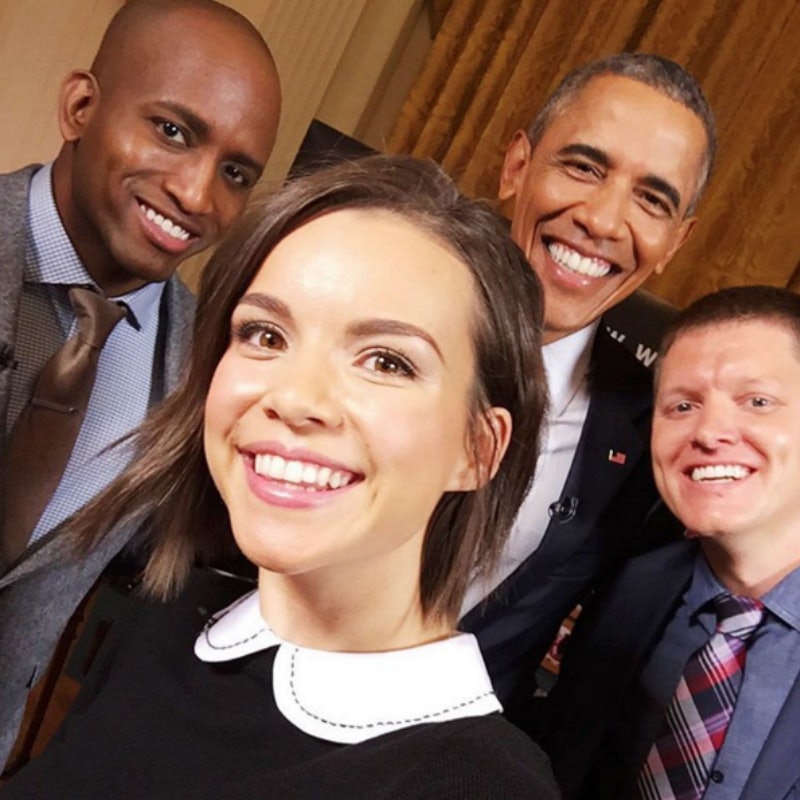 President Obama admits he was unaware of a sales tax on tampons, a second season of Making a Murderer may happen and more of today’s news.

In an interview with YouTube star Ingrid Nilsen, President Obama admitted he was unaware of the sales tax that 40 states charge on feminine hygiene products deeming them "unnecessary goods." In agreement with Nilsen that tampons and pads are crucial to women's health, Obama said that people living in those 40 states should work together to get those taxes removed, adding, "I suspect it's because men were making the laws when those taxes were passed." Along with a Change.org petition calling for state legislators to end the tax, tampon companies like Conscious Period are working to provide period products to homeless women through one-for-one giving models. [Time]

At last night's Critics' Choice Awards, Amy Schumer won Best Actress in a Comedy for her role in Trainwreck and took off her shoe while accepting her trophy. As we've grown to expect from the funny lady, it wouldn't be an authentic speech if she didn't wow us with a priceless moment. This time, the removal of her Manolo signified her respect for fellow actress Tracee Ellis Ross in the audience—who happily accepted. Watch the video of Amy's speech here.

Is A Second Season Of Making A Murderer Happening?

Since the release of the binge-worthy Netflix series Making a Murderer , filmmakers Moira Demos and Laura Ricciardi have had several phone calls with Steven Avery that were recorded for potential inclusion in future episodes. While a second installment hasn't been confirmed, the co-creators of the true-crime documentary have said they're staying clued in to Avery's case. Another tidbit to consider? According to Ricciardi, Avery hasn't seen the documentary: His request to view it was denied by his warden and social worker. We're willing to bet if Avery does get a chance to watch the series, his reaction would be compelling footage for a season two. [People]

In a captivating Instagram post on Sunday, Netflix announced that season four of Orange Is the New Black will debut June 17. In other words? Prepare to dedicate a portion of your summer to binge-watching the season—and thanks to last season's cliff-hangers, we can't wait to see what's in store for our favorite inmates. [Mashable]

Carrie And Big Weren't Supposed To End Up Together

For those SATC fans who didn't care for Carrie and Big's final act, Darren Starr agrees with you. The creator of the beloved series admitted in a recent interview that he relinquished some power in the writers' room to encourage a collaborative environment: "At a certain point, you've got to let [the writers] follow their vision. But I think the show ultimately betrayed what it was about, which was that women don't ultimately find happiness from marriage. Not that they can't. But the show initially was going off-script from the romantic comedies that had come before it. That's what made women so attached." Thanks a lot, rom-coms. [Vulture]

At last night's Democratic debate, Hillary Clinton revealed her idea of what her husband's role would be as First Gentleman of the United States. As a former President, Bill would start in a "kitchen-table role" when it comes to advising on economic issues and move into a "real policy role" after she sees how things go. Said Clinton: "I'm going to have the very best advisers I can possibly have, and when it comes to the economy and what was accomplished under my husband's leadership in the '90s, especially when it came to raising incomes for everybody and lifting people out of poverty more than any time in history, you bet I'm going to ask for his ideas. I'm going to ask for his advice, and I'm going to use him as a goodwill emissary to go around the country and find the best ideas we've got." Talk about lady power. [People]

It was a star-studded reunion for the High School Musical 10-year anniversary. In a celebratory telecast of the movie, Vanessa Hudgens, Ashley Tisdale, Lucas Grabeel, Corbin Bleu and Monique Coleman came together to tape nostalgic segments at a high school gym in LA. As for Zach Efron and his abs? Don't worry, they can be seen in a special pre-taped message sure to make you swoon. Tune in to the Disney Channel at 8pm on January 20. [E! News]

Easily the biggest homebody of the bunch, Kourtney Kardashian has a knack for design, nutrition and nailing the mom game. With a fan base privy to her impressive interiors, she's now spilling her secrets for pulling off a chic, cozy and kid-friendly space. [Vogue]

Radio's Revival Can Save Women

With wildly popular podcasts like Serial, radio has seen a huge resurgence in the US. But in countries where Netflix, Google and social media aren't an option, radio plays a far more crucial role. It's transforming the lives of women, giving them a platform to tell their stories and discuss sensitive topics, thanks in large part to Anne Bennett, executive director and founder of Hirondelle USA, who's spent years helping establish and manage radio stations in Liberia, Sierra Leone and South Sudan. [Refinery 29]

On Saturday, US astronaut Scott Kelly posted an Instagram of an orange zinnia flower the International Space Station team grew—in space! According to NASA, the flower is edible and was selected because it's a harder plant to grow than lettuce, which has already been successfully cultivated off Earth. As NASA continues to learn how to garden in space, the plan is to someday do so on Mars...kind of like those potatoes in The Martian . [Refinery 29]

Like many a celebrity, actress and Girl Meets World star Rowan Blanchard has taken to social media to open up about herself, but this time, the focus is on her sexuality. The brunette beauty refuses to be labeled, according to a Twitter draft she screen-grabbed and shared, stating, "In my life—only ever liked boys however I personally don't wanna label myself as straight, gay or whateva so I am not gonna give myself labels to stick with—just existing." While the star admitted her surprise about the negative comments she's received, she won't apologize for being herself. [Cosmopolitan]