Behind every great outfit, there’s an even better story. 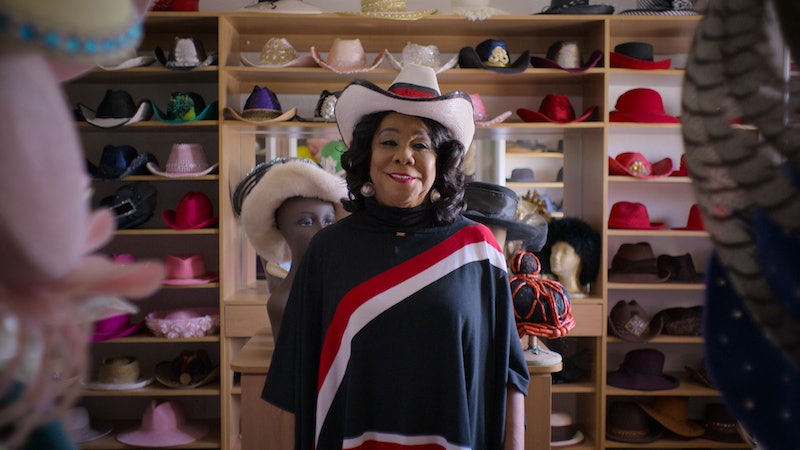 Take a minute and dig into your closet. It’s likely that somewhere in there, hidden behind the of-the-moment structured blazers, prairie dresses, and slinky silk skirts there’s a gem that’s been around for more than a few seasons. A piece that you always skip over during your semi-annual or quarterly closet cleanup. A piece that, despite not being worn often, you can’t seem to part with because of its sentimental value. Maybe it was a jacket passed down by your grandmother or that top you wore the day you met your life partner or the dress you wore on your very first job interview. Whatever it might be, there’s a story behind said item that keeps you tied to it. This complex connection to clothing is exactly what Netflix is attempting to capture with Worn Stories, its latest show.

The new series, debuting on April 1, joins the streaming service’s roster of hit programming that includes everything from reality shows (yes you, Love is Blind) to soapy period dramas (hello, Bridgerton) that have taken over quarantined households over the past year. The difference here is that there’s no sudden plot twist or scripted reality scenario to hook you. It’s authentic storytelling about something everyone can relate to and understand — clothing — might make it more magnetic than even the steamiest love scene involving the Duke of Hastings and Lady Daphne.

Worn Stories is actually an adaptation of Emily Spivack’s New York Times bestseller of the same name (and its predecessor Worn In New York), and is produced by Orange is the New Black creator, Jenji Kohan. The book is a collection of more than 60 “clothing-inspired narratives,” according to the author’s official site and includes a range of voices including some well-known ones like fashion designer Cynthia Rowley and musician Rosanne Cash. “By turns funny, tragic, poignant, and celebratory, Worn Stories offers a revealing look at the clothes that protect us, serve as a uniform, assert our identity, or bring back the past — clothes that are encoded with the stories of our lives.”

The concept of Worn Stories actually came from a run-of-the mill surf through eBay back in 2007, recalls Spivack. “I was looking for a pair of vintage high heels and I found this post that was a Playboy bunny outfit from the ‘50s and ‘60s, complete with the puffball tail, stockings, and bunny ears headband,” says the author to TZR. “It also had the ID card for the woman who had worn the outfit and it showed this black-and-white photo of her in street clothes. Something in the moment just clicked for me. I was like, Who is this woman? What is her story? How did she get into this? What does she do?”

This spark of curiosity led to a deeper search into Spivack’s own clothing archives and the items that hit a note of nostalgia and meaning for her. “So I started writing some of my own stories connected to my clothes, quickly realizing I was already familiar with my own stories,” she says. “So what would happen if I asked family and friends? When I spoke to them — and these were people I thought I knew frontwards and backwards — the stories I was getting were incredible ones I’d never heard before. And I thought, OK, there’s something here.” Indeed there was. What resulted was an entire compilation of narratives that ranged from close friends and new acquaintances (some Spivack even found on Craigslist!) to well-known public figures and celebrities.

Now, in TV form, Worn Stories follows the same storytelling template — but this time with whimsical visuals and the real-life humans behind the clothing telling their respective takes to camera. “I had always [fore]seen the show as fantastical and magical with saturated colors and very rich storytelling,” says Spivack, who explains that filming the show during COVID offered some surprising benefits. “Some of the limitations in terms of going out and doing more documentary-style shooting [allowed us] to come up with some fun and creative ways of retelling the story in a way I’m really happy with.”

Revisiting some of the book’s participants for the show also allowed Spivack to get deeper insight into some of the narratives she was already familiar with. “One of the stories [of which] I really enjoyed watching the progression of, from being in the book to being on the show, was the Simon Doonan story,” recalls Spivack. “It’s an incredible cultural history of Los Angeles in the ‘80s told through his Stephen Sprouse biker shorts that he would do aerobics in as an antidote from the AIDS epidemic [happening at the time]. His friends were getting sick and were going to the doctor and the doctors had no suggestions. So they turned to aerobics because there was this exercise craze going on.” The author explains that interviewing Doonan a second time allowed her to get even more details and also “create fantastical animations using a lot of archival materials from Los Angeles in the ‘80s,” essentially breathing new life into the story.

And just as Doonan’s tale has resonated with Spivack, so the author hopes the show as a whole will do so for viewers. “The people in the show and their stories show the collective human experience as told through clothing,” she explains. “Whether it’s a wedding dress or a t-shirt, things happen to us while we’re wearing clothing. The clothes that we wear are so much more than things that cover ourselves. They contain stories and memories. What do these things tell us about ourselves and about each other? I hope it sparks curiosity and conversation. And I also hope people will look in their own closets and put something on based on the story connected to it.”