“The importance of representation cannot be understated.” 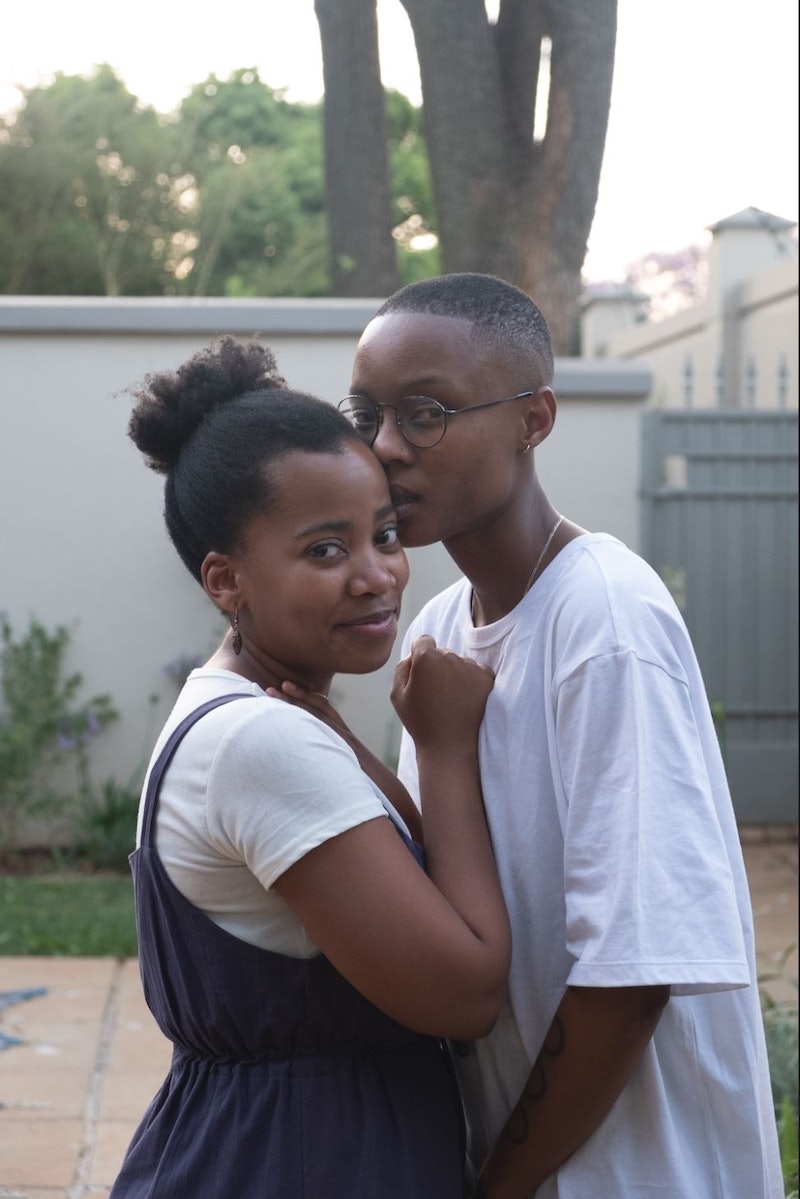 When Jamal Jordan hopped on the phone with me, he had just returned home from a road trip along the coast of California, where he visited sandy beaches and reveled in the lack of Wi-Fi. His respite was merited, as the writer had just spent the last two years traveling across the country, and the world, to document love stories about Black and brown LGBTQ+ couples. Their narratives cumulated into a book called Queer Love in Color, which Jordan released in early May 2021. Over 40 couples shared their stories of Black joy, relationships, and love. Each interview was paired with intimate and unedited portraits of the couples — lensed by Jordan himself.

But before his best-selling book, there was an article in The New York Times. And before that, there was a blog. “In college, I kept a Tumblr about queer people of color and images of them as inspiration, for myself and other people, because I felt really sad about not having that,” Jordan tells TZR. He revisited the blog back in 2018 when he was an editor at The New York Times and had to brainstorm ideas for the publication’s Pride edition. Reflecting on his prior romance-themed project was especially poignant for Jordan at the time: He was nursing an unrequited crush on a man who did not feel the same way.

So, in the midst of heartbreak, and with his old blog on the brain, Jordan felt inspired to create a database that documented queer love. “I went into a pitch meeting [at The New York Times], and I was like, ‘I’m going to make that record for myself,’” Jordan says. “Knowing that historically The New York Times didn't tell stories about queer people — especially queer people of color — I told them I just wanted to make a very straightforward story that adds to the record that love for people of color exists.”

For a few weekends, Jordan traveled around New York City, meeting, photographing, and interviewing couples of color. The story, titled “Queer Love in Color,” was published in June 2018 and swiftly exploded on the internet. “I tweeted the story and it started going bonkers viral. I think something like 67,000 people liked it — it was insane,” says the writer. “I was at work and I started getting all these Slack DMs from our social media team being like, ‘Yo, Jamal, this story is the biggest driver of site traffic!’ And at that same time, I was getting lots of messages and emails from different queer people and queer couples saying, ‘Holy sh*t, I can’t believe this is in the New York Times!’” Many people also reached out to Jordan and invited him to interview the queer couples in their lives, fueling the notion that this concept needed to be further explored.

Seven months after the article debuted, Jordan dove back into the facets of queer love, only this time in a more expansive, multi-paged, hardcover format. For the book version of Queer Love in Color, the 31-year-old traveled around the states, stopping everywhere from Miami, Florida to Chickasaw, Alabama, to document queer couples. He also ventured overseas and visited cities and provinces in both South Africa and Canada while working on the book.

“[I chose these destinations because] some of them were ones that impacted me personally, some were places where I grew up, and others were places that just fascinated me,” Jordan shares. “A big part was visiting places where I had previously lived and thought were homophobic or unwelcoming. I wanted to re-remember them in a way. But being [back in these locations], I actually felt like I was part of a larger community of queer people of color that I didn’t realize before, and it was life-changing to realize that.”

In Chicago, Jordan met Amisha and Neena, a lesbian couple with a story that brings him to tears every time he thinks about it. “They were best friends for 14 years before either of them worked up the courage to confess their love,” says Jordan. “They both, separately, were like, ‘Oh my god, I need to tell the other person I’m in love with them.’ But they both were sort of afraid to do anything.” Eventually, Amisha pulled inspiration from a concept about “magic moments,” which Paulo Coelho discusses in his novel By the River Piedra I Sat Down and Wept.

Jordan explains the term: “Every day you’re presented with a moment that can change your life, and most of the time we don’t do it. We don’t tell the person we like them, we don’t take the risk at work, we don’t say the word, we don’t do the thing,” shares Jordan. “So one day Amisha was staring at her cell phone and thought, ‘This is my magic moment. I have to tell her I’m in love with her.’ And she did.” Amisha and Neena have been together ever since.

At the core of Jordan’s book, there is an inherently political theme: the systemic exclusion of queer couples of color, especially Black couples, from media coverage. “The importance of representation cannot be understated. If you’re a straight white guy, you have endless examples of love, so much so that it gets hammered into your psyche that it’ll never be impossible to find someone. And so, if you never see something you can relate to, then how will you know if love is possible for you?” Jordan says. “One couple, Denise and Amy in Atlanta, told me that sometimes they even have to remind themselves that they aren’t the only ones and that there are a lot of queer people of color out there. They often just feel like they’re the only ones because they don't see content about people like them reflected in mass media.”

With Queer Love in Color, Jordan makes sure the underrepresented couples in the queer community, and the lives they share together, would be impossible to ignore. The writer also made a conscientious effort to uplift queer elders, as he believes seeing older LGBTQ+ couples can be immensely powerful for the youth. “Stories of older queer people, in particular, exist so rarely in our society that the impact for a lot of people is that you can’t even imagine what it's like to be a gay person who is old [and] in love,” admits Jordan.

Mike and Phil, two Black men in their 70s profiled in the book, demonstrate how important it can be to highlight older queer couples. “I posted [Mike and Phil’s] photo online, and one thing that a lot of people said to me afterward is that they had never seen an older gay couple before. So it was most important for me to include these elders just to show the possible longevity of the love that queer people have,” Jordan says. “I just want all the little queer kids of color to see it and be like, ‘That could be me, like, holding hands in South Africa!’”

On the topic of representation, Jordan refers to the modern commodification of Pride month — a phenomenon occasionally called ‘Rainbow Capitalism’ by journalists and LGBTQ+ scholars — as a highly nuanced means of widespread representation. “On one hand, it can be a good thing, right? It’s good to have some of the most major brands in the world supporting queer lives, but I do think like, at this point culturally, like, we get it. We see the Bank of America rainbow, and it’s really great that this Charles Schwab investment bank, or whatever, supports Pride,” he laughs. “But, Pride [month] at its roots was about building a community because we had to. Because our lives were being threatened.”

For this year’s Pride month, Jordan emphasizes that it’s crucial to reflect upon and hold gratitude for the members of the LGBTQ+ community from generations past. “I think a lot about queer history and about building upon the work of the people and the storytellers who came before us, before me. I always try to remember the work that the elders did to even make it possible for me to be in the spaces I am and to be telling the stories that I am,” shares Jordan. “I always try to remember how unique it is to be a queer person of color in major newsrooms and being able to do the work that I’m doing.”

In addition to releasing his book, Jordan’s using his own experiences as a queer journalist to support the LGBTQ+ community, specifically the younger generations. Jordan volunteers at the National Lesbian and Gay Journalist Association, where he works as a mentor and helps prepare students for the professional world.

“[The NLGJA] is a large organization that partners with all the major newsrooms to help make journalism less homophobic. They do a week-long, queer student newsroom where they get recent college grads to work with professional editors on a story for the week,” says Jordan. “I don’t know what it's like to be a 21-year-old today, but a lot of the kids say that looking at the journalism industry, and especially the prospect of being out in the newsroom, can feel overwhelming. So I just want to make it an affirmative space where you can be yourself and do your thing.”

To read Jordan’s book Queer Love in Color, you can find it at nypl.org, as well as on amazon.com. And if you wish to follow Jordan and see what’s next for the journalist, you can keep up with him on his Instagram: @lostblackboy.