After a year of vegan cooking and home workouts, the actor would like to put on heels and promote her new dystopian film, Chaos Walking. 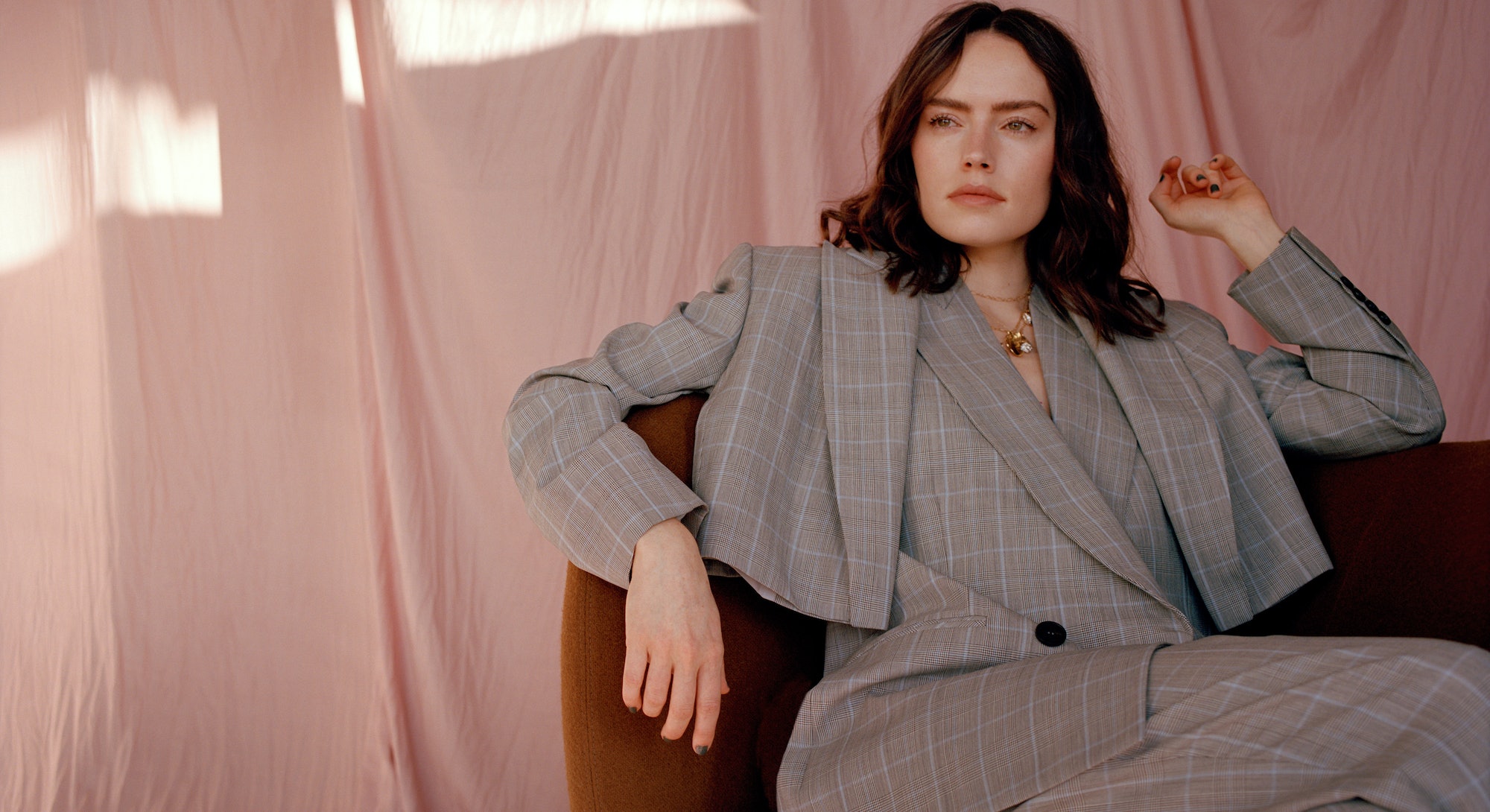 Daisy Ridley is not a religious person, but she does have a guiding spiritual philosophy. “My strategy for dealing with the world is truly believing, in my own life, that things happen for a reason, and timing is a big factor,” she says over Zoom on a snowy Friday in February. Ridley is wearing a black crossover two-piece from & Other Stories, her dark hair twisted into a high knot, makeup-free with a bright and clear complexion. “I did just use my gua sha tool,” she admits, smiling. “I thought, I’ll just take five minutes for myself.”

Timing has been key with Ridley’s new film, Chaos Walking, a lush and thought-provoking dystopian epic, mostly filmed in 2017, but due to various factors, not least the global pandemic, only arriving on our screens this month. “It feels really timely that it is coming out now, because people keep talking about toxic masculinity,” says Ridley. In the film she plays Viola, a pioneer dispatched to a distant planet where she finds herself in a backward society in which the men are afflicted by a condition that makes their thoughts audible, making them dangerously suspicious of women and their capacity for silence.

“There is so much more intrigue in quietness,” says Ridley, who, unusually for an actor, requested her lines be cut. “I tried to make her [Viola] quieter. I am that sort of person. My instinct would be to be quiet if I don’t know what is going on. … I am not a small-talker and I find it really difficult meeting people, it takes me a second to calibrate where I fit.”

That is not to say that Ridley is demure. She has the assertive charisma of a woman who has worked out how to negotiate her place in the world.

Cynthia Erivo, the British actress, singer, and songwriter who co-stars with Ridley in Chaos Walking, says Ridley brought "a wonderful quiet strength" and "innate kindness" to the set and to her role, but also "a seething determination."

Anecdotally, Erivo isn't alone in this perception. Ridley recalls one time at the airport, being chaperoned through a secret corridor in order to avoid a crowd that had become “a bit scary.” “The [airport security] woman said, ‘Are you an Aries?’ I said, ‘Yeah, how do you know?’ and she said, ‘Because you don’t know where you are going, but you are in the lead.’”

Ridley, 28, was raised in a lively female-centric household in West London with two older sisters and a couple of Ridley’s mother’s female friends helping out — “basically like family.” Her father was a photographer and her mother worked as a picture publicist but was home every night to read bedtime stories to her daughters. “I am f*cking obsessed with my mum,” says Ridley. “She worked since she left university; [she’s] amazing.”

But gender politics were never a significant subject of conversation, despite all that big female energy. “I think the main thing was that it was never distinguishable that we were women. … My parents were so chill, when I said I was going to be an actor, they were like, ‘OK.’ When my sister said she wanted to be a reiki instructor, they said, ‘OK.’ It is interesting looking back, reframing it as so liberal, because at the time it just felt nice and comforting.”

As a result, when Ridley won the role of Rey, the heroine of the final Star Wars cycle, she didn’t think of it in terms of dismantling centuries-old, gender-based stereotypes about who must be saved and who does the saving. “I knew it was an amazing role, but I didn’t think, ‘This is an amazing role for a woman,’ just like, ‘This is awesome.’”

Ridley was 21 when she got the part, an unknown who had spent the previous two years taking classics courses and working in a London pub. But her blank canvas anonymity, combined with an innate grace and an ability to play strong yet vulnerable, made her the perfect avatar for a nascent Jedi upon whose shoulders rests the fate of an embattled universe.

“We knew she had something special straightaway,” says Nina Gold, the Star Wars casting director, who saw “gazillions” of actors before discovering Ridley — who arrived at her audition prepped with Princess Leia buns. “She was very dynamic with a really original, forceful energy. It was an incredible responsibility for her, to take one of the most popular franchises in the world, and to be the person to bring it into the future. Of course Daisy totally rose to it.”

But there were moments when the enormity of the task overwhelmed Ridley — so much so that toward the end of filming the second episode of the trilogy, she felt very low, missing the safety and easeful bustle of home. “It was just a lot,” she says. “I had always felt quite mature and suddenly I felt like a child and it was all very scary. I like to be in control of what is going on and suddenly I wasn’t in control. Scary things happened, like two men knocked on my door…”

Beyond the external threats, like strange men turning up at her home requesting autographs, there were internal battles. Ridley felt like she couldn’t possibly live up to people’s expectations of her. “I am aware, having played someone so heroic… that people might think of me in a certain way, and then I feel like a massive letdown. That’s not me. It may be like a really great version of myself — I am a bit strong, and sometimes I am a bit brave, and sometimes I climb some things. I mean, I did climb up the side of that spaceship, but it’s not my everyday hobby.”

“A lot of what was panicking me was people being close, and then with kickboxing I felt so much tougher. I got to the point where I was like, ‘What is the worst thing that could happen?’”

She deteriorated, emotionally and physically. “I was just not well; I had holes in my gut wall,” she says. So she took time out and had some therapy, “which was great because I got the chance to talk it out.” There were other revelatory moments. During the making of the final installment of Star Wars, Ridley attained her green belt in kickboxing, and the process of learning the martial art, of sparring, of being caught off guard, again and again, made her more confident about her personal space.

“A lot of what was panicking me was people being close, and then with kickboxing I felt so much tougher,” she says. “I got to the point where I was like, ‘What is the worst thing that could happen?’”

Ridley was 26 by this point, and had matured, growing into her role and position in the public eye. “I had the whole impostor syndrome thing, thinking, ‘Why me?,’ and then in training for Episode 9, I remember thinking, ‘Just take your moment. You have worked really hard for this. Yes, you got an amazing opportunity, but just enjoy it,’ and I had such an amazing time. I remember feeling really present, not apologetic anymore, just, ‘This is me. I am here. This is what has happened,’ which was wonderful.”

Ridley has spent the last year living in a house outside London, enjoying long country walks. It has been reported that she is in a relationship with the British actor Tom Bateman, whom she met on the set of Murder on the Orient Express. Lockdown life includes meatless burgers on a Friday (Ridley has been vegan for four years) and a roast on a Sunday, perhaps the smoked tofu, walnut, and beetroot log from her favorite vegan blog, the Lazy Cat Kitchen. “Actually I am a cheagan,” she says. “Every few weeks, I have sushi or something, otherwise I get really tired. Because I train a lot, I do get run-down.”

Her schedule involves thrice-weekly sessions with a trainer. “I do a mix of things, a lot of body weight stuff; it’s really about health, about the fittest version of you,” she says. She doesn’t meditate — “I always panic when I do it, which shows it is something I probably need to be doing” — but does sleep with a rose quartz crystal by her bed. Normally she is a voracious reader, enjoying books by authors like Madeline Miller and Max Porter, but during the pandemic she has found it hard to concentrate, so she has marathon-watched TV instead. “I May Destroy You, Watchmen, Succession, Schitt’s Creek, Broad City, The Queen’s Gambit, so much stuff!” She also watched Lord of the Rings for the first time. “I f*cking love Lord of the Rings. I can’t believe it took me so long to get there.” I suggest that she would make a good elf; she has the just right combination of ethereality and physicality. “You know what is hilarious? John Boyega used to call me Legolas, because clearly I look like a male elf,” she says.

Work has ticked along during lockdown. In between jobs, Ridley trained to be a doula. “I just find pregnancy to be beautiful,” she says. “And there was space on the course. I don’t know that I’ll do it — I might, for a friend or something — but it was really interesting and a really beautiful female energy group.” There have been radio plays recorded remotely; she did the voice for a video game with James McAvoy and Willem Dafoe, and she has been working with a dialect coach on her American accent. Her next big role will be as the American Gertrude “Trudy” Ederle, who was the first woman to swim the English Channel in 1926, in Disney’s Young Woman and the Sea.

“The story is amazing because of the things that she achieved,” says Ridley. “I am just really lucky with the stuff I get sent, and the content that is being made now is properly three-dimensional.”

Ridley has missed the pizazz of normal life during lockdown and is looking forward to doing the publicity for Chaos Walking — and the opportunity to wear beautiful clothes once again. She is styled by Samantha McMillen, which she considers one of the perks of the job: “Sam is amazing. I always feel like me, just like a super polished version of me.” Left to her own devices, Ridley tends to get “really stressed” getting dressed. “I was talking to someone and she was just like, you just need a uniform, so I got some shirts, and jeans that fit, so I am like, OK, that is my uniform,” she says. When she wants something more dressed-up, she likes blocks of color, “and I love a nipped-in waist because of my body shape. My favorite designers are Alexandre Vauthier — his clothes are super powerful and sexy and awesome — [and] I like all the classics, Chanel and Dior and Roksanda is beautiful. … Fashion can be such a beautiful way of self-expression; I hope that everyone is super overdressed [after lockdown].”

“I hope that everyone is super overdressed after lockdown.”

But until lockdown is over and the heels and gowns can come out properly, Ridley will be living off the thrill of her appearance in her all-time favorite TV show, The Great British Bake Off. She was part of a celebrity episode, which will raise funds for Cancer Research UK and be aired later this month. “It is really high stakes,” she says. “[On] the second day, I was like, ‘Am I going to continue to be told off for my cakes?’ I had to remind myself, ‘It’s for charity.’” Ridley cannot reveal what she baked, only that they were some of her vegan favorites, and that GBBO was one of the most challenging things she has ever done. “I was on an adrenaline high for a week after that.”