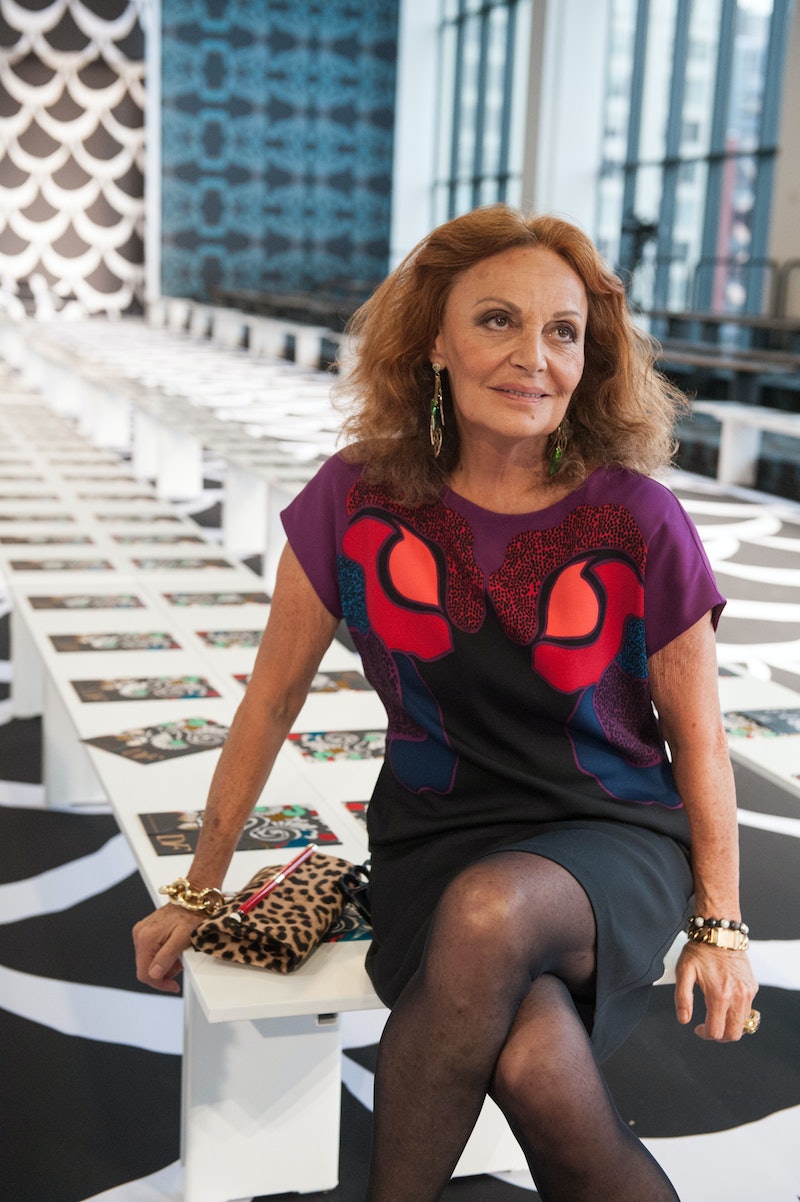 Diane von Furstenberg is the epitome of fabulous: She’s effortlessly chic, wildly successful and utterly self-assured. The unstoppable inventor of the iconic wrap dress is the woman we aspire to be. Never one to rest on her laurels, von Furstenberg sent her gorgeous Spring ’15 collection down the catwalk at New York Fashion Week yesterday, and this fall, she opens new boutiques around the globe; releases her memoir The Woman I Wanted to Be; and premieres her new E! show, The House of DVF. Get inspired by this legendary designer and role model in our latest Women of Style interview.

“My first real job was as an assistant to a photographer and filmmaker’s agent in Paris. I was 20, and it felt like life had finally begun. I learned about the power of image.”

On Why She Decided To Launch Her Brand

The entrance to the Journey of A Dress exhibit, which documented the history of the wrap dress. Photo: Courtesy of DVF

"I was pregnant, engaged to be married and moving to America, but I knew I wanted a career of my own. I was an apprentice at a factory in Italy, and I begged the owner to let me make a few dresses and sell them in America—that’s how I got started."

The Most Significant Lesson She’s Learned

The designer releases a memoir, The Woman I Wanted to Be, this fall. Photo: Courtesy of DVF

"Know who you are and stay true to that."

"My mother was very influential in my life. Also Diana Vreeland, who had such vision and was kind enough to help me when I was just starting out. Gloria Steinem is also very inspiring to me."

On Her Spring Collection

"The collection is called Riviera, and it is inspired by the glamour of the midcentury Cote d’Azur—think Brigitte Bardot and gingham and azure blues, all spun together in a nostalgic collage of print and color."

"One of the organizations closest to my heart is Vital Voices. It is an incredible organization dedicated to empowering women all over the world."

Her Advice To Other Women

"Know who you are and be true to that. You have to take the time to find clarity."

"Ever since I was a little girl, sunglasses always make me feel glamorous and mysterious."

On Traveling In Style

"Hiking with my family or spending time alone in my studio at my farm in Connecticut reading, watching films and gathering inspiration."

"Take risks and be willing to fail. You only regret the things you don’t do."