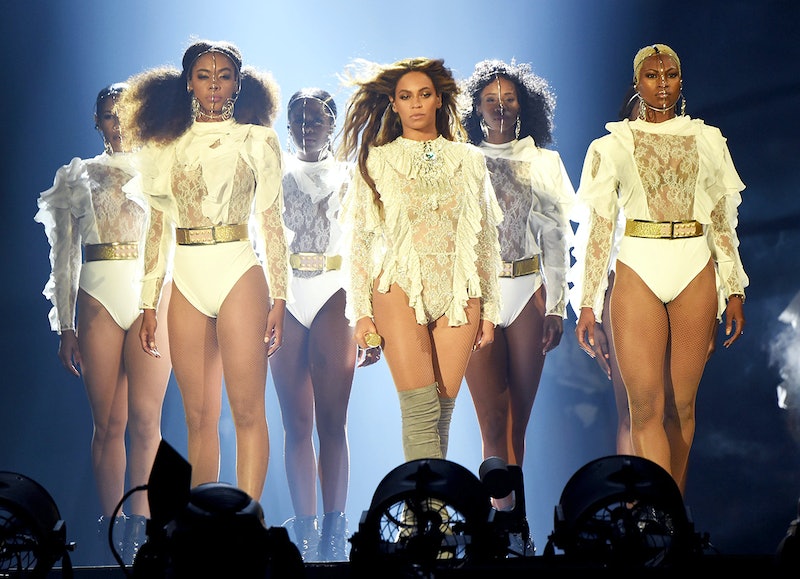 Few music-related events are as much of a scene as Coachella; however, if you’re actually mourning the end of the festival because you love music, you’re still in luck this summer. We’ve got stateside festivals like Lollapalooza and Bonnaroo still to come—as well as marquee events abroad such as Primavera and Glastonbury—but since tickets and logistics for these events can be prohibitive, you might also take heart in the knowledge that just about everyone who is anyone in terms of musicians is on the road this summer. Here, our top picks for tour tix that will help to ease your post-Coachella despair.

Selena will be touring the states until after her Anaheim, California show on July 9, at which point she'll hop overseas for the duration of 2016. Need a little extra motivation to snag tickets ASAP? Her costumes are fierce, as is her attitude—at a recent show, she grabbed a fan's sign that read "Marry Justin Please" and crumpled it up onstage.

The queen of creating controversy has already caused quite the commotion with her "Formation" tour—on Saturday night, police in her hometown of Houston protested the show by shining a blue light in the direction of the stadium as she performed. We'll obviously be attending for the music—and to see the best performer of our generation do her thing live—but we have to admit that we're not mad at all the added drama. The "Formation" tour ends October 2.

Incredibly, but not surprisingly, Adele's entire tour is sold out; however, we did a little digging and found that there are some tickets left to be snagged on sites like Stubhub. Look for unexpected, mid-show interactions with fans and, if you're lucky, the Adele version of twerking.

The North American portion of this program ends next week, but there's still a chance to catch RiRi in action if you'll be summering in Europe at all this summer and, if you're lucky, rumored Rihanna beau Drake will make an appearance at whichever show you happen to catch.

Iggy Pop is a legend, and if you don't know why, you need to read Please Kill Me ASAP. His Post Pop Depression tour features members of Queens of the Stone Age and the Arctic Monkeys, and will be sure to have you wondering how the 69-year-old has more energy than you do. This one's also moved overseas at this point, so you might want to plot your summer adventures to coincide with one of Iggy's tour dates abroad if you hope to catch this iconic event.

What could possibly be sweeter than watching Justin Bieber break down in tears onstage, which he actually did during a recent performance in Philadelphia? It may have taken some of us awhile to come around when it comes to Justin but, by now, we are all Beliebers. He'll be touring the states—and breaking young hearts—until July 19.

The only things that makes us swoon harder than Bieber's tears are Father John Misty's hips, and the way he twirls them around the stage when he performs. He's touring until September 2.

As of a few days ago, these adorable Aussies are now on tour until September 4. Openers include M83, Unknown Mortal Orchestra, and Mac DeMarco.

Last Shadow Puppets is dreamy Arctic Monkeys frontman Alex Turner's side project with singer Miles Kane. They're currently out of the country, but will return on July 24 for a few stateside shows.

If you grew up in the '90s, this tour is a must. Unfortunately, dates are sparse and several of the shows are sold out already, so you'll want to look into the ticket situation ASAP.

All three acts on this tour belong to the Rock & Roll Hall of Fame, and if you think you don't know their music, you're probably wrong. This tour starts on July 14 and ends September 23.

Paul Simon released a new album last month, but it's likely the old hits you'll turn out for. He'll be touring until June 18.

The friendship between these two is just too cute, and boy, oh boy can Demi sing. The duo will be touring until September 17.

Fear not if you failed to snag tickets to Desert Trip—aka "Dadchella"—as Dylan will be on tour until July 17.

Coldplay return stateside on July 16. If you aren't sure if you should spring for tickets, we suggest you watch this video, which so perfectly demonstrates how you feel after listening to most of their songs.

Drake sings just about every song on the radio, so even if you aren't yet familiar with his newest album, Views from the 6, you'll probably have a lot to sing along to at one of his shows this summer. He'll be on tour until September 7.

Some of us didn't get to attend Coachella, while some of those who did were too distracted by the festivities to actually appreciate the music. Luckily, headliner LCD Soundsystem is on tour well into August.

The Cure is currently on its first major North American tour since 2008. They'll be stateside until July 17.

If you aren't yet familiar with Vince Staples, who Rolling Stone recently called "The Most Exciting Man In Rap," you should download his album Summertime '06 stat. He'll be on tour stateside until June 9.

Radiohead released their highly-anticipated album, A Moon Shaped Pool, this past Sunday, and if you haven't yet given it a listen, you'll want to do so as soon as possible. They'll be touring well into the fall.