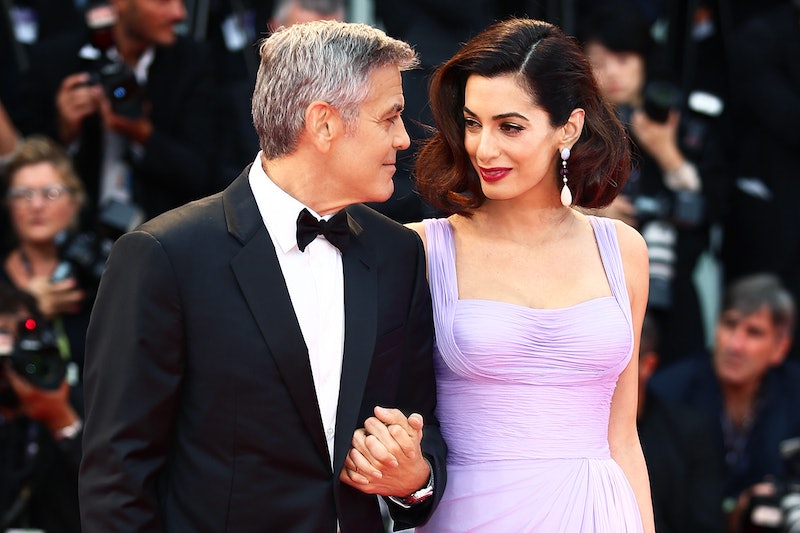 Once upon a time, George Clooney was a self-proclaimed bachelor who said he’d never, ever get married again or have kids. Things have changed, and they’ve done so in a way that’s given every person who’s ever heard, “When it’s right, you’ll know,” or some such mantra regarding their failed dating life, hope. This week, he revisits the reason for his total transformation—meeting Amal, of course—for The Hollywood Reporter, and their story is even more romantic than we ever knew. Here, our favorite quotes from the piece, all of which make even the most cynical among us believe in love (at any age!).

On their first impressions, in Lake Como: “I thought she was beautiful, and I thought she was funny and obviously smart. I don’t know [what she thought of me]. She probably thought I was old.”

On how she made the first move: “She sent some pictures from when she was here [in Lake Como], and we were writing each other, emailing, talking, mostly about what was going on in each other’s lives, and over a period of time it became clear we were more than just friends.”

On their first date in London: “She said, ‘Let’s go to this place.’ It was one of those places that was incredibly hip and chic. And when we came out, there were 50 paparazzi there. But she handled it like a champ. And pretty quickly, things escalated once I was in London.”

On the moment he knew, after a safari in Kenya: “I had a picture of her, looking back, smiling at these giraffes, and I said, ‘I think I’m going to ask her to marry me.’ There was no doubt that we were the right couple and that we were the right team. And we were a team from right off the bat. Immediately, we felt we were just happy, and we have been happy ever since.”

On surprising her: “It was a full-on leap of faith. After dinner, I told her there was a lighter to light the candle in the drawer, and she reached back and pulled out a ring. And I did all the stuff, got down on my knee and did all the things you’re supposed to do. And she just kept staring at the ring, going, ‘Oh, my God.’ It was 20 minutes of me on my knee, waiting for her to say yes, because she was so shocked.”

On his new life versus his old: “Now my house is filled with the warm sounds of babies crying. You should see when my friends show up and see me change a diaper, the laughter that comes from them. I go, ‘I know, I know.’ I’ve given them so much sh*t for so many years, I deserve every bit of it.”

On his only regret: “Suddenly, the other person’s life becomes more important than your own. That’s not unique to us; that’s [unique to] all people who are lucky enough to find the perfect partner. I’m sorry I was 50-something when it happened, but only because I could have spent even more time with her.”

We’re not crying. You’re crying. Don’t look at us. Don’t look at us! Oh, and if all these achingly beautiful quotes aren’t enough to make you green with envy with respect to the life of Amal (who we’d vote for as president in a heartbeat), the reporter who conducts the interview has this to say of the already famous twins. “It must be said, even by a reporter who has no special fondness for babies, that they are particularly adorable.” Of course they are, because this is a real-life fairy tale, one with an uplifting message for us all. “Every single day of my life, I just feel lucky,” George concludes. “Lucky in my career. Lucky enough to have found the perfect partner. Sometimes in life it doesn’t happen on your schedule, but you find the person that you were always supposed to be with. That’s how I feel, and I know that’s how Amal feels.”