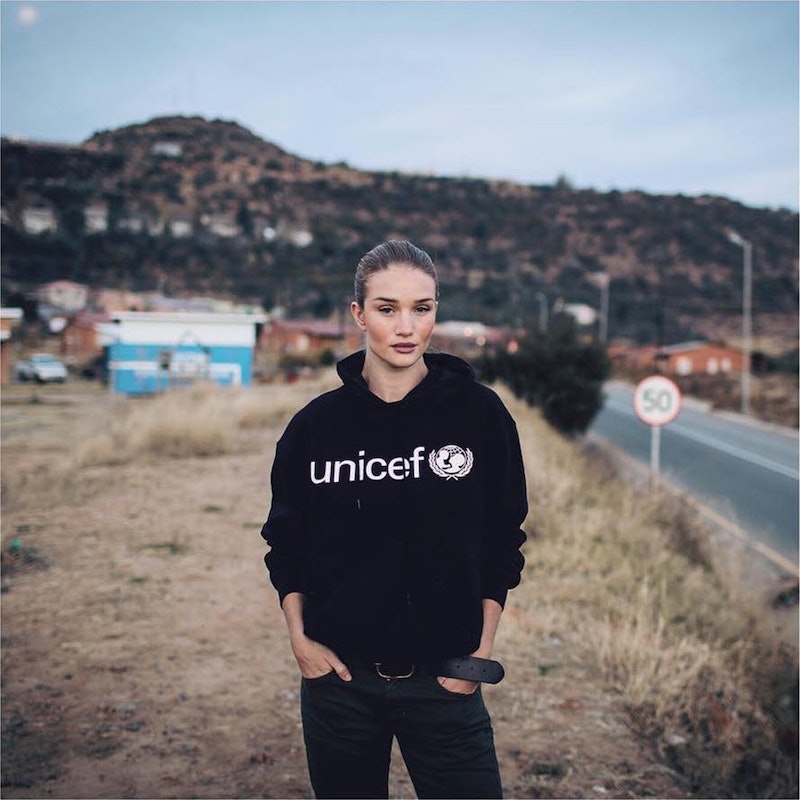 We love it when models have a heart of gold to match a gorgeous exterior, and such is the case with many modern muses in the fashion industry. Plenty of fixtures in the celebrity world use their public prominence to incite activism and encourage fundraising—take Leonardo DiCaprio, for example, who just raised $45 million at a gala in Saint Tropez for the environment—and these charitable catwalk queens, too, are doing their part for the greater good. Here, we highlight a few inspiring ambassadors who advocate for causes near and dear to their hearts.

Rosie recently embarked on a trip to Lesotho, a region in Southern Africa, with UNICEF UK. The organization focuses on the main factors endangering children in the world today including violence, disease and hunger. Rosie has been an ambassador for some time, partaking in trips to Cambodia and advocating for the cause within the UK.

The Victoria's Secret Angel is an ambassador for Family Equality Council, an LGBTQ support organization that focuses on families. Having both a gay mother and father—making her a "rainbow child"—Josephine is using her voice to bring awareness to and understanding of the LGBTQ community, as well as champion for equality. She recently penned this thoughtful essay for Huffington Post following the Orlando shooting at Pulse last month.

Natalia founded the Naked Heart Foundation in 2004, which started by focusing on building playgrounds for children in Russia and has since expanded to efforts around keeping children with their families rather than placing them in orphanages. Having grown up in poverty in Russia, Natalia understood the impact of play in bringing delight and joy to children despite extenuating circumstances—her own personal journey thus instilled a deep passion for the cause. Every year, she hosts the Love Ball fundraising event, which draws a crowd of celebrities and fashion insiders. At the 2016 event alone, the foundation raised over $4 million.

Christy founded Every Mother Counts after producing her documentary No Woman, No Cry that shed light on the dangers of childbirth around the globe. The organization seeks to make pregnancy and childbirth safe for every mother by raising awareness of the issue and implementing health programs around the world so women have access to the proper care and facilities. Having experienced complications herself while pregnant, Christy is a staunch advocate for the cause and travels for field visits as well as hosts local fundraising events.

Daughter of the inimitable Carine, Julia Restoin Roitfeld supports Smile Train, a charity that helps treat children with cleft palates in developing countries. The model, mother and founder of popular blog Romy and The Bunnies recently visited patients in Haiti and dedicated her birthday to the cause, asking her friends and followers for donations to benefit Smile Train.

Doutzen has been a longtime supporter of Dance4Life, which informs youth about HIV and AIDS prevention (plus other sex-ed matters) using song and dance as an educational tool. As an ambassador, she serves as a positive role model, plus participates in a variety of on-site projects put on by the organization.