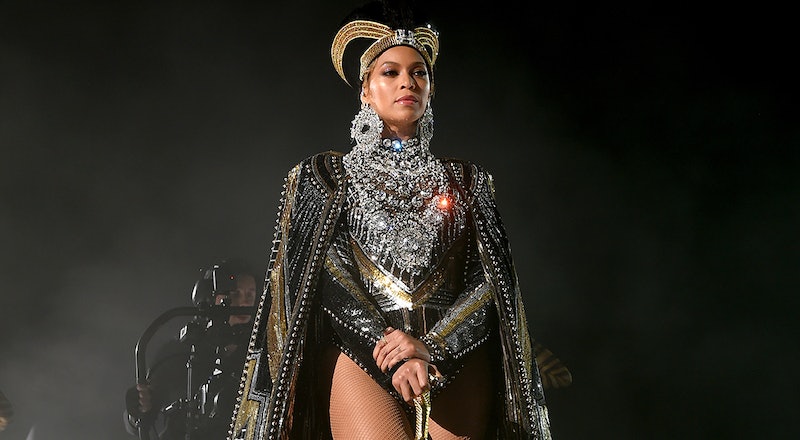 After much anticipation (Queen Bey was originally slated to perform last year but cancelled following doctors orders because she was pregnant with twins), Beyonce took to the main stage at Coachella last night. She is the first black woman to headline the festival which she did for two hours, flanked by a New Orleans-style brass marching band and a number of surprise performances.

Known for her epic fashion choices, the wardrobe did not disappoint. Her multiple outfit changes were all custom-made by Balmain, including those of her dancers. In keeping with her survivors message, the designer created this Egyptian-inspired cape with embellishments complete with a matching hat; a yellow collegiate hoodie inscribed with an embellished “BAE”; a camouflage minidress; and a top emblazoned with a Beyoncé crest featuring a raised fist, a panther, a bee and an Egyptian goddess. According to an interview with Vogue, he had only a few weeks in which to execute the entire mini collection.

Confirming rumors that have been swirling for months, Beyoncé reunited with Destiny's Child alums, Michelle Williams and Kelly Rowland, for a rendition of "Say My Name", "Soldier" and "Lose My Breath". She also included a tribute to Nina Simone, quotes from Malcolm X and sang "Lift Every Voice and Sing" during her impressively long performance.

Jay Z joined Beyoncé on stage, a prelude to the joint tour they kick off this summer. Her sister, Solange, sweetly danced with her on stage—Beyoncé did the same when her sister performed at Coachella a few years ago.