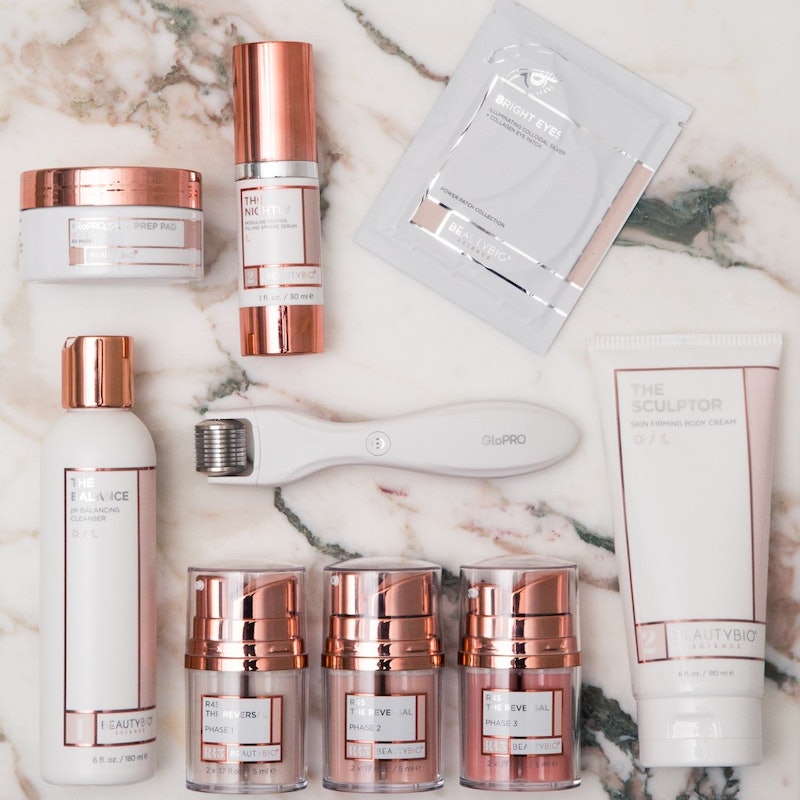 GloPro is one of those viral beauty products you hear about once and then it feels like everyone else is suddenly talking about it, too. Technically, GloPro includes a whole line of skincare products, but what gets people obsessed is the Microneedling Regeneration Tool, which is a $200 rolling device with 540 teeny needles on it that prick the skin as you use it. It does feel a little itchy, but the idea is that microneedling creates micro injuries that trigger your natural collagen production. (And we’re happy to put up with anything that might resemble a bitsy torture device for that.) It also has red LED lights, vibrates and has clinicals that show 30% wrinkle reduction after a month. Not surprisingly, within a year of its launch, this creation became a $50 million company.

If there’s any living proof as to whether this thing works, it can be found by spending an afternoon with GloPro president and cofounder Jamie O’Banion at the Baccarat Hotel in New York City, as we did. Jamie has the kind of impossibly flawless skin that leads you to believe she spends hours at the spa every week and has a whole staff of people making sure she eats, sleeps and breathes only pure zen. On the contrary, this Dallas-based mother of three is constantly on a plane (she flew 100,000 miles between February and July last year), hardly sleeps and, she tells us, her daily exercise consists mostly of walking up stairs and doing resistance-band workouts while on conference calls. (She also does push-ups naked, but more on that later). Forbes thinks she could soon be one of the richest self-made women in the country.

Of course, we should probably give her genetics some credit, and it would be apropos considering her booming business was launched with her father. The family literally owns a cosmetics lab (dream!). Below, we ask her about creating her company and her on-the-go beauty routine.

“My father is an owner of one of the top labs in the US for prestige beauty products. He and I have always been best of friends—we’re very close. He became owner of a lab in Germany and other involvements in Singapore, so at a young age he’d ask me if I wanted to go. My mother didn’t want to fly. He just took me with him to these meetings. Before I wore a bra, I could tell you what the skin concerns of someone in Singapore were and what kind of products they like. When I was 12, I helped carry over a microdermabrasion machine from Germany that was set up at our kitchen table, and we tested it out. When I was in college, we were working on this silver mask idea and totally freaked out my roommate’s boyfriend! It takes a lot of work to get [a new product] to the right place.”

For the full article and more on why the tool works so well, head over to Coveteur.