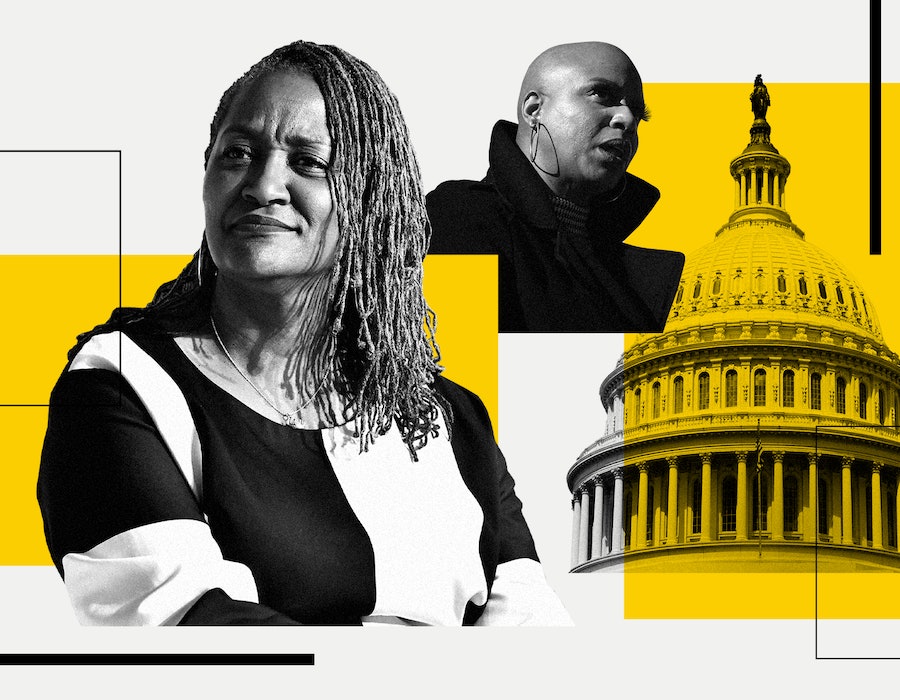 The phrase "respectability politics" is one that Black women know all too well. Many of us grew up believing that only straight, flowy hair was "professional," toiling with our texture for hours to perfect it for job interviews, special events, and the simple workplace day-to-day. Black women in politics, however, are pushing to break these long-held standards and oppressive systems, and they're not letting up.

It's important to note the psychological implications that come with the relationship between a Black woman and her hair, no matter her industry. According to PsychoHairapy: Using Hair as an Entry Point into Black Women’s Spiritual and Mental Health, a research article by Dr. Afiya Mbilishaka, psychologist and hairstylist, "Hair texture, length, and style often guide an overwhelming force over the negotiation of self-image and self-worth for Black women," she tells TZR. "Black women spend a disproportionate amount of time thinking about styling and caring for their hair in comparison to women of other racial and gender groups. Hair care practices supply an occasion for Black women to get their hair washed, detangled, conditioned, moisturized, cut, dyed, and styled in either a nurturing or harsh approach." She insists that Black women make a "psychological choice" to style their hair using chemical or non-chemical methods, such as twists, braids, locs, weaves, wigs, and straightened styles.

Much of that psychological choice derives from pressures in the workplace. "Systems of oppression have shaped the prejudicial treatment of Black people based on the appearance of their hair, from the era of chattel enslavement to present-day America," Dr. Mbilishaka says. "Racial discrimination has been outlawed by the Civil Rights Act of 1964 and yet hair discrimination is a legally sanctioned offshoot of racial bias that justifies unequal treatment of Black people in educational and work settings." She also shares that her research revealed that almost 80% of Black women reported the need to change their hair to match the office culture because of the fear of hair discrimination. "These hair experiences trigger unwarranted psychological distress for Black people," she says.

A 2019 study by Dove found that "Black women report being 30% more likely to receive a formal grooming policy in the workplace — at both the application and orientation phase." The survey also found that "hairstyles inherent to Black identity — locs, braids, and natural curls — are perceived as less professional."

The psychological stress associated with hair is often so deep, that Black women often end up criticizing their own. Take Ayanna Pressley, United States representative for Massachusetts, for example. Before embracing a bald head due to alopecia, Pressley told The Root that was she was vehemently advised against wearing her Senegalese twists. Most surprising, she shared that it was not white people, but mainly women of color who said the look “wasn’t polished enough.” And in an interview with POPSUGAR in 2020, political strategist Meredith Lilly reflects on an instance years ago when her non-Black colleagues chose against voting for a Black woman candidate. "They couldn't vote for this particular person because [their hair] reminded them of a Black criminal," she said in the article.

Instances and notions like these are slowly but surely being dismantled by women like Holly J. Mitchell, member of the Los Angeles County Board of Supervisors from the 2nd district and former state Senator for California's 30th senate district from 2013 to 2020. Hair is a topic particularly close to Mitchell's heart. "I'm 56, which means I was a product of the '80s, when I rocked small microbraids with elaborate beads," Mitchell tells TZR. "I had an amazing braider, Sibongile Bradley, who braided Patrice Rushen's hair. I would work all summer to save my money to get my hair braided by these amazing artists."

That love for embracing texture followed Mitchell for decades into her career in politics. "When I graduated undergrad in '82, I was going into something called the Coro Foundation Fellowship, and my mother sat me down and said, 'OK, I think when you go in into Coro, you should not wear your braids,'" she says. "So I didn't, and I was the only Black fellow in Los Angeles that year." Mitchell says that while it broke her heart, she realizes that wearing her hair in braids may have only made her job more difficult. "I was having a tough enough experience at 22, really trying to carry and explain and educate on the Black experience," she says. "It was hard enough with my hair permed, I can only imagine how it'd be if I had braids."

"It was hard enough with my hair permed, I can only imagine how it'd be if I had braids."

Jalina Porter, Principal Deputy Spokesperson at the U.S. Department of State, grew up with a different hair experience than that of Mitchell. "Growing up, I always had a relaxer," she says. "I got braids every now and then, but straight hair was all I knew. I never really enjoyed going to the salon for routine visits, though. Stylists always made it a point to tell me how thick my hair was and the difficulties it posed for them." Porter was also involved with dance and sports, making it a challenge to preserve salon styles.

Upon attending a historically Black college and university for her undergraduate degree, her trajectory changed. "When I saw the dexterities of all the beautiful, natural styles around me, that’s when I knew I wanted to go natural," she says. "After graduation, I began transitioning and debuted my natural hair by the time I was ready to move overseas and live in Southeast Asia where I didn’t have regular access to running water or electricity. I still made it work and was able to test out different styles until I found a few staples that suited me at that time."

Unlike Mitchell, however, Porter didn't feel the pressures of hair when entering politics. It's not that those pressures didn't exist. However, for Porter, she'd already been used to challenging the norms. "I had been natural for years and felt no pressure to wear my hair any particular way," she says. "At the same time, I had also been an NFL cheerleader and NBA dancer and was intentional about wearing my natural hair both on and off the field and court. I was always the sole dancer with natural hair, which wasn’t considered as desirable in that industry. Even with that being the case, I always loved that I stood out and didn’t conform to industry standards and societal norms."

That attitude has stayed with Porter. "In the workplace, that same feeling of showing up confidently as myself remained constant," she says. "I’ve worn varying styles in the office from my hair in its natural state — both curly and straight — to box braids and goddess locs. I think it’s important for Black women to be able to embrace ourselves completely in the workplace and unabashedly put our heritage and self-love on full display. That’s always been my goal because when you show up for yourself in that way, you’re also showing your colleagues how best they can embrace you, as well."

"I always loved that I stood out and didn’t conform to industry standards and societal norms."

Mitchell understands that while acceptance of any hairstyle in politics is becoming more prevalent, the work isn't over. "The Black hair experiences certainly have been more politicized," says Mitchell. "That's why the need for things such as the CROWN Act are so important. I'm proud and honored to frankly be in a position of power, and to be a living example of a woman who chooses to wear her hair natural, that's really carrying the bill forward." Because of Holly's efforts, she led California to being the first state to adopt the CROWN Act, making hair discrimination in the state illegal.

But it's not just hair discrimination in politics that drives Mitchell's cause. It's also instances in schools. "I was in high school in Riverside County, which was certainly not the bastion of liberalism," she says. "It was a predominantly white high school with predominantly white teachers that always sent the message that I wasn't acceptable. Years later, it really dawned on me the impact that could have had on my own development and sense of self as a competent, grown woman today who wears her natural hair in the political environment. How dare these educators today influence that in a negative way with hair discrimination?"

Mitchell's fight isn't in vain. Just ask Lindsey Dixon, a junior at Howard University, who aspires to teach political theory or work in governmental affairs post-graduation. She says that her experiences working on The Hill have empowered, rather than discouraged her from wearing her hair how she pleases. "I've been blessed to have workplaces and experiences that have not had a preference or a problem with the way I choose to wear my hair," Dixon says. "I've walked political hallways with my hair in every style possible: shaved very short, in an afro, colored, curled, and straightened."

She says it's Black women in the political space who came before her who encourage her to practice hair versatility. They remind her that there is no singular look or mold that she has to fit into. "One woman in particular who really reminds me of this is Joy Reid," Dixon says. "She confidently wears her curls and coils and understands the importance of being seen wearing her natural hair. Reid puts it best when she says 'Showing up as my authentic self at work means having the flexibility to get dressed up as I want to be, I say what I think, hopefully diplomatically but unapologetically, and I walk through the world deliberately as a Black woman who is determined to represent my community in every aspect and to build and encourage diversity wherever I go.'”

It's proof that as time has evolved, so have the ideals surrounding Black women and their hair. "So many Black women at all levels of politics all wear their hair in a variety of styles, which is equal parts refreshing and empowering," Porter says. "That representation matters so, so much."